(Note: I'm cross-posting this here and at Blog@Newsarama. I hate the way images appear on Blog@, so I'm posting it below, where the images are less irritating to look at/distracting from the text)

The main conflict at the heart of Kimi Ni Todoke (Viz)has a problem that will be familiar to anyone who’s seen very many American teen movies. Fifteen-year-old Sawako Kuronuma is extremely unpopular at school, and said to look like the scary little girl in Ringu, thus frightening all her classmates.

Manga-ka Karuho Shiina, who obviously has a lot more leeway than a Hollywood director, gets around that dilemma by keeping Sawako’s physical features consistent, but often framing her the way the villain or monster in another manga might be framed.

For example, here she is handing a classmate something she dropped:

And here she is saying good morning on a day she walked to school without her umbrella: 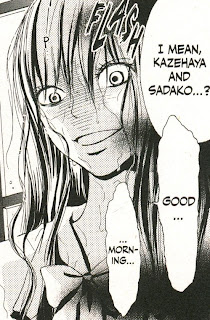 And here she is, after realizing her greetings are for some reason always accompanied by a spooky voice and maniacal expression, trying really, really hard to say good morning like a normal person: 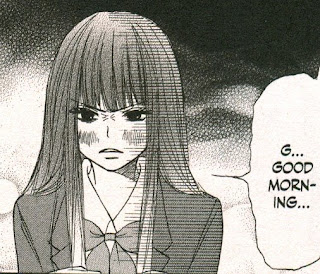 Her problems greeting classmates, coupled with her pale skin and long dark hair, added to her name being just one letter off from Ringu’s Sadako, and taking into account the weird rumors about her ability to summon ghosts or to give you bad luck if you look into her eyes too long, well, it’s not hard to see why this awkward, shy girl is viewed as cursed by just about everyone, while still being attractive.

Shiina mines the humor out of Sawako’s Casper the Friendly Ghost-like situation, while very, very gradually reversing it. Kazehaya is the only one who talks to her, which she thinks is simply because he is “100%” nice, and the constant miscommunication ever-present in these sorts of manga romantic comedies keeps the amusing tension going throughout the first volume.

Kazehaya’s niceness does begin to draw Sawako out of her shell, and her efforts to make friends with other people slowly begin to pay off, as she befriends a couple of girls in her class before the first volume ends.

Genre conventions certainly apply here, with the characters’ thoughts often overlapping with their dialogue and repeating the same points over and over, and there’s a good chance the fact that Kazehaya and Sawako can’t quite seem to recognizes that each of them wants to be more than friends could get frustrating a few volumes down the road, but this first volume was rather winning.

Shiina’s come up with a clever take on a familiar teen story that’s genuinely funny, and captures the thrill of making new friends and the joy of the dawning realization hat one belongs after all perfectly. I forgot what that felt like till I read this actually, and it was nice to be reminded.
Posted by Caleb at 12:00 PM