Here's a page from the second issue, culled from DC's Source blog (click to make it bigger, more readable and thus more laughable): 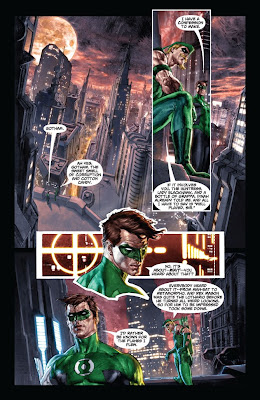 Comics readers with Internet connections have long joked about how many modern superhero writers are just glorified fan fiction writers, and while I wouldn't classify James Robinson as such based on the body of his work, he's apparently not above literally engaging in fan-fiction of the lamest sort every once in a while.

How can you make fun of a professional comics writer for writing "glorified fan fiction" when they are literally being paid to write straight superhero sexytime right into their scripts? I guess I should be thankful that Robinson merely had his characters talking about the event, rather than including a scene where he demonstrates how virile and sexy that one superhero is by having him bang two superheroines at the same time, but still, ugh.

Quick question for anyone who reads Hal Jordan and/or Huntress and Lady Blackhawk appearances religiously: Has Hal Jordan ever even met either of them in a comic before? I imagine they were all at Green Arrow and Black Canary's wedding before, and Huntress was one of the many totally random ex-Leaguers painted into the backgrounds of Cry For Justice #1, but I'm hard-pressed to think of an occasion when Jordan interacted with either on-panel. (He was dead at the time both characters started appearing in DCU comics with any great frequency after years out of the spotlight).
Posted by Caleb at 9:14 PM

James Robinson is by no stretch a bad writer, which makes the fact that Cry for Justice is such a fucking trainwreck all the more perplexing.

I'm thinking Hal got tanked on Grappa at the wedding reception, created ring constructs of Huntress and Lady Blackhawk and proceeded to embarrass himself in front of the whole DCU. I think I like my version better since it doesn't treat the Birds of Prey cast as disposable sexual playthings of male superheroes.

Where are the editors to say "No, you can't do that. You're demeaning our other valuable hero characters for a lame sex joke. Rewrite this."

Well, Lady Blackhawk did show up in Zero Hour when Hal was re-writing reality the way HE wanted it to happen. Seems like he may have just re-wrote the menage-a-trois into continuity, no?

Look, I am no prude, but this is cheap.

Otherwise, it is just fan fiction. Any amateur can magically put any two (or three) characters in bed together for a shock or a cheap laugh. It takes a professional to create plausible chemistry between fictional people and imagine that how it might make them do improbable things.

James Robinson used to be a professional.

Someday I really want to see a story where it's revealed that Hal actually won in Zero Hour and that's why the DCU now revolves around him.

"He's apparently not above literally engaging in fan-fiction of the lamest sort."

He's not engaging in fan-fiction, and he's certainly not doing so literally (whatever that means).

He's paid to write comics for DC. That makes him a professional writer. That means that every story he writes for them that gets published exists in their catalogue.

Regardless of whether his stories are any good, he's a professional writer. Until he becomes unemployed, he's pretty much incapable of writing anything that could be considered fan-fiction.

So Mr. Defined are you an angry English teacher? Or maybe English isn't your first language? Because, honestly, the rest of us seem to be able to figure out what Caleb MEANS from context, even if the PRECISE definition of what you choose to bitch about doesn't match...

He's not engaging in fan-fiction, and he's certainly not doing so literally (whatever that means)

Er, are you serious? "Engaging in" means "doing" or, here, "writing." "Literally" means he is actually doing it, not writing "glorified fan fiction," or a script that seems like fan fiction, but is actual fan fiction.

I pounded this out in a fifteen minutes late last night, so I'm not going to say it's my best writing or anything, but, wow, you sure do like to nitpick, don't you?

Whether or not something is fan fiction or like fan ficiton and whether or not you get paid for it isn't mutually exclusive; you're thinking of "amateur." And yeah, anyone writing for DC isn't an amateur, but they can be "amateur-ish."

There, I just wasted another few minutes on you. Happy?

I admire his restraint in not finishing that last line.

"I'd rather be known for the planes I flew... then for the birds I laid." ...unless that is on the next page.

"Gross" is probably the best way to sum up my reaction, too. Also: this conversation takes AN ENTIRE PAGE. 1/22 of a $3.99 comic is spent to communicate this digression to you, the reader.

I suppose this *could* be some sort of metatextual criticism on the current perception of Hal Jordan, but if it is, it's indistignuishable from legitimately wanting to do a scene talking about how Ladies Love Cool Jordan.

Jocutus: I think the editors don't shoot stuff like this down because it sells, right? Even if people buy it to laugh at it, or to enjoy the trainwreck or whatever, DC's sales department doesn't get numbers broken up into categories of "Bought this issue because they liked it" and "Bought this issue because they wanted to mock it." They just see "Whatever we did in this comic, it sold XX,XXX copies."

I keep telling myself that James Robinson has a plan; that he's working on something larger than what we've seen so far.
He can't be this much of a hack. He just can't.

Someday I really want to see a story where it's revealed that Hal actually won in Zero Hour and that's why the DCU now revolves around him.

Genuis! He could even have created the Parallax bug and wiped his own memory! That must be it!

On the next page, they meet a guy with a bum leg who walks with a cane...on the roof of a skyscraper. Hope he took the elevator.

The best thing about this is that it's the FIRST PAGE OF THE COMIC. There's nowhere to go but down from there!

And then we get to the end, when Supergirl inexplicably asks who Charles Bukowski is. Huh?

I wish this comic was a dollar so I could buy it. Right now I'm only flipping through it in the store, which is just not the same.

I flipped through it pretty thoroughly to see if Batwoman, Supergirl and Shazam/Captain Marvel/Freddie would also get to shout "JUSTICE!" when first introduced, but that did not seem to be the case.

What does it say about me that I'm STILL excited for Robinson/Bagley despite this?

Probably that I'm a big Starman/Golden Age/etc. fan. or that I really want to see a bunch of Titans and Mon El in the JLA or that I am liking (non Superman) Superman and World of New Krypton plenty right now.

Quick question for anyone who reads Hal Jordan and/or Huntress and Lady Blackhawk appearances religiously: Has Hal Jordan ever even met either of them in a comic before?

According to a poster at the new scans_daily, yes.