On the subject of Hercules, the Nemean lion, and the former wearing the latter 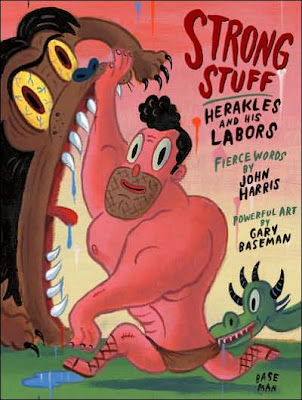 Have you guys ever seen this book? It's Strong Stuff: Herakles and his Labors, a 2005 kids picture book written by John Harris and illustrated by Gary Baseman. If not, you may want to check it out—Strong Stuff is good stuff.

Harris rather thoroughly covers the major Hercules myths, book-ending the labors, each of which get a two-page spread and a few paragraphs of discussion, with the story of Herc's childhood and afterlife. The language is geared toward grade-school kids, but it's generally pretty funny (and eductational! I always thought "Hera" was pronounced "Hair-uh," but according to this it's actually "Heer-uh." I was not aware of that).

And Baseman's art is, well, I'm sure you're familiar with Baseman's art. Suffice it to say he does a hell of a Hercules. I love the curly black hair with a big poofball in the front, the usually blank, almost vacant eyes and, most especially, the thick, manly stubble on Herc's jaw.

To give you an idea of the voice of the book, here's a bit from the Nemean Lion section:

He tracked the Nemean Lion down to its cave, went inside, and strangled it with his big bare hands. The animal protested, needles to say; but, before too long, out walked Herakles, holding the skin of the Nemean Lion—a kind of gross souvenir that he had to cut off the no-longer-living beast by using its own claw as a razor.

In his later adventures, Herakles wore the lion's skin, partly for good luck, partly because it was so tough...and partly because—let's face it—it looked so good on his extremely athletic body.

I liked how big and scary Basemen drew the lion, too. Here's a piece of the very-hard-to-scan pages featuring the labor: 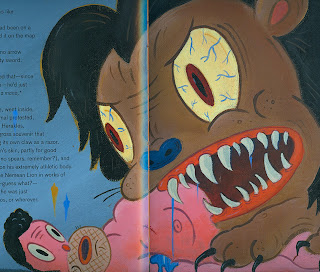 While the text says Herc strangled him with his bare hands, you can see on the cover above that it looks like he may have also applied King Kong's Tyrannosaurus Rex killing maneuver during the fight.

The next time we see Hercules in the book, he's wearing the Nemean lion, who now has x's for eyes (a gag I stole for that little cartoon I drew last week): 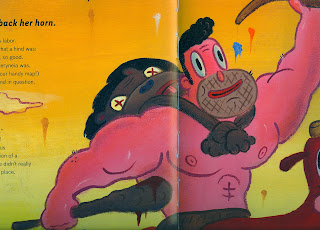 It's a pretty accomplished gag, the way the images reverse course so quickly, what with Hercules on the ropes, being drooled on by the lion on one page, and then wearing the lion on the next.

The very best image of Hercules in Strong Stuff, however, is probably the one on the table of contents: 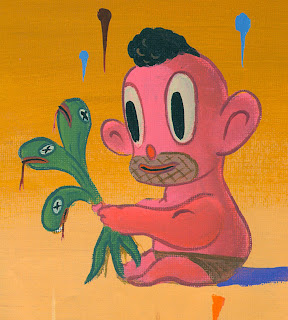 Aw, he's already got super-manly five o'clock shadow! The way Harris describes the incident with Baby Herc and the snakes is pretty amusing too: "[Hera] even tried to kill Herakles as a baby, by sending snakes into his crib, which he strangled with his bare baby hands."
Posted by Caleb at 4:44 PM

Baseman is the greatest. I think I'm one of the two or three dozen people that went to see Teacher's Pet in the theater...

Hercules was the manliest baby ever. Some versions of the myth even suggest that Baby Herc was smoking a cigar, Nick Fury-style, when he crushed the serpents in his crib.