Is this the face of comics journalism? 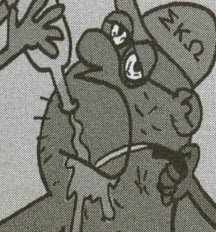 I believe so. Okay, so the other day I was in a local Half Price Books, a chain of stores that sells used books (and other stuff) at half their cover price. Hence, the name. In the clearance section, I found a copy of Sam Henderson's 2004 Magic Whistle #9 for only a $1.

Imagine! A $12 Sam Henderson book reduced to just $6 must have sat on a shelf for so long that the good people at Half Price Books must have been like, "Aw fuck it, we're never gonna sell this—let's just put it in clearance for a buck."

Since I have a Magic Whistle #9-shaped hole on my bookshelf, I picked it up and read it with great interest until I got about half-way through the story "Hippy Beach" and realized that writer, critic and comics blogger Tom Spurgeon played a small role in the story.

Additionally, and perhaps more convincingly, the above character is referred to as "Spurge" within the story, and "Spurge" is a nickname of Spurgeon's; in fact, the biography section of his site is labeled "Spurge's Bio."

Perhaps we should look at Spurgeon's role as a supporting character in a Sam Henderson comic more closely.

One night a hippy named Freakybeak is walking along Hippy Beach. You can tell he is a hippy because he has longhair, a beard, a head band, round John Lennon glasses and an acoustic guitar slung over his back. He sees a bunch of frat guys getting wasted around a fire. You can tell they are frat guys because they all have ball caps with Greek letters on them. Additionally, their leader has a soul patch.

Freakybeak is heartened by the scene. "My generation's time has come and gone. It's your time to shine," he tells the lead frat guy, handing him his guitar, which he's had since 1968.

The frat guy is excited. "Cool! We were just about to get more firewood..." he says, snatching it and tossing it into the fire. "Thanks, old dude!"

Bummed out by such un-coolness, Freakybeak returns to The Electric Love Bush, where his friends Starmother and Peacefrog are equally bummed out by his story.

Peacefrog makes a sleeve-rolling-up motion, and heads off to Hippy Beach to fuck with the rich kids who fucked with Freakybeak.

He does so in a rather novel fashion: 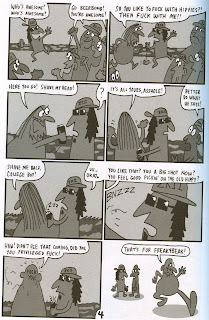 Peacefrog and his fellow hippies are dismayed by what's become of Hippy Beach, which "used to be paradise on earth...except for those lousy beatniks." He flashes back to the way they used to sock it to them: 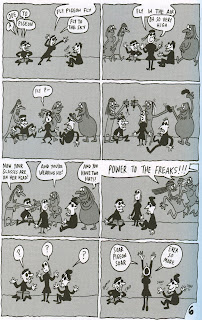 Soon Freakybeak, a Beatnik and a cop are all commiserating about their past hatred of one another, when the policeman says, "Yet here we all are together, united by our contempt for those college kids and the sanctity of hippy beach!"

They form an alliance: 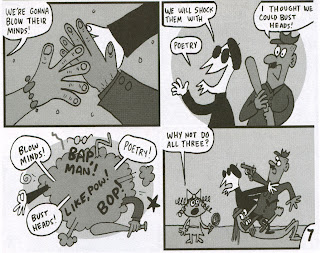 Meanwhile, this is what those damn college kids are up to: 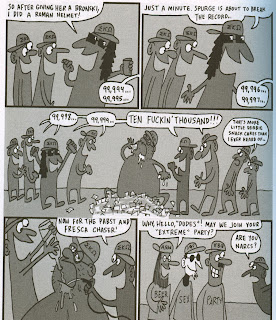 Why it's our own Tom Spurgeon, eating ten fuckin' thousand Little Debbie snack cakes and swallowing a Pbst and Fresca chaser...without throwing up! Or dying!

As you can see in that last panel, the hippy, beatnik and cop have all snuck up to the frat boys, cleverly disguised, and are immediately asked if they are narcs. 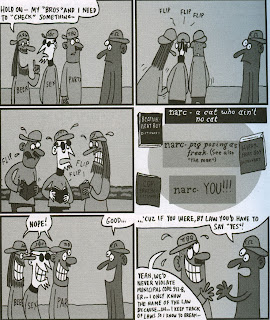 The frat boys are prepared though, since every year "the old dudes" try to infiltrate their parties.

Prepared how? Why, with this: 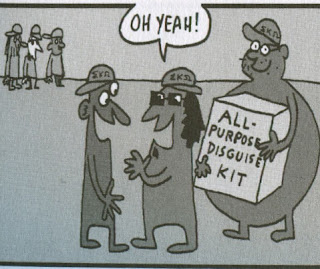 But the policeman came prepared for the frat boys' preparation, with a "Counter-Disguise Kit." That's when things get a little confusing: 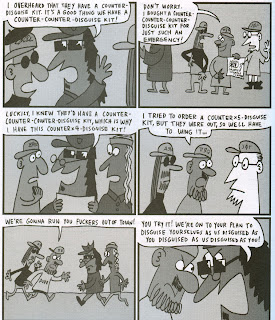 It looks like it may lead to violence, until the same little girl who broke up the beatnik/hippy/cop fight earlier appears to offer more wisdom: "Why can't you ass-cracks see the bigger picture? Stop and think for a moment...you'll figure out the real problem with Hippy Beach."

And they do! But I've spoiled enough of Henderson's story; I don't want to spoil the ending, too.

So if you haven't read it before, do keep an eye out for Magic Whistle #9, where you can see Tom Spurgeon as you've never seen him before, plus a whole bunch of other great stuff, like the adventures of Simperton J. Narcisissy, Aspiring Artist and "Gunther Bumpus Awaits a Package Which is Right Now Being Sent to him Via Express Mail by Dandy Zipper" and Pickles The Exploding Dog and the epic story of Hamburger Joe, a minor character in a lawyer comic strip who gets fired and then tries to launch his own strip.

While casting about for Sam Henderson characters to co-star in his Hamburger Joe strip, he thinks of Jack Wrongswear, who is the best: 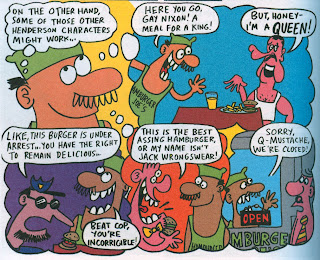 Oops. Sorry. An earlier version contained a footnote on my thoughts on the spelling of the word "hippy," but around the time it hit 200 words I was like, "Wait, I don't care about it that much, surely no one else does." So I cut that out, but I guess I left the asterisk in.