The original, 1966 Batman movie gets an awful lot of grief, but there’s one thing it does better than the half-dozen live action Batman movies to follow: It’s Batmobile doesn’t completely suck.

Of course, that movie had a giant penguin-shaped submarine and Bat-shark repellent in it too, so it could afford to have a completely ridiculous Batmobile in it and still not have detracted from the tone of the film at all.

That Batmobile was basically just a bitching black convertible with lots of bat-symbols all over it. Batman didn’t have to worry too much about people trying to steal his car or the cops tracing it back to him and discovering his secret identity, because that Batman was basically just a celebrity policeman. That Batmobile parked on a street corner was a little like a fire truck or ambulance parked on a street corner. Who’s going to mess with it?

The later movies all have a moment or three that just hurled me out of the worlds they were creating, and they all had to do with the Batmobile.

In the first Tim Burton movie, the Batmobile didn’t do anything too stupid, other than that weird scene where its has, like, armadillo body armor grow all over it. But in the sequel, it’s got a built-in hydraulic lift to turn around with, and a bunch of gadgets that seem built in to specifically battle an army of gothic circus clowns, should the need to do so ever arise.

By the time Joel Schumacher is moving the Batneedle back to the ‘60s with his soul-destroying fourth Batman, the Batmobile is driving up the sides of buildings thanks to a grappling hook.

I’m not sure where the limit of my suspension of disbelief is, exactly, but I know I’m perfectly willing to believe in a billionaire who dresses as a rubber bat, but not that he also drives a car that drives up the sides of buildings.

When Christopher Nolan re-booted the franchise with Batman Begins, the take was decidedly grimmer and more realistic, and the new Batmobile seemed to reflect that. It actually looked like a vehicle that could conceivably be used in a war zone, and I recall one film critic referring to its jagged design as a deconstruction of the Batmobile, a cubist nightmare coach. That’s cool. Or at least it was cool until Christian Bale had it driving over rooftops. What the hell, Nolan?

The Batmobile scene didn’t ruin The Dark Knight, or even hurt it as much as I think the Batmobile scene in Batman Begins hurt it, but it sure wasn’t a highpoint, either. Batman zipping around on the so-called “Bat-pod,” a video game adaptation ready motorcycle with comically large tires was probably the low-point of the film, but then, all of the least enjoyable parts were the ones with Batman in them.

The late, great comics blog Dave’s Long Box had one of the best pieces of writing about the Batmobile I’ve ever read, in which Dave Campbell details the ways in which it would actually be a pain in the ass for Batman:


As anyone who lives in or near a big North American city knows, urban driving can be a maddening experience. Heavy traffic, one-way streets, swerving buses, crazy-ass taxi drivers, potholes, inadequate signage, kamikaze bike messengers, oblivious pedestrians – don’t even get me going about parking. The shit is hard enough to deal with in a normal city in a normal car. Now just imagine trying to navigate Gotham City’s rat nest of streets and alleys in an extra-wide custom hot rod with a wonky torque converter and limited visibility.


Seriously, if you haven’t read that post yet, go read it. I’ll wait.

Campbell points out some of the better ways Batman has to get into town, like the subway rocket he used back when Chuck Dixon was writing three out of every five comics set in Gotham City. “Bat-train” might not roll off the tongue like “Batmobile,” but I thought it made a certain amount of sense; it kept the underground, cave motif Batman has going, and trains are old enough to fit into the gothic/ghost story/urban legend vibe of the modern Batman.

There’s also the Whirly-bat, which might look a little silly, but hell, at least he can park it on a rooftop before getting to work.

The easiest thing for Batman to do, however, would probably be to just get a couple of JLA transporter tubes to stash around town. Have one in the Batcave, one in his penthouse at Wayne Tower, and two or three around town, and he can simply zap his molecules around the city instantaneously.

Like costuming, transportation is something that Paul Pope apparently gave a lot of thought to when building the future Gotham of Batman: Year 100.

Pope’s Batman doesn’t have any kind of working relationship with the police in his world, and is more of an outlaw/vigilante type figure. In fact, the major conflict of the story is Batman vs. The Police State Who Want To Unmask Him. So his mode of transportation needs to be somewhat inconspicuous, and, because this is a Paul Pope coming, it needs to be something that makes sense (A New Yorker, Pope would know firsthand how difficult getting around a major North American city is in any kind of car, let alone in an illegal race car with a jet engine and monster truck wheels).

So his Batmobile is simply a very, very cool motorcycle, one that can be easily hidden, can be customized with a voice activated remote control and other Batman-style technological enhancements, and which can be disguised as a monster bat.

Here’s a scene of Robin building the Batmobile. The Robin in Batman: Year 100 isn’t so much a teenage sidekick or son to Batman’s father figure so much as his friend. He never wears a red costume and cape, but tinkers on Batman’s bikes and, later, dresses up in a bat-suit to fool the police into thinking Batman’s in two places at once.

Note the completely inappropriate quotation of a Marvel comic book, 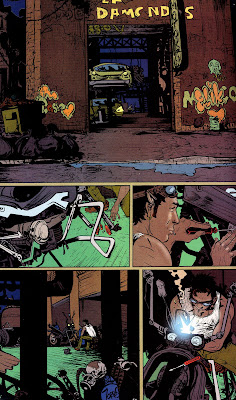 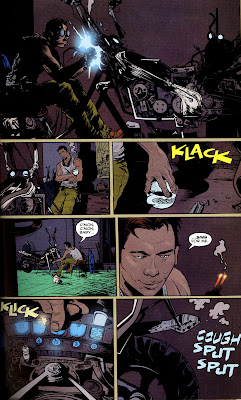 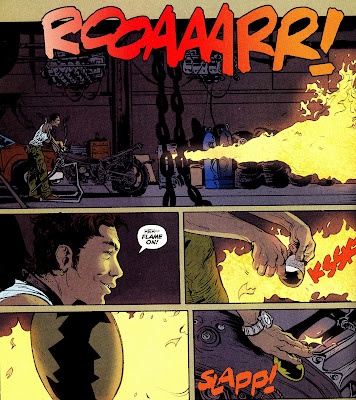 and the last-minute touch of slapping on a bat-symbol sticker.

What I like most about a motorcycle for a Batmobile isn’t the practicality of the vehicle (Batman could zip through traffic easily, if he had to ditch a bike it wouldn’t be as bad as having to ditch a super-stealth rocket limo, he could hide them in dumpsters and the backs of vans or rented out ground floor warehouses or whatever, and so on), but the way Pope has Batman and Robin package them.

Here’s the Batmobile once it’s built, all folded it up and wrapped in a tarp, so that it looks like a gigantic bat: 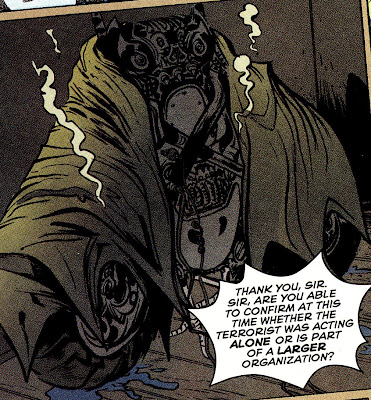 When Batman needs his ride, it can be found hanging upside down in a sewer tunnel. If you saw this huge shape in an underground tunnel, would you dare approach it?: 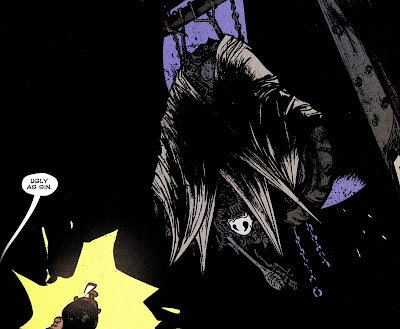 A voice command from Batman gets the Batmobile to release it’s grip on the pipe, and then it can be hastily assembled into a motorcycle which Batman can ride around making bad jokes to himself about: 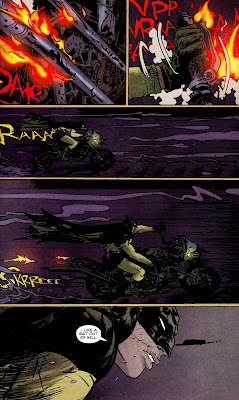 Here it is in all its glory; note the only slightly abstracted bat “face” on it: 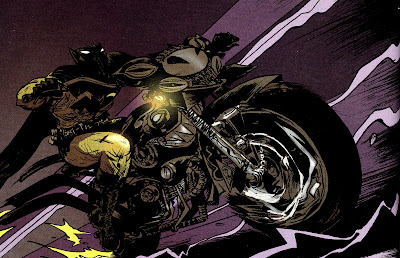 And here’s another image of Batman on his bike: 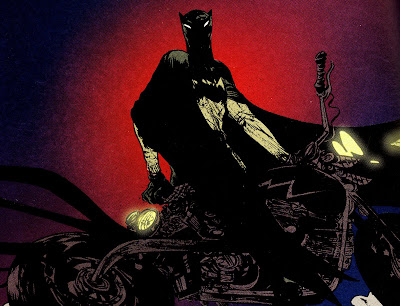 Now that is a Batmobile I can believe in.
Posted by Caleb at 6:20 PM

If I recall correctly, film critic Roger Ebert described the Nolan Batmobile as looking like "a HumVee's wet dream." ;-)

I like the concept of the Bat-Bike. It actually...makes sense.

Pope has been posting sketches from Batman:Year 100 and side-by-side comparisons of his Batbike and the Batpod on his Flickr page.

It looks awesome, especially hanging upside down like that. I can hear its engine roar in my head, demonic and distinctive, like a Harley, but possessing a rumble all its own.

And you can be damn sure that if I ever came face to face with anything like Batman in that last image I'd be dropping my shit and running like hell, for all the good it'd do me.

The problem I have comes from the combination of giant black cape and spinning motorcycle wheel.

Cape on a motorcycle though throws me right out of the story.

The best Batmobile is just a bulletproof, black-on-black Lincoln Continental, nondescript and modded on the inside. I also have equal love for the Adam West and "tumbler" versions.

I didn't buy Year 100 the first time around (because of the cover, I'm ashamed to say) but will be correcting that error in judgment this weekend, all because of Bat-Pope Week.

Thanks for the link, Seth!

And Michael, I always wondered why the whirly-bat didn't suck up Batman's cape like and cut him to bits.

The best Batmobile is just a bulletproof, black-on-black Lincoln Continental, nondescript and modded on the inside. I also have equal love for the Adam West and "tumbler" versions.

That's the version that makes the most sense, and I really like the non-descript car as a Batmobile, but it all falls down when you imagine Batman standing next to a black Lincoln and opening up the door and gathering his cape up and then scooting backwards into the seat. Batman needs a car he can jump into from above.