Some Golden Age characters DC should consider reviving because, hell, why not?: 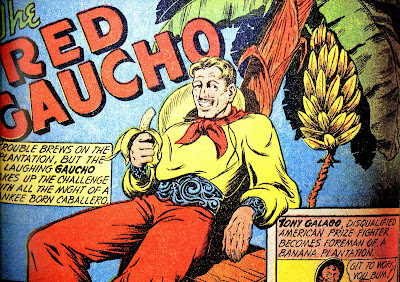 1.) The Red Gaucho: Not to be confused with Argentina’s Gaucho (a member in good standing of the Batmen of All Nations/Club of Heroes), The Red Gaucho appeared in a handful of adventures in Nickel Comics and Master Comics, but the closest he came to a cover seems to be having his name on one of the stars below bigger deal super hero Minute Man on one cover (an honor he shares with such loser characters as Zoro With One R).

Apparently, he is a “Yankee-born caballero.” As well as one very relaxed man. Just look how totally chill he is there. You can see a slightly-less comfortable looking Red Guacho in action here.

According to Les Daniels in The Golden Age of DC Comics: 365 Days, Red Gaucho “appeared in a mere six stories; then he was gone like the breeze across the pampas.”

Seems to me like he’d make a great candidate for a Booster Gold guest appearance, or inclusion in the next Dr. 13 story… 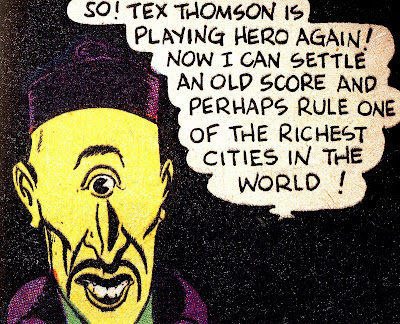 2.) Gorrah: Since Asians of all kinds seemed decidedly inhuman in Golden Age comics, this variation of the yellow-skinned, mustachioed devil doctor seems to work a lot better today than many of his peers, on account of having only one eye. He might not look like a human being, but maybe that’s because he isn’t—I mean, he only has one eye!—maybe this yellow devil is actually a yellow devil.

He also happens to really freak me out. Something about the eyebrows of Cyclopses have always upset me.

Again according to Daniels, Gorrah was a recurring enemy of Tex Thompson, the original Mr. America. Since there’s a new Mr. America active in the DC Universe again (in the pages of Justice Society of America), maybe it’s time for Gorrah to rear his one-eyed head. 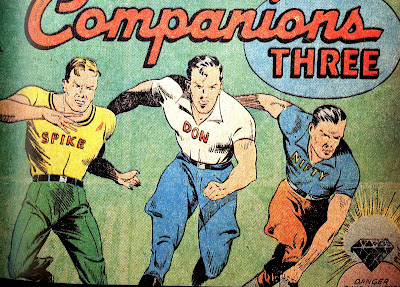 3.) The Companions Three: Yes. I know nothing about these three gentleman other than the name of their little group and their individual names, which they’ve got helpfully written on their shirts, and that they once called Master Comics home as well (And like Red Gaucho, they never seemed to have earned the cover feature).

But I’m intrigued. I like the fact that Nifty is named “Nifty” (Note to self: Nifty Mozzocco would be a great name for my son some day), and that he and Don are wearing jodhpurs and shirts with collars, while Spike just has to rebel, and go with a t-shirt and slacks. It’s like Spike was all, “Listen guys, I’ll hang out with you, let you call us by this fruity name and even have my name printed on the front of my shirt, but I am not wearing matching jodhpurs.”


(Art by Al Carreno, Bernard Baily, and Kin Platt; all images scanned from The Golden Age of DC Comics: 365 Days, which, as you can probably tell, is a pretty totally awesome book)
Posted by Caleb at 7:10 PM

I hope there isn't another Dr. Thirteen story. I think Azz said all he had to say the first time.

The Red Gaucho should totally emerge from a hibernation chamber in Argentina looking for Peronistas to fight...

It...it's the banana that gets to me. And the fact that he's eating it with SUCH a huge grin on his face.

And you can see that Spike is a little leery about hanging out with Don and Nifty. "Nifty"? I'll bet HE was teased in school.

Awesome character finds! I agree; seeing either of them pop up in Brave & Bold or something would be a hoot.

It's neat to look through and see the names that constantly recur in that time period.

I just bought that book today, mostly on the strength of this post and the one previous, but also because it was marked down to $7.99. A steal at thrice the price!