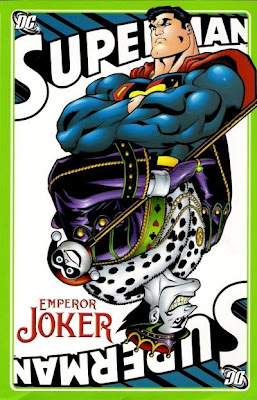 If you're reading this collection of the millennial Superman line story arc of the same name, which comprised two issues of each of the then extant four Superman books, plus an over-sized one-shot, then you already know the basic premise, as the title Emperor Joker and the crown and ermine wearing Bat-villain is right there on the cover.

The story would have been a bit more mysterious as it originally played out, however, as the first four issues merely presented the reader with a world gone mad. A semi-amnesiac Superman, now wearing a black costume and some serious five o'clock shadow, escapes from Arkham Asylum every night, using his scaled-back powers to try to figure out what's gone wrong with the world around him. And every night the leader of the JLA, Bizarro #1—a pure, undiluted, unapologetic version of the Silver Age Bizarro—fights and re-captures Superman, bringing him back to Arkham.

In this world, there's no Lex Luthor, but a bald, Lois Lane is Metropolis' maniacal, super-villain industrialist. Jimmy Olsen is Bizarro #1's pal and sidekick, Gravedigger Lad, enthusiastically tending The Graveyard of Solitude. Supergirl is a nun in a convent that worships Alfred E. Neuman, Superboy flips burgers at a fast food restaurant run by The Guardian and Steel is an asylum for scientists.

The JLA's lunar watchtower is where Bizarro meets with a group of "heroes" who look and sound more like villains—Bounty, Ignition, Scorch, Poisonous Ivy, Skizm and, um, Gorgeous Gilly—while the old Justice League are criminals appearing in strange, cartoonish forms (Martian Manhunter is more like the Martian from the Looney Tunes cartoons, for example).
No one's heard of a Batman, but every night the blood-curdling screams of someone dying horribly can be heard, and Mr. Mxyzptlk is somehow mixed-up in all of it, although he's not responsible.

The only real clue as to what the hell was going on for the four-issue prologue were the covers, which featured various members of the Superman family and various villains of the story arc in a playing card design, echoing that of the cover of the collection. 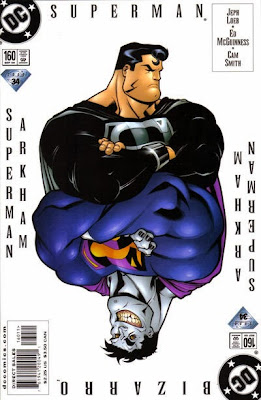 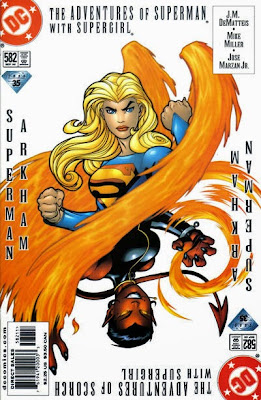 That and, of course, the fact that Superman finds himself incarcerated in Arkham, I suppose.

What the hell is going on is this: Mr Mxyzptlk had the bright idea to recruit The Joker to help him mess with Superman, intending only to grant him a tiny fraction of his Fifth Dimensional magic powers, but accidentally giving him all but a tiny fraction, so that The Joker was able to reshape the entire universe as he saw fit, with only a few tiny flaws in his now omnipotent mastery of the universe (Like the fact that Mxyzptlk is still around to offer exposition, that Superman has an indomitable will and the ability to inspire those around him and that The Joker just can't bring himself to do away with Batman, choosing instead to have him horribly killed every night...and then resurrected to wash, rinse and repeat).

I returned to the storyline just recently, inspired to revisit some previous Joker vs. The DC Universe storylines by my reading of the recent The Joker: The Death of The Family collection. It holds up pretty well, but, like all such story arcs involving so many of the always-moving pieces of a Big Two superhero universe, it's very much a product of its time, reflective of rather particular versions of the many characters (versions that have gone through a good half-dozen changes in the 13 years since it was originally published serially) and of the particular talents and publishing strategy of the DC Comics of the time.

Ed McGuinness, a quintessential Superman artist, able to rather seamlessly fuse modern, stylistic sensibilities with the stripped-down, simple designs of the Superman characters, and a real master at drawing big, beefy looking characters that nevertheless seem to bounce, float and fly weightlessly, draws the opening chapter and a later 22-page chunk of the story, as well as providing five of the nine  covers.

As this was a story that ran "triangle"-style through the Superman books and in a special, there are an awful lot of artists involved, with Mike Miller, Kano and Doug Mahnke handling the bulk of the non-McGuinness pencils, and Duncan Rouleau, Todd Nauck, Carlo Barberi and Scott McDaniel pitching in as well. It's a wide variety of artists, but it's not too hard to see them all bunched rather close together on the spectrum of cartoony, manga-influenced superhero art, with Mahnke's more realistic style being the greatest outlier—although it's worth remembers that Mahnke is a pretty consumate drawer of superhero comedy, as he's demonstrated in the short-lived Major Bummer and that Hitman/Lobo one-shot, and he acquits himself nicely here.

The writers involved were those of teh Superman line at the time: Jeph Loeb, Joe Kelly, J.M. DeMatteis and Mark Schultz.  The style of the scripting, not unlike the style of the art, shifts widely from chapter to chapter, but this being the "graphic novel" about a madman given the power to warp any and every aspect of reality to suit his whim, that's hardly the drawback it would have been in other works.

This Joker, like that in Last Laugh (and unlike the one in Death of The Family), is presented as a dark cartoon character, always making jokes and, indeed, here making the world one full of his jokes, and the sense of humor on display tends to feel pretty flat and forced, seeing that it is forced, the various writers all trying to write funny. Or, more specifically, Joker funny. As far as humor goes, it seems to work best where Bizarro is concerned, as the opposite talk with ever-shifting rules is such a perfect comic book gag, akin to the backwards spells of Zatanna or, more appropriate here, Mxyzptlk's return trip spell.
Mahnke's artwork brings much of the humor that is here to the fore too, whether it's really going to town filling in backgrounds with his idea of "crazy" imagery (which is a lot more twisted under his more realistic style than in that of the others)... 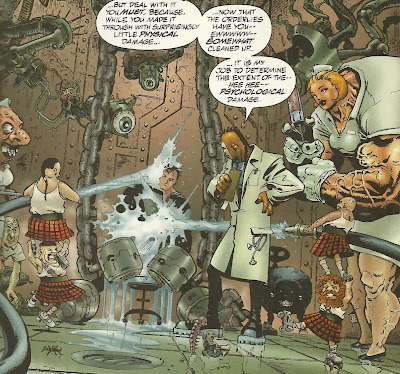 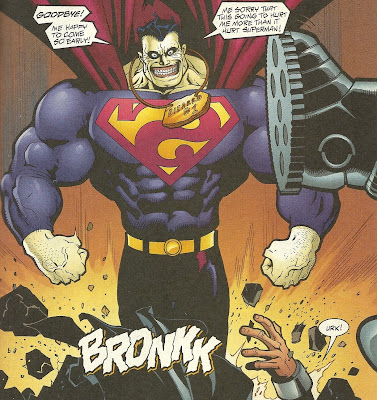 or the wide-eyed surprise on that of our hero...

As a superhero story, I suspect this might have rather sharply divided readers at the time, as it so prominently includes two aspects of the Superman mythos that some readers seem to be somewhat embarrassed by—Mxy and Bizarro—and, hell, even some DC creators seem embarrassed by them. Note chief creative officer Geoff Johns' repeated attempts to present us with a scary version of the backwards-Superman, like the monster threatening a school bus full of children in the opening arc of  his short Action Comics run, or the brutal killer version that beat The Human Bomb to death with his bare hands in Infinite Crisis #1, or the Frankenstein-like, New 52 version currently receiving an origin in the pages of Forever Evil (On the other hand, Johns did do a pretty fun story with Eric Powell in "Escape From Bizarro World," in which he presented the more traditional version of the character).

As for me, those are my two favorite Superman adversaries.

The day is eventually, ultimately saved, in a scene that would be echoed in Paul Cornell's Action Comics story arc "The Black Ring" a decade or so later, with Superman facing a Joker with the god-like powers to do almost anything, and the hero managing to exploit that single weakness, allowing the villain to defeat himself (In "Black Ring," of course, it was an omnipotent Luthor who was facing Superman at the story's climax, rather than the omnipotent Joker).

What's impressive about it is the way the writers start with Superman and then draw a circular, spinning, curlycue-ing line out from that point, until their story isn't just one of Superman fighting a Batman villain, but a story that involves all of Metropolis, all of the world, all of the DC Universe (By story's end, "The Quintessence," Darkseid and The Spectre are also involved, in addition to all of the heroes and villains and supporting characters already mentioned. Oh, and there are even some cameos like those in the panel below).

While the New 52 ultimately wiped this and these versions of all the characters out of continuity, the story was also noteworthy for a time in presenting the origin of the post-Crisis Bizarro that lasted the longest and most resembled the pre-Crisis Bizarro (prior to this, the in-continuity Bizarros were merely short-lived, failed cloning experiments conducted by Luthor) and for adding a few new minor characters to the DCU, in Ignition (who would play a role in a future Superman storyline) and Scorch (who would be involved in both future Superman stories and a significant portion of Joe Kelly's JLA run, when she dates Martian Manhunter, helps him overcome his aversion to flame, and accidentally unleashes Fernus).

It was at least well-liked enough to generate this trade collection, and to have inspired an episode of The Batman: The Brave and The Bold, in which The Joker gets 5D imp Bat-Mite's powers and uses them to kill Batman over and over, albeit it in more cartoon friendly ways. That is, nothing as grisly as the scene in this story in which Batman is eaten alive by vultures, tastefully shown just off-panel. It's actually kind of strange to see the restraint in scenes like this...

...given all the gore of the DCU of just a few years later.

There's even a scene where Jimmy Olsen apparently kills "Krypto" (Superman in the form of an ordinary dog that looks like Krypto) with a shovel, that not only happened off-panel (we don't see the shovel strike the dog, just the sound of the shovel hitting the ground), but then it's edited in a way that doesn't really make any sense, as if DC were trying to soften the act of killing a dog with a shovel.

I actually can't really make out what happened: 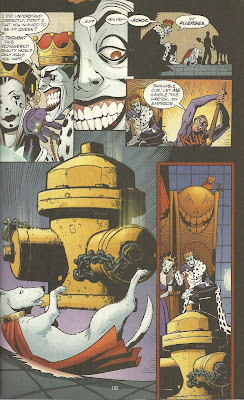 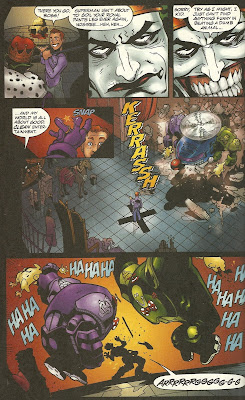 But back to the book at hand: Not bad, and a great example of Superman as the center of the DC Universe, in addition to being its greatest hero.
Posted by Caleb at 10:01 PM

Have u read the Batman/Superman story "With a Vengance"? It is the sequel to Emperor Joker.

Yes. Once. When it was originally published. But for the love of God, don't ask me what actually happened in it. I remember Batzarro, a pastiche of The Ultimates and each issue being more or less full of random things happening randomly.

In 2012, I had the opportunity to ask Jeph Loeb about this storyline and how it came to be. He said it came about as a result of, during the then-annual Superman Summit to break down the story for the next year's titles, Joe Kelly having a bit of a breakdown and making a plastic fork named Forky his imaginary friend! This then inspired the writers to get back to the goofy stuff and, eventually, bring back Bizarro.