I spent some time thinking about the Teenage Mutant Ninja Turtles this weekend, as I was writing a review of Tales of the TMNT #56. I haven't thought about the turtles or their comics that much lately, although I used to think about them a lot as a teenager.

I believe I mentioned before that the original volume of Mirage's turtles comics was one of the first series I started reading, and one of the reasons I really got back into comics in the first place. A now quite-battered and badly-yellowed collection of the first 11 issues and four solo one-shots was the first graphic novel I ever owned, and I used to read it over and over.

I also used to draw, or at least try to draw, the turtles over and over. After reading that last issue of the current volume of Tales and spending some time poking around ninjaturtles.com and typing away about Tristan Jones' script and Paul Harmon's art, the thought occurred to me that I've been drawing a lot more lately, but I hadn't tried drawing a ninja turtle in at least ten years or so now, and I wondered if I still remembered how to do it.

Without looking up reference, and using an ink pen instead of a pencil, here's what I came up with: 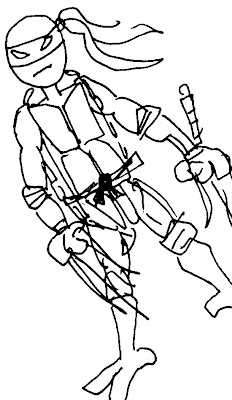 Obviously none of the artists at Mirage need to worry about their job security or anything, but I was surprised that it turned out pretty much like it used to back when I'd draw ninja turtles on a more or less daily basis back in the early '90s.

You'll notice the head is really round and un-turtley, and he's pretty spindly-limbed. That's kinda where I left off in my turtle drawing. When I first started, it was aping the chubby-cheeked, beak-having, teeth-gritting Kevin Eastman/Peter Laird versions, but I eventually gravitated toward trying to ape the work of my favorite non-Eastman/Laird turtle artists, Rick McCollum and Bill Anderson (responsible for 1991's Teenage Mutant Ninja Turtles #37, #42) and Matt Howarth (1991's #41, 1992's The Haunted Pizza special), who drew more oval, human-ish heads on their turtles, and slimmer, less stocky builds.

It was kinda weird how automatic a lot of the lines were though. I'm not 100% sure on the ratio of the chest plate sizes, but I remember the peculiar shapes of the six-piece grids that formed the front of their shells. And the way that their knee pads, elbow pads and wristbands made drawing their limbs a lot easier. Those few pieces of fabric here and there created a kind of border that gave you something to project lines towards and away from. Like, the forearm began at the elbow pad and terminated in a wrist band, the legs were neatly divided by the knee pads. And how I never knew what to do about their sides, as the shells couldn't curl right up to the chest plates or they'd cover the arms, so there was always that weird, no man's land shadowy area around their torsos.

Oh, and I remember my friends always asking about their tails, which, since they dangled between their legs, obviously reminded teenage boys of something else.

I tried a second one, 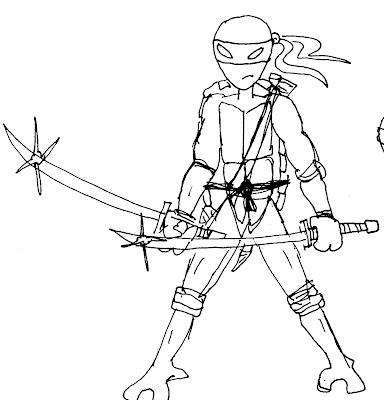 and realized I wasn't getting any better now that I was warmed up or anything.

Obviously I also used to draw The Shredder a lot too, so I was curious to see if I remembered how he went. Here's how that turned out: 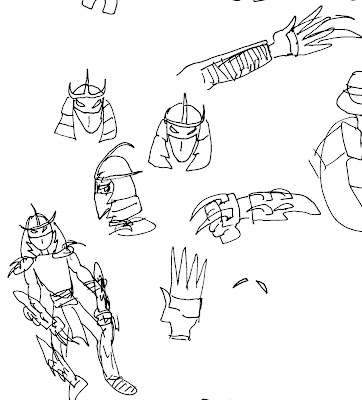 Checking against the excerpts of the Mirage comics on ninjaturtles.com, it looks like I didn't put enough blades on the shoulder pads, and I made the sides of his helmet a segment too long.

One of the things I really enjoyed about drawing Eastman and Laird's characters back then was, aside from the fact that I thought they were just all-around super-cool looking, was how fun they were to draw. I loved the way Eastman and Laird did the wrappings on The Shredder's forearms, calves and feet, and the wrapping around the grips of the turtles' weapons. Like, the handles of Leonardo's swords and Raphael's sai handles. Donatello had a wrapping around the middle of his bo staff, and I can't recall if the middles of Michaelangelo's nunchucks had wrapping or not. Like Donatello's bo staff they had really neat wood grain effect, though.

I loved drawing those wrappings 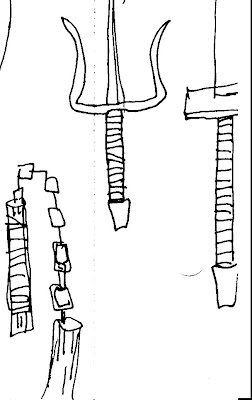 You would see drawings of ninja weapons along the borders of pretty much every page of every notebook I used during high school and college kinda like those. Eastman and Laird ninja weapons, Shredder and turtle heads, Batmen and Scarecrows. And spiders who smoked cigars and wore derby hats and a squirrel who wore a tweed jacket and used handguns. And snakes with robot arms. And jellyfish and octopuses and squids. Those are the things I used to doodle while not paying enough attention to lectures.

Finally, I tried to remember how to draw more standard, beak and big-cheek turtle heads for a little bit: 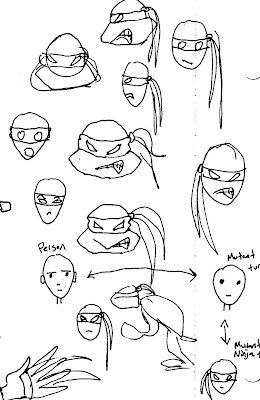 And that's how I filled up a couple pieces of paper after reviewing a TMNT comic Sunday afternoon.
Posted by Caleb at 3:24 PM

I had all my friends draw Ninja Turtles for me in Junior High... I wish I knew where that sketchbook was now.

naw man... go with the circle head. it looks better and it suggests your style.

That second one looks a lot like your traditional Caleb character, wearing a mask and a costume. I think it's the shape of the head, and the fact that you draw attention to Caleb's hairlessness.

any ninja turtle posts are always something i look foward to reading.

glad you liked the issue too. can't wait to read that one.