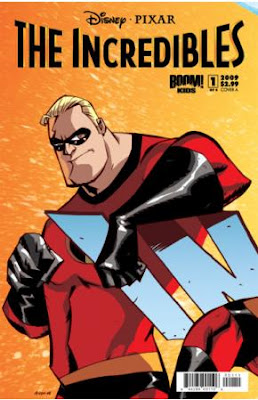 Early last week I wrote that it was "a shame that Boom is having trouble deciding if they’re in the business of telling stories or producing collectibles," based on the variant cover scheme attached to the first issue of their first licensed comic based on a Pixar movie. The Incredibles: Family Matters #1 comes with five different covers, which makes the two covers of The Muppet Show seem restrained.

The nature of the variants made their number seem even worse. One is an image of Mr. Incredible by Mike Mignola, and it's kind of neat (albeit weird to see a Pixar character design filtered through the prism of Mignola's particular style). But the other four were all part of a single image by Michael Avon Oeming, puzzle pieces that, when all purchased and lined up, form a long, horizontal group shot of Frozone and The Incredibles, all posing around a giant "The Incredibles." None of the four images really function as an individual cover, but each looks like a part of a cover. So, for your $2.99 you get one-fifth of a cover.

I admit to not really understanding variant covers or the nature of the direct market and their place in it. As a consumer, I've never understood the attraction, except for cases in which variant covers are by two different artists offering radically different covers.

Infinite Crisis, for example, featured covers by both Jim Lee and George Perez—two very popular, very talented artists each with his very own large fan base and a wildly different style from the other. That I can understand; they were in a 50/50 ratio (as far as I remember) and they therefore just offered consumers a choice between which cover they liked better. Did some people (idiots) buy both because they thought they'd worth money some day? Sure, but if those people want to give DC twice as much money for the same story, well, who can blame DC for taking it. But two Flash: Rebirth covers by Ethan Van Sciver, one showing Barry Allen putting on his boot from the front, and one showing Barry Allen putting on his boot in profile? Man, fuck that.

That's as a consumer. As a person who reads about comics all the damn time, I assumed the logic behind variant covers, both their numbers and those weird 1-in-10 or 1-in-25 ratios was to get retailers to buy more copies, inflating (non-returnable) sales to them, since, in the direct market, it doesn't matter if readers actually buy and read comics, just so long as the publishers sell them to the retailers who take on the risk of selling vs. not-selling.

So Boom's Incredibles cover strategy just seemed like a particularly egregious example of a bad industry practice pioneered by the Big Two (who, in Boom, Dynamite and others' defense, do remain the very worst offenders—the Obama variant of Amazing Spider-Man, for example, seems to border on evil), one specifically targeted for a big, splashy entrance into the direct market.

Of course, between writing that and writing this review of the issue (which I'll get to shortly, I promise), Boom has announced a distribution deal to get their new Boom Kids books onto newsstands and, thus, into a channel other than the direct market (plus, you know, the trades will sell in bookstores and to libraries, perhaps like hotcakes).

So really, I don't know what the hell I'm talking about. But man, variant covers, I sure do hate them, and it makes me a little sad to see kids being encouraged to waste their money on buying the same comic more than once.

As for what's under the cover? Writer Mark Waid and artist Marcio Takara do a perfectly adequate job on imagining and communicating ongoing adventures of the family of superheroes that were the stars of the 2004 film.

Waid knows superhero comics inside and out, of course, and has plenty of experience writing about superhero families of superheroes (most recently during his latest Flash stint, which some Flash fans complained was a little too Incredibles, and his well-regarded run on Fantastic Four), so he of course has no problem plotting and scripting this superhero comic.

During a trip to the zoo they encounter a robotic villain named Futur10n, who uses a doohickey to partially transform animals into dinosaurs (leading to the book's one striking image, an elephant whose trunk has transformed into a sauropod's long neck), and in the process of stopping them, the family patriarch faces a few problems. Not only is his family reluctant to follow his orders in the field, but he also seems to be losing his super-powers. Meanwhile, out of costume, the Parrs have dinner with their new neighbors, whom I wouldn't at all be surprised to learn are actually a family of supervillains.

Takara's art is pretty sharp, and he manages to render all of the characters recognizably without having to compromise his own skill or storytelling noticeably, a trap that awaits a lot of comics based on pre-existing cartoons. (If you get a chance, be sure to check out Takara's site; it's full of great pin-ups of super-characters. Here's his Avengers, and here's his Justice League, for example).

As solid an effort as the book is, I don't feel any strong desire to follow it going forward. Waid and Takara have turned out a decent lighthearted superhero comic, but that's all they've done. It's certainly enough, but it doesn't achieve the sort of cross-media alchemy that Roger Langridge did with The Muppet Show or offer anything completely original that can only be found here.

Of course, I'm not a kid either, so take all that with the necessary grain of salt.
Posted by Caleb at 6:13 PM

Thanks for reviewing this one. The Incredibles movie was the best Fantastic Four story I've seen in years.

Off-topic, why have you been talking about the admittedly good Batman: Brave and The Bold when you've completely ignored Spectacular Spider-man?

It's written by Greg Weisman of Gargoyles fame and mixes old school fanboy-ism (Oh my god! It's Flash Thompson's Vietnam-era wife!) and good old cartoon throw downs. Give it a watch!

You just made me realize that I used to follow the artist, Takara, on Deviantart a long time ago. Glad to see him breaking into the mainstream market.

Off-topic, why have you been talking about the admittedly good Batman: Brave and The Bold when you've completely ignored Spectacular Spider-man?

I saw three episodes of it, which were collected into a single DVD that was packaged like a movie. I think it was called "Attack of The Lizard" or something. I really, really liked it (especially The Enforcers!), and have been looking forward to a DVD collection. I can't remember why I didn't write about the DVD I did watch, I must have had too many posts planned that week or whatever.

As for Batman: The Brave and The Bold, I've been watching it on Cartoonnetwork.com, so I've had pre-DVD release access to it. Does the Spidey cartoon get posted online somewheres?

Also, Brave and the Bold seems specifically designed to please me, so I definitely get more excited and wanna talk about it more than almost any other show. (Except for 90210 and Dancing With the Stars, but those aren't comics-related, so I can't blog about 'em here).