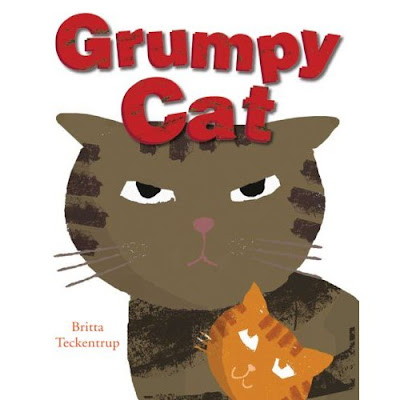 This is the cover of Grumpy Cat (Boxer Books; 2008), a children's picture book written and illustrated by Britta Teckentrup. It's a big book—12-and-a-half inches tall, 10 inches wide—and Teckentrup fills the huge spaces the two-page spreads (twenty inches!) with huge, bold (but sparsely detailed) images. These consist mostly of the two main cat characters, which look to be made of paint, but extremely well articulated. The characters seem "real" in their expressions and movements, but instead of fur and flesh and all the delicate bits that make up real cats, they're simply a few swathes of different colors of paint, if that makes sense (and it probably doesn't).

Anyway, this is one of those children's books that just bummed me the hell out.

Once there was a cat who lived all alone.

Aw, isn't that horrible? But wait, here's where it goes from pretty sad to heart-breaking:

He would sit between the trash cans and look very, very grumpy.

At night, other cats in the neighborhood would meet and play together. Cat wanted to join in, but he just didn't know how.

The other cats didn't ask him because they thought he was a grumpy cat. But really—he was a lonely cat.

Are you in tears yet? I...I have something in my eye. That takes us through the first four pages of the book.

Things work out okay for Cat, as during a rainstorm a kitten appears beneath Cat, seeking shelter. Cat tries to leave Kitten, but Kitten spends the middle section of the book rubbing up on Cat and trying to endear itself.

So everything works out okay for Cat, who is no longer Grumpy Cat or Lonely Cat, just Cat, and Kitten, as the two individuals who were all alone now had another. So I guess that's good, but man, it's so sad on the way to the happy ending.

Anyway, that's this week's recommendation for a children's book, the horribly sad Grumpy Cat.
Posted by Caleb at 8:09 PM

Okay, I just picked up "Grumpy Cat" from the library today and was reading it to my toddler, when my husband, who is a daily reader of your blog, said "Wait! I know that book!" and pulled up your blog. My toddler greatly enjoyed the book, which yes, is sad, but teaches a good lesson...

It's a sad story but my two kids love the book.