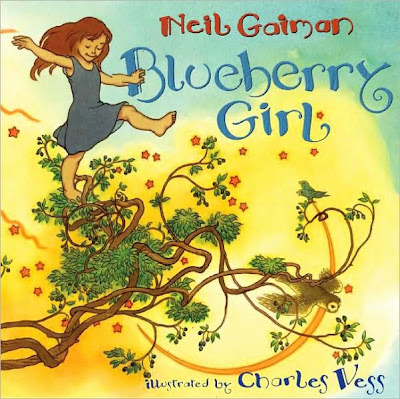 At the beginning of the fairy tale, a baby girl is born, and the fairies or wise women of the kingdom visit to bestow their blessings and gifts upon the child.

It should come as no surprise to anyone familiar with the work of singer Tori Amos that, when about to have a baby girl of her own, might think of such stories, and ask a friend to write a prayer to bless her baby.

Nor should it come as a surprise that Neil Gaiman, put in that fairy/wise person role, would see it through that Sleeping Beauty frame of reference. “Keep her from spindles and sleeps at sixteen,” reads a line in Blueberry Girl (Harper Collins; 2009), the picture book that resulted from the prayer Gaiman wrote for his friend’s daughter.

What is a bit surprising is how something with such personal origins, written for such a single person in such a specific situation, could end up being so universal. But then, that’s one of the mysteries of fiction, isn’t it, that the more personal something is, the more people who can relate to it?

And there’s a disarming universality to Blueberry Girl. Simply put, it’s an instant classic, almost certainly destined to a long life as a gift given to friends upon the birth of their daughters or to the daughters themselves for years (generations?) to come. 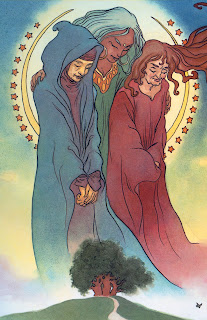 Those words appear in a blueberry juice-colored font, trickling down the right half of a two-page, single image, then, hitting the bottom of the page, rushing right to left. The image is a Charles Vess illustration, which looks to be a watercolor painting. A little, long-haired girl in a flowing green dress walks down a path, while a flock of various birds fly low over her head. Towering in the background are three giant women, the “ladies” of the lyric, a trio that falls roughly into the maiden/matron/crone triad that Gaiman so consciously employed throughout Sandman, their robes trailing off into the pink clouds of the gauzy sky.

These ladies are to whom the prayer is addressed. “First, may you ladies be kind,” the next page reads, and a series of requests are made throughout the remainder of the book. “Let her go places that we’ve never been” and “Her joys must be high as her sorrows are deep” and so on.

A second and third time he addresses “the ladies,” as those of grace, of favor and merciful night, of paradox, of measure, “of shadows that fall.” If it’s a prayer, or a supplication, its not of actual goddesses, but of symbolic ones; figures who, like Gaiman’s Endless, are not gods but like gods. Forces, aspects given faces and names so that they can be spoken to in a story or poem rather than worshipped. The actual prayer here is a wish uttered out loud to whoever’s listening, as much to the speaker-reader-parent as to the girl herself as to any abstract ladies.

The form of the piece is a poem, although it doesn’t look it (on account of each line begin given its own page, and the words not lining up in the tight, military formation of a poem) and although I can’t name the form (my formal schooling in matters of poetry and literature are too far back for me to remember the differences between a sonnet and a ballad, a septolet from a sestina).

Vess is of course an artist whose style, sensibility and general aesthetic has always meshed well with Gaiman’s, particularly when Gaiman’s at his most formal and fantastical, as evidenced in his contributions to Sandman and in The Books of Magic and Stardust.

His illustrations race with the lyrics throughout the book, following the ever-changing little girl as she walks, swings, swims, flies, marches and skps through the book, accompanied by the flock of birds and a series of animals, arriving at, last, as tiny baby girl again, in the arms of her mother, on a tiny island, in a whirlpool, circled by marine life, with land animals crowded around and birds flying in a circle around her.

As a visual set of parentheses, before the book actually begins, we see an image of a Vess-ified, Tori-like woman with a big pregnant belly, and, after it ends, we see the same woman, now looking up at her baby as she lies in a field of blueberries.

It’s really beautiful work, as is to be expected from Vess, but it’s quite a treat to see him working at a larger scale than a comic panel. (With the book opened, the page-space is 18-inches wide and ten-inches high). It’s also a treat to see him working outside of the fairy tale/fantasy realm one probably thinks of when they think of Vess’ work, even if it’ sonly just (Some of the girls where tennis shoews for example, one wears a weird little dancer’s outfit).

In each image, the Blueberry Girl herself changes size, shape, shade and age, although she stays on the same winding path through the book, accompanied by the trouping birds and animals. The metaphor is perhaps a bit obviously delivered—all little girls are Blueberry Girls—but I can’t think of a better, more subtle way to make the point visually. 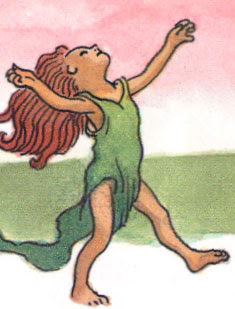 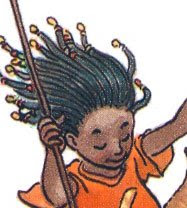 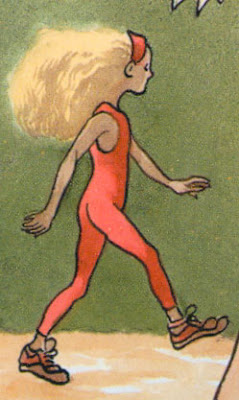 There are times when I really miss Neil Gaiman the comic book writer. The occasional Eternals or “Whatever Happened to the Caped Crusader?” are fine and all, but the Gaiman who gave us a new issue of The Sandman once a month? I think the field is poorer for him not being in it, and I sometimes wish The Sandman #300 or whatever were coming out this month.

But then I encounter a work like Blueberry Girl, and am glad that Gaiman has moved on. Not that prose is necessarily any better than comics or anything, but he clearly has things to say in other media, and some of those things are so worthwhile that not having them said would make those media poorer.
Posted by Caleb at 9:14 PM

This sounds lovely, and I'll be sure to be on the watch for it.

I'm absolutely buying that for my neices.