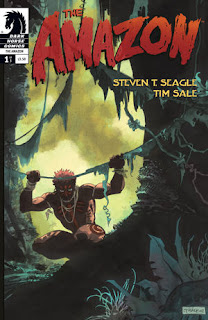 Twenty years ago—to the month!—Comico published this environmentally-minded mystery-thriller by a couple of young turks named Steven T. Seagle and Tim Sale, both of whom would go on to become much, much more famous (Seagle for Sandman Mystery Theatre, Uncanny X-Men, American Virgin and It’s a Bird…, Sale for his many hit collaborations with Jeph Loeb).

Dark Horse is republishing the series, but rather than going straight to collection, they’re republishing it as a three-issue comic series, featuring “remastered” art scanned from Sale’s originals and recolored by Mattt Hollingsworth, with a new Sale cover more in keeping with his current style.

It’s a bit more expensive than your average single issue—$3.50 instead of $2.99—but a pretty nice-looking package for the extra 51-cents. It’s 26-pages long, has a two-page title page at the beginning, features a two-page article in which the creators interview each other about the work, and features just two house ads in the back of the book.

Despite its age, the artwork is extremely Tim Sale-y, the artist having at that time already arrived at the style his fans today will immediately recognize.

The page lay-outs are really something else, with each page consisting of a stack of long, horizontal panels that stretch from one edge of the page to the other, their borders thick and hand-drawn looking, as if made with a fat ink brush or Scripto-like marker.

There are about two points where this lay-out strategy varies, during tense moments where the protagonist and narrator feels he’s being watched or is trying to catch someone, at which point the panels become tall, vertical panels reaching from the top of the page to the bottom.

The story is that of a Malcolm Hilliard, an American journalist traveling to the titular rain forest to investigate the disappearance of an American worker from a timber-clearing operation, and mysterious acts of vandalism committed there that some attribute to the vengeful spirits of the forest.

Seagle provides two streams of narration—Hilliard’s personal journey, and the final, published article he’s working on—that tell the story in a surprisingly coherent way, with the different voices and different points of view of the same man complimenting each other far better than I would have expected. (I’ve seen so many poor examples of narration in comics that I guess I’ve come to distrust it in general).

The creator conversation in the back is a lot more interesting than these sorts of things usually are, perhaps because they are now so far away from the original work. They laugh about how unsuccessful it was the first time around, and Seagle talks about how it was a conscious effort to join the creators doing “more personal, non-mainstream work, which…seemed to have a social consciousness to it” in the late-eighties, citing Maus and Love and Rockets in particular.

It’s also a little depressing, as Seagle notes that, at the time of the conversation (December 2008), “in the last five months they’ve cleared a portion of the Amazon Rain Forest that is roughly the size of the state of Rhode Island.” In the years since the Comico publication, “the Amazon has lost ten percent more of its aggregate square footage.”

Obviously the first time around, The Amazon didn’t save the Amazon, and maybe it won’t this time either (you know, a digital, paper-less version would use less trees, guys), but it never hurts to try.

If nothing else, it should find a lot more Tim Sale and Steven Seagle fans in the comics-buying public this time around, and I imagine the eventual collected version will find getting mainstream media reviews and placement in bookstores and libraries a lot easier now than in ’89.

Of course, judging a comic like this on whether or not it manages to stop rainforest destruction isn’t a very fair metric, anyway. On all of the standard criteria for judging a comic book—the quality of the writing, the art, how they work together, etc.—it’s definitely a success.

So far, anyway. It’s possible the next two-thirds will be terrible. Possible, but unlikely.
Posted by Caleb at 7:34 PM