As it turns out, Peter Spier's children's book Noah's Ark is actually a comic book 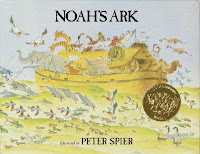 I didn't realize it until I sat down to write this post about it, but prolific children's book author and illustrator Peter Spier's Noah's Ark is a pretty old book. It was originally published in 1977, making it as old as me and Star Wars. And while I knew it won the Caldecott medal—as the shiny gold metallic stamp on the cover makes it clear— I didn't realize it won it all the way back in 1978.

So given that this is a 32-year-old book, and one that won the Caldecott, which is like the Oscar for children's book illustration, I suppose there's little to no real point in discussing it here now. But, since I've already gone to the trouble of scanning some pages from it, I'm going to go ahead and do so anyway.

And why is this children's book bear any discussion at all on a comics blog? Because Spier's Noah's Ark is actually a comic book/graphic novel/work of sequential art/"graphic book".

Yes, Noah's Ark falls into that overlap of the comics and children's books circles on a hypothetical Venn diagram. It's published by book publisher Doubleday, its format and price point are more kids book than comic book and you'll likely find it shelved with other picture books in a library or book store rather than with the graphic novels, but whatever Spier, Doubleday or Noah's Ark itself may think, it's a book told in sequential images, most of its pages divided into various grid shapes like a comic book page (there are no square blank ink borders around the "panels," but they're set apart from one another with gutters of white space.

Here's a rather typical page... 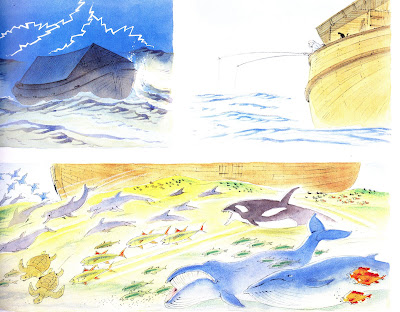 ...featuring the lucky, lucky sea life, which made out a lot better than the land-going creatures during this whole great deluge business (There must be some connection between the possession of legs and sinning against God, I think).

Some of the pages are divided into neat, even, four-panel grids, some have two or four vertical panels stretched up and down across the page. Some layout's have a top panel that stretches horizontal across two pages, with smaller panels below. There are some full-page splashes, and some two page splashes. All in all, there's a great variety in the layout and page design, and it's very smart, willful page design, using space for maximum impact (for example, after Noah and the gang have been on the water and in the storm for a while, after the whole world has disappeared beneath the waves, there's a powerful two-page single image of the arc looking tiny amid the dark ocean and dark sky that fill the rest of the pages).

I don't suppose I really need to go over the story, do I? This is the story of Noah's Ark from the book of Genesis, picking up with the construction and ending with the rainbow. It's a silent story, told without a single word or line of dialogue, which adds a bit more power to the images (since they've got to do more than they would with words, they're automatically a bit more powerful).

You know, it's a pretty damn weird Bible story in that it's probably the best known one among kids, and is so very child-friendly, what with all the animals and the boat and the storm and all that. I know I had heard it at a very young age, in books like this (or maybe this very one), probably on an episode of Super Book (my first anime!) and in (Catholic) school. I've seen more than a few sets of toys for kids based on it.

And yet, at the same time, now that I'm an adult, it sure sounds like something I wouldn't think would be appropriate for kids, being as it is the story of God killing almost every single person on earth and, even harder for a kid to process, teh vast majority of all of the animals on earth. As a little kid, it wasn't hard for me to imagine that pretty much everyone on earth probably deserved to be drowned, but animals? That's just crazy, what could an animal do wrong, really?

For the most part, Spier avoids any theology or questions of who and what deserves to die and who or what deserves to live by cutting God out of the story—or at least cutting out his lines (This also cuts out Noah trying to explain himself to his family and neighbors, or his mockery by the rest of the people who are going to get drowned). The inside front cover shows Santa Claus-bearded Noah happily working among his grape vines, a beam of light from above shining on him, while in the background a city is burning, armies are on the march, and there are dead people and animals lying around.

The next two two-page spreads show the ark being built and provisioned, while other people look on, and these pages double as the title pages, and then there's another one-page splash of Noah's family starting to load up provisions before the story really begins, with the animals being loaded up.

Spier's art is incredibly detailed; he doesn't waste an atom of the space devoted to the images, no matter how big. (In comics artists terms, a lot of these big panels are the equivalent of George Perez Crisis panels, only with animals instead of superheroes). The animals are extremely varied, including ones from far beyond Noah's stomping grounds, like moas and orangutans capybaras and Spier doesn't ge cute by including unicorns or dinosaurs among those that didn't get a seat on the ark.

He also works in lot of little, quiet jokes regarding the various animals and their various personalities, some as background gags of the old New Yorker cartoon variety, where the joke gradually occurs to one, and others as moments given their own panels.

For example, here's Noah playing doorman, putting his foot down and keeping the number of flies down to just two: 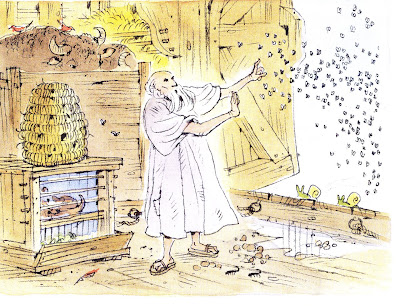 And here's the rabbits exiting the ark after the flood has ended and Mount Ararat was exposed: 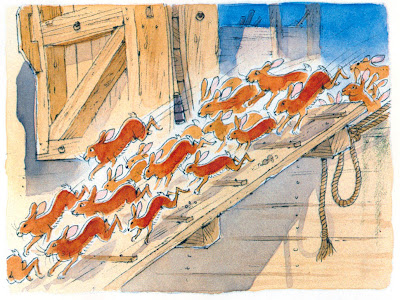 Why, look at all those rabbits. But only two went on, how did so many leave? Oh that's right, rabbits fuck like rabbits, don't they? Ha ha.

One of the things Spier does incredibly well is think through so much of his story so thoroughly, answering the little questions of how certain animals got along with others, and addressing such practical concerns like what the layout of such a boat might look like, and how Noah and his family would use the animals during their time on the ark and that there would be a great deal of manure that would need cleaned up and so on.

Here's (a washed-out, too-bright scan of) a page in which we see the bug jars Noah keeps all the bugs safely in, and the lions who, like all the predators, are caged and separated from the other animals they might otherwise eat: 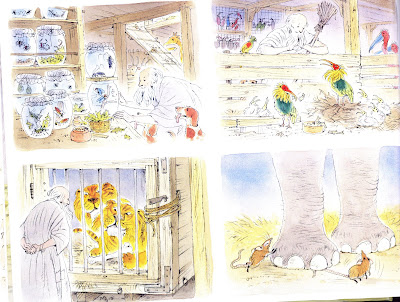 And here's a (bad scan of a) page featuring a unique habitat for the hippos and seals, a pen for the Komodo dragons (which were maybe just called "dragons" back then), and Noah picking out some eggs to keep him and his family alive while they float around, not eating any of their charges: 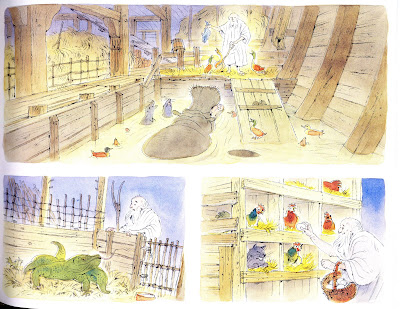 The story plays out like it does in the source material, with the mountain and the raven and the dove and the olive branch, but it's given a lot more drama and humor by Spier's particular choices on what to focus on in terms of Noah's reaction to the storm and the branch and so forth.

It ends with a two page spread, showing the incredibly detailed interior of the arc, no sans animals (save for he cats who are still hanging out inside, and the snails and tortoises still making their way towards the gang plank), but full of signs of a long stay. And then, as the beginning of the story began on the inside front cover, so it ends on the inside back cover, with Noah planting a new garden, and only unspoiled nature in the background, instead of a burning city at war.
Posted by Caleb at 6:01 PM

Nice review! I may have to pick up this one for Mighty Mite. :-)