All I see on the skyline is a gigantic phallus 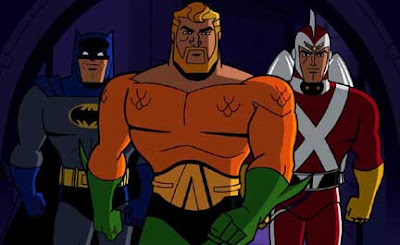 (Above: The brave, the bold and the also bold)

—Wow, I have no idea who this villainous dude in the black and white costume is supposed to be.

—Interesting that the makers of the show went with the original Vic Sage Question and not the current Renee Monoya one, since they used the current Blue Beetle (Jaime Reyes) and The Atom (Ryan Choi), both of whom debuted as new legacy characters around the same time that Montoya was replacing Sage as the Question.

Maybe it’s simply a matter of character design, as the Montoya Question always looks really, really stupid. Well, I shouldn’t say always. I like the one panel of her that Doug Mahnke drew in Final Crisis #7 (if that was her, and not an alternate earth Question), and I didn’t read the DC Presents 52 Aftermath: The Crime Bible—Five Books of Blood (Starring The Question and Featuring Batwoman [But just a little]) Book One or whatever that miniseries she was in was. But n 52, Countdown and FC: Revelations? She looked pretty horrible in different terrible ways.

—Oh, this villain dude is named Equinox…? I imagine he’s an old DC character, but I’ve never heard of him.

—Nice use of theremin over the “Mystery In Space!” title. (Fun fact: Word doesn’t recognize the word theremin. Actually, there’s nothing really fun about that fact).

—I like how Batman explains to viewers why he said “solo mission.”

—Man, I really like Aquaman in general, but this version of the character, who seems a lot more like Marvel’s Hercules than any version of Aquaman I’ve seen in any comics or any cartoons? He’s totally sweet too.

—Didn’t the Martians copyright the use of tripods in interplanetary war? I think the Gordanian invaders might owe J’onn J’onnz royalties or something…

—The music in this episode is just awful. There are all these cheesy guitar rock moments, and some awful ‘80s television dramatic moment music and…bleah!

—Another action figure-ready Batman costume! Underwater SCUBA Batman. Does Batman put on a different customized costume or transform into some kind of monster/animal in each and every episode of this series?

—Hey, Aquaman’s telepathy sounds the same in this cartoon as it did in Super Friends. That’s cool.

—Rannian underwater technology is the same as Atlantean: Folks just wear bubbles on their heads.

—Jesus, the reason for Aquaman’s sadness is pretty…sad isn’t it. And there’s nothing you can do to stop assholes from killing whales, kids! Except donate money to Greenpeace.

—Stupid girls, always causing problems…getting captured and needing boys to save them…

—This is a nice Grant Morrison-y plan Aquaman has: To save Rann, we’ll need to steal Earth’s moon and place it the skies of this planet, creating an eclipse!

—General Kreear has a neat, Starscream-y accent. Not as awesome a voice as Starscream or Cobra Commander, mind you, but an accent that reminds me of theirs…

—And now Adam Strange and Alana re now making out on top of that giant phallus! This is a kid’s show?
Posted by Caleb at 9:45 AM

Best line: "No, my interplanetary sweetheart!"

I presume that Equinox is a revamped version of Libra (with a smilar astrological/balance motif.) They've done that sort of revamping with a few villains (Funhaus as not Toyman/Prankster, Slug as not Tobias Whale, and a villain you'll see next week.)

The alternative is that he's Power Girl's kid (who actually went by Equinox.) But I can't imagine any way the animators could even try to explain that set up.

God, I love this show.