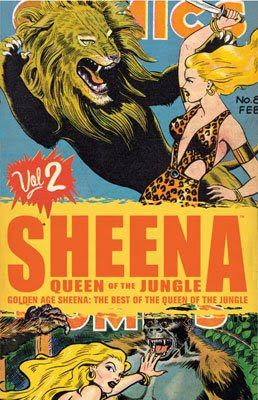 The Best of the Golden Age Sheena Vol. 2 (Devil’s Due Publishing) I had the first collection of Vertigo’s Air in my hand, intending to buy it since it was such a light week on new super-comics (and it was only $9.99! That’s a damn good value!), but then I saw this, and figured Air Vol. 1 will still be there the next super-light Wednesday.

I’ve been curious about the original Sheena since I read that old copy of Jules Feiffer’s The Great Comic Book Heroes that I quoted extensively during last summer’s Jules Feiffer’s Superhero Week, as Sheena was the only character Feiffer discussed at any great length that hadn’t since fallen under the ownership of either DC or Marvel (and Feiffer wrote that Wonder Woman didn’t look like she’d last a round against Sheena).

Additionally, this past month or so I started watching the Johnny Weissmuller Tarzan movies—all twelve of ‘em!—courtesy of a couple of DVD collections at the library, and have therefore been very interested in and excited about the 1930's/1940's jungle adventure genre (If you haven’t seen any of these, by the way, Tarzan, the Ape Man and Tarzan and His Mate are both incredible; the rest of ‘em have their charms, but those first two are just crazy good…and remarkably sexy and scary, being pre-Code).

So this is the trade I got this week, since there weren’t many single issues of interest out.

I’m only a few stories into it—I’ll write a full review for Blog@ this weekend, if you’re interested—but it’s a really nicely designed package, and includes not only an introduction, but also some amusing annotations by Steven E. De Souza (Example: “A tiger, in Africa? What kind of lunkheaded writers and editors put a tiger in Africa?”), and, in addition to the reprinted Sheena stories and a Sky Girl story, there are some vintage ads.

Oh, and while Air had a lot of blurbs from comics creators I respect and various mainstream-ish media outlets, the blurb on the back of this is from Frederic Wertham’s Seduction of the Innocent: “Torture, bloodshed, and lust in an exotic setting!”

That Wertham sure knew how to sell a comic book, didn't he?


Black Lighting #6 (DC Comics) Jen Van Meter and Cully Hamner’s re-telling of Black Lightning’s origin, necessary in large part to make some sense of all the random-ass retcons Geoff Johns, Judd Winick and others have done over recent years, complete. It’s decent enough, although, the main drawback of this issue being the way Van Meter’s narration conflicts with the other narrative threads, the dialogue and the art. It doesn’t conflict violently; that is, it doesn’t’ contradict or negate those threads in anyway, it just adds a lot of friction, with the unnecessary narration over-stuffing the information flow on each page and falling in unnatural places, making the reading less natural than it could (and probably should be). And I still think it went on about four issues too long. Anyway, it won’t go on any longer.

Question time! The next issue box reads “Follow Black Lightning in…The Outsiders.” Does that mean B.L.’s no longer in the Justice League? Or is he on both teams now? I don’t know because I had to quit reading JLoA on account of it being terrible, and I quit reading Outsiders because they insist on changing the creative team, the cast and the book’s direction on a bi-monthly basis. So I have no idea what Jeff’s team affiliation is at the moment.


Marvel Adventures The Avengers #34 (Marvel Comics) Paul Tobin writes and Matteo Lolli and Christian Vecchia draw a time travel tale teaming the Avengers with Sgt. Fury and his Howling Commandos. I hesitate to say much about it for fear of spoiling any of Tobin’s gags, but, if it helps sell it, I should note that the fact that it includes a scene of Spider-Man fighting house cats and another of ancient Egyptian charioteers riding on Segways.


Mysterius The Unfathomable #3 (DC/Wildstorm) Mysterius and company defend a clients house against a siege of Dr. Seuss monsters. It’s a neat idea, as is the whole bit about the creatures of Seuss books actually being demons from hell and the words of the books being coded chants to summon them, but, due to legal concerns, they’re actually “Dr. Gaust.”

On its own, that would perhaps be a reasonable and understandable substitution, but the issue opens at the scene of a David Blaine-like stunt-magician’s murder, and includes a panel referencing the “John James” massacre where his followers died from drinking poisoned Qwench, and I think the Anton Szanador LaVey stand-in reappears on the last page and…Gah, that’s just a whole hell of a lot of fictional stand-ins for real people in a single story, you know?

And I don’t know that they’re all entirely necessary. Certainly artist Tom Fowler couldn’t have drawn The Grinch and The Cat in the Hat stalking our protagonists without fearing being sent a strongly-worded legal document, but certainly the name “Jim Jones” could be used, couldn’t it?

For whatever reasons writer Jeff Parker and Fowler chose to half-disguise these various elements, the sheer amount of them in this issue overwhelmed the actual story (at least form where I sit).

I’m not dropping the book in disgust or anything, but I think it was overall the weakest issue so far, as evidenced not only by that aspect, but also the forced plotting of the sister and nephew being introduced a panel before they were needed to perform. 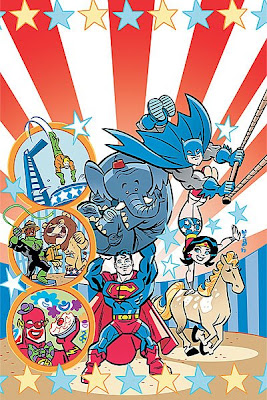 Super Friends #13 (DC) Because it was such a light week, I impulse bought this based on the fantastic-as-always J. Bone cover. The story within, by Sholly Fisch and Dario Brizuela, is pretty weak, but perhaps serviceable—unlike some of the other Johnny DC-branded books, Super Friends is a kids comic rather than an all-ages one. And be warned, if you buy this just to see John Stewart play lion tamer or The Flash dress up like a clown, you will be disappointed. Unless you consider a fat bearded lady dressing up as Wonder Woman or a clown dressing up as Aquaman just as good, in which case you won’t. 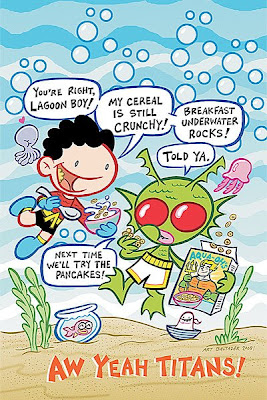 Tiny Titans #14 (DC) Huh, Aqua-Oh’s don’t just stay crunchy in milk, they stay crunchy in milk underwater? So, this issue the Tiny Titans try to figure out what exactly Lagoon Boy is after a pet club meeting on Paradise Island, Cyborg invents a super-powerful remote-controlled vacuum cleaner, Beast Boy and Miss Martian have a shape-change off and the Wonder Girls visit Cecelia the Cyclops.


Trinity #42 (DC) It’s weeks like this, weeks during which no new super-comics dealing with ongoing super-universe soap opera stuff come out, that I really appreciate a book like Trinity. When there’s nothing else, there’s always this, you know?

As I’ve noted before, the pacing is somewhat off with the book, something which has become more apparent as it gets closer to the conclusion, and the resolution of certain plot points become more and more apparent. Toward the beginning, when disparate story elements were being introduced, the speed of the pace didn’t seem to matter, as it wasn’t clear how they would all eventually connect.

Still, superheroes! And lots of ‘em! Just when I needed ‘em!

The Kurt Busiek/Mark Bagley opener features the still semi-divine Trinity continuing to put the DCU back in order, with villains, heroes and Alfred and the Supporting-player Squadron all resuming their natural forms. In the back up, this week hastily scribbled by Scott McDaniel, the JSoA and JLoA part ways, and Hawkman and Gangbuster become more prominent players once again.
Posted by Caleb at 3:12 PM

The reason you mention for appreciating Trinity this week is exactly one of the reasons DC has said they are committed to the weekly format. If there is absolutely nothing else of interest in a given week, there is always Trinity (or 52, or whatever).

I've enjoyed the first 26 issues, but I'm way behind from there on out.

I don't know if you hauled this in but that Batman mag with King Tut? I have one question: where the heck have Garcia-Lopez and Nowlan been all these years. Hot damn the art in there was good. Oh and Trinity is something I always buy-even when I only get 2 mags. I dig the weekly format.

Try checking out Tales of TMNT #56.
It's definitely a good read.

Black Lightning is now dedicated to the Outsiders only, or should be anyway because the new Outsiders team it's intended to be really "outside" which means no contact with anyone beyond the team, so he couldn't be in the JLA also. But, who knows, maybe he will be there anyway.

I don't know if you hauled this in but that Batman mag with King Tut?

I read and reviewed the first two issues of it; the third installment wasn't out this week, was it?

Oh, I did. I reviewed it at online home away from my online home. Here's a link:


Black Lightning is now dedicated to the Outsiders only, or should be anyway because the new Outsiders team it's intended to be really "outside" which means no contact with anyone beyond the team...

Huh. I wonder how his wife likes that... Anyway, thanks for the info!

Whoops. My bad. I see you agree about the art.