A transciption of me talking to the screen during the last two episodes of Batman: The Brave and The Bold

—Oh shit, yeah, this must be an evil universe.

—You know, Red Hood is a pretty cool costume, for a hero or a villain. I probably haven’t mentioned lately how much I hated Jason Todd’s Red Hood look, where he wore what looked a little like an off-brand Spider-Man mask on his head and normal street clothes. The next version, the one he wore in Countdown, where he even lost the helmet and just went wit a little eye-mask and street clothes also sucked. Neither was as cool as his Hush's look, nor as cool as this Red Hood’s look. You can't beat a tuxedo with a big red cape and an opaque red dome-shaped helmet ensemble.

—Bat-signal, Commisioner, Riddler, Batcave…I didn't start watching this series until halfway through the season, so I don't know if this is the first time any of these familiar Gotham City elements have appeared or not, but, if not, they're at least very rare. This is certainly the first time I've seen any of them on the show, and I took part of the show's premise to be that it was Batman in different settings with different friends and foes than those you've seen in his prior TV shows.

—That’s a pretty cool Owlman costume. It looks like an Elseworld’s Bat-costume I’ve seen before in the coloration, but I can’t remember where exactly.

—The owl eyes are particularly cool. When they light up like that and he smiles, he looks like one of those creepy Felix the Cat-style clocks with the swinging tails.

—Hmmm….how’d Batman get Owlman’s costume off him without removing the straight jacket first…?

—“Like looking into a fun house mirror…of evil!” Yes. This show has some fantastic dialogue.

—It occurs to me that this episode if chockful of action figure designs. Like, all the toy-makers would have to do is change the paint jobs, and they’ve got evil duplicates of most of their hero figures.

—Hmm, Batman was wearing his Batman costume under the Owlman costume? I bet he was sweating bullets the whole time. 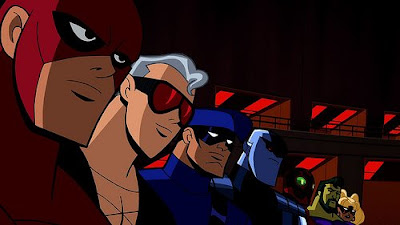 —Ooh, I like the evil Plas’ look! And Yellow Lantern has a pretty neat costume too…it’s cooler than Sinestro-as-a-Sinestro-Corps-member's version of a "Yellow Lantern" costume, actually.


“Game Over for Owlman!”

—I don’t like the fact that Batman’s gear is all red-on-black, while he wears blue and gray. It bugs me for some reason; given his obsessive qualities and the way he marks everything he owns with his logo, Batman seems like he'd be all about color coordination.

—Awesome! First appearance Batman! I do so love that costume!

—Batman can’t have spider holes! Those are Saddam Hussein things! It’s cool that he does though…Especially since they open up in such comically unlikely places, like inside a hot dog cart…

—Highfather…? No, the Joker. It’s not a New God power crook that reaches out to grab Batman from off-screen, it's a vaudeville cane hook, of the sort they'd use to pull lame acts off the stage.

—Batman and The Joker in an unlikely Brave and The Bold team-up! Where have I seen that before…?

—And the classic Batmobile! Oh God, I love you Batman: The Brave and The Bold!

—Okay, I'm used to the Joker’s voice now. I guess it's actuall kinda refreshing not hearing Hamill, even though I like Hamill’s Joker voice better. It’s much more scary and crazy, but I do like this Joker’s thespian-like, showmanly voice.

—SQUEEEEEAALLL! Look at all the Batmen! Kelley Jones' vampire Batman! Pirate Batman! The Bat-Hulk! And a fucking cowboy Batman!?!?! Okay, that clinches it: Batman: The Brave and The Bold is officially the greatest thing to happen in the history of television.
Posted by Caleb at 3:24 PM

Just watched 'em. Pretty damn sweet. I got used to the Joker eventually. I still love Aquaman (maybe too much...)

Just watched the latest with my family tonight. Was massively entertained by my two-year-old shouting "ADAM STRANGE!" every time he would appear on screen. Of course, that was nothing on my four-year-old, who flipped out that Etrigan was in the preview for next week. He inexplicably loves Etrigan. Yes, I have doomed them.

This show is every Batfan's dream -who would have thought after The Animated Series and Justice League and Batman Beyond that they had run out of ways to make me smile - but old school B&B? MMMM Boy that is good cartoon. But that sad Aquaman kinda freaked me out when they finally stopped him from being the grumpy king of the sea. I prefer the blowhard braggart who you just want to follow into adventure. Great times to be a geeky fanboy.

This show is every Batfan's dream -who would have thought after The Animated Series and Justice League and Batman Beyond that they had run out of ways to make me smile - but old school B&B? MMMM Boy that is good cartoon. But that sad Aquaman kinda freaked me out when they finally stopped him from being the grumpy king of the sea. I prefer the blowhard braggart who you just want to follow into adventure. Great times to be a geeky fanboy.

"Written by Joseph Kuhr? Or “Joe Kuhr?” Or Joker? That can’t be a real name…"

It actually is, as screwy as it may seem.

This crazy show just keeps getting better and better. I'm just so happy every Friday to see characters OTHER than Superman and Wonder Woman show up.

Have you seen the trailer for the Arkham Asylum game? Plenty of Hamill-y goodness and OG Batman voice Kevin Conroy