Do you know what yesterday was?

Er, yeah, it was Sunday. But do you know what else it was?

EDILW favorite Freddie Prinze Jr.* turned 33 yesterday, and I’m afraid I’m a little late in wishing him a happy birthday, on account of not being near a scanner this weekend.

So I guess we’ll just have to celebrate FPJ’s B-Day one day late this year. And there’s probably no better way to celebrate Freddie Prinze Jr.’s birthday on a comics blog then by blogging about his most famous comics appearance, in Mark Millar, Bryan Hitch and Andrew Currie’s 2002 series The Ultimates, in which he fought the Hulk. 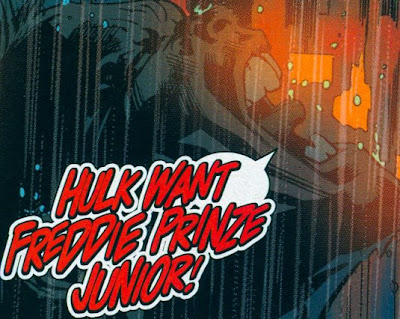 It can be kinda hard to remember way back then, back before Mark Millar became the megalomaniac we all know and love/loathe today, the self-aggrandizing parody of the writer he was in those pre-Wanted: The Movie and Civil War days. Back then he was just a very talented craftsman who had segued from an impressive if underappreciated run at DC Comics to the opportunity to reinvent Marvel’s icons with Brian Michael Bendis for the new Ultimate line.

While Bendis focused on character and personal melodrama in Ultimate Spider-Man and Ultimate Marvel Team-Up, Millar tackled the X-Men and Avengers franchises, reinventing them as big special effects-laden action movies that just happen to be on paper instead of film (Essentially taking Warren Ellis’ approach to the Justice League in The Authority, which he had taken over after Ellis left, and applying it to Marvel’s heroes).

Both Bendis and Millar went about the process of updating the forty-year-old concepts for the new millennium, in part by peppering references to modern pop culture (which, at the rate pop culture now refreshes, now tend to make those stories seem oddly dated). Millar took things a bit further than Bendis did by not only dropping verbal references to whatever the popular TV shows and bands were, but by inserting celebrities and their likenesses into the narrative of The Ultimates, making the story’s future place in comics held somewhat hostage to the successes and failures of those celebrities.

In the first Ultimates story arc, collected as a trade under the name The Ultimates Vol. 1: Super-Human, for example, not only did Millar and Hitch “cast” Samuel L. Jackson as Nick Fury, and indulge in the common practice of inserting real-life news personalities into the story (Larry King interviews Iron Man in one scene), but we also have celebrity cameos of 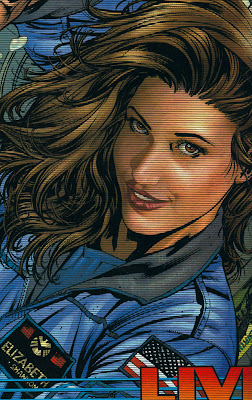 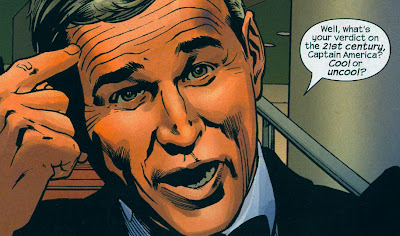 this goofball, and, of course, the subject of this post, Mr. Freddie Prinze Jr.

FPJ figures rather prominently in the story arc’s climax. After being beaten down by circumstance and regularly shown up by the likes of Hank Pym and Tony Stark, Dr. Bruce Banner decides to do something kind of stupid, and reinjects himself with the serum that had previously transformed him into The Hulk.

In Ultimates #4, he calls his ex-girlfriend and the Ultimates’ press agent Betty Brant to warn her that he’s about to turn into a big, scary monster that will probably attack her. When he calls, she’s in the middle of having dinner with Freddie Prinze Jr. 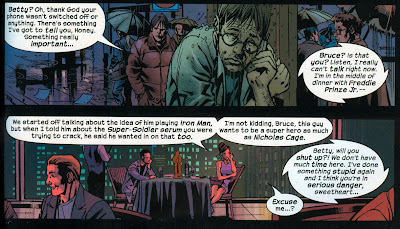 As we now know, FPJ didn’t get the role in the Iron Man movie, which, as much as I like his work, is probably for the best, given how Robert Downey Jr. owned the role. Nor did FPJ ever get to join The Ultimates (But only because Marvel rejected my pitch for Ultimate Freddie Prinze Jr. One-Shot).

Banner collapses in mid-phone call, and is in the back of an ambulance when the serum kicks in, and he bursts out of the ambulance, in one of my favorite Hulk panels ever, the “HULK WANT FREDDIE PRINZE JUNIOR!” one above.

The issue ends with the team suiting up for action for their first mission, and in a very Millar cliff-hanger ending, Ultimate Captain America poses in front of his posing team and announces the plan for defeating the Hulk: “We just hit him until he drops."

In Ultimates #5, The Hulk finds Betty and FPJ, and attacks the restaurant they’re in: 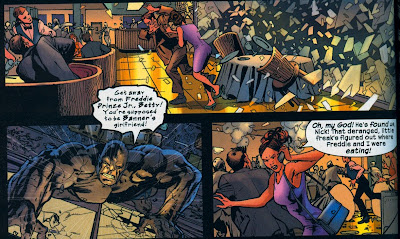 The Hulk manages to jump up to their helicopter, where he makes his final plea with Betty:

Oh man, hanging off a helicopter by our fingers screaming at the girl we loved and who we thought loved us back that Freddie Prinze Jr. can’t love them the way we can…who hasn’t been there before?

And then The Wasp climbs through Hulk’s head and applies a wasp sting to his frontal lobes, which makes him fall out of the helicopter and transform back into Bruce Banner and then Captain America sucker-kicks the scientist in the face because Ultimate Cap is a total dick, the end.

So happy birthday Freddie Prinze Jr., and thank you for all the many hours of entertainment you’ve helped provide me with over the years!

And for either giving permission to use your name to Marvel (or just not suing them for using it), so that The Ultimates’ origin story included you cock-blocking The Hulk.


*No, seriously. She’s All That is one of my all-time favorite movies. I’m serious! I swear to God. Look, see this? 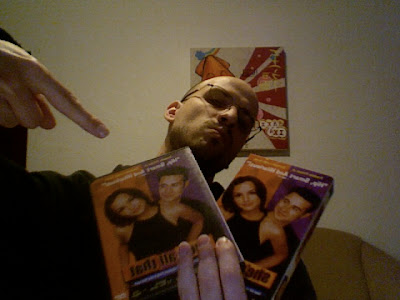 That’s She’s All That in two different formats. And while it is by far my favorite of his romantic comedies, I have seen every single one of FPJ’s movies. Repeatedly.
Posted by Caleb at 8:41 PM

I can't stand it when people make this comparison. It demonstrates almost as much of a lack of descriptive wordpower as those comic creators who lack the imagination to utilize the comics medium and instead feel they should ape another.

It's not a movie. No comic is a movie. Even those Miyazaki manga books that take actual movie stills and print them in the book - that's not a movie either!

If an artist conveys movement, direction, speed, intensity, ambience, or a distinct mood on the page, then those are the aspects you talk about. A talented comic book artist who draws realistic illustrations is not making a movie.

Nor is film a "higher art" that comics should aspire to. If you really feel that way, you probably shouldn't be reading comics.

Hdefined is one cranky dude. Anyway, your love for Fredie Prinze Jr means you probably watched his sitcom right? His awful, awful sitcom? The dude is just a black-hole of suck. I blame him for the stall outs of the careers of Matthew Lillard and Sara Michelle Gellar...

Also Millar's Ultimates books REALLY don't hold up well. Not even after a year or less of when I first read them. Same for his run on The Authority

Er, I know. I assume many of the people who make this comparison also know. It's a metaphor.

If an artist conveys movement, direction, speed, intensity, ambience, or a distinct mood on the page, then those are the aspects you talk about. A talented comic book artist who draws realistic illustrations is not making a movie.

Actually, while I think Hitch is quite a talented draftsman and has some pretty good design chops, I don't thing he does any of that stuff you mentioned. I do think he and Millar approached Ultimates as if they were making a movie though. And while I just wanted to talk about FPJ instead of The Ultimates in general with this post, I think a critic discussing Ultimates without discussing that aspect probably isn't doing a very good job of discussing it, considering how heavy that "let's make a movie of a comic!" aesthetic is. I mean, they cast an actor in it!

Whenever someone tells me that FPJ (or Tori Spelling) has never been in a good movie, House of Yes is always the example I turn to.

I did! And now I can't remember if I gave up on it, or if it was just canceled after like six episodes. That had the double appeal of FPJ and Brian Austin Greene from 90210, a show I adore. And yet I can't make a case for it not sucking.

FPJ was pretty good as William Shatner's sson on Boston Legal though.

"I do think he and Millar approached Ultimates as if they were making a movie though."

Which is sad enough in itself. No one needs to encourage them as if they had actually done so, though.

Ultimates is no more a movie than any other comic. Sin City and Watchmen became movies, but their comics forms are still only comics.

No, they didn't cast an actor. Hitch drew an actor's likeness. The actor is not actually in the comic, nor is he contributing dialogue.

I'm disappointed that this cross-media lingo has rubbed off on you. Do you also like to buy Marvel's "direct cut" variants of comics? Do you get a lot out of their "DVD-style extras"? Do you get excited when a new "season" of a comic debuts?

Oh shit, you're right! I better go back in and put quotes around the word cast for any early-readers in the audience who think I meant Mark Millar and Bryan Hitch literally cast Samuel L. Jackson to play the role of Nick Fury, and used the bleeding edge motion capture technology of Marvel Laboratories to record his performance in The Ultimates.

And as soon as I get done doing that, I'll be sure to add footnotes throughout this post and every other one I've ever written to clearly communicate to readers when terms are used as metaphors, or ironically, or as jokes.

I'm not hiding my identity. This is my gmail login name. If knowing my real name will magically give my comments greater validation from you, feel free to ask for it.