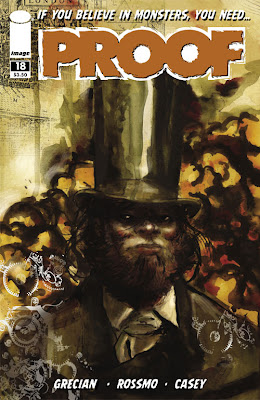 I’ve never read an issue of Proof, the Image Comics series that seems to be about Bigfoot and other cryptid creatures (i.e. Things That Are Awesome), despite having had it recommended to me on several occasions (Like by Mr. M. Ampersand, in the comments section of a post about Fanta’s latest Beasts! book).

This past week’s issue of the series, its eighteenth issue, seemed like a pretty good place to start since 1) Its cover featured what looked like a picture of Bigfoot dressed like Abraham Lincoln, 2) It said “A New Era Begins!” on the cover, and, of course, 3) I was emailed a PDF of the issue to peruse.

Obviously, starting out on the eighteenth issue is a less than ideal place to start a serially published, ongoing comics series, but I resisted the temptation to do any research about the book’s background, like looking for a Wikipedia page or something, so I could better assess it as a standalone issue.

Well, a new era may or may not be beginning, but it didn’t strike me as a particularly great jumping on point for the series. There was certainly a lot to like about the comic, but by the last page I was still finding my footing, and was still pretty uncertain about just who was who and what was what.

The book opens with one of those recap-type pages that all of Marvel’s books now has, explaining that Proof is the name of a sasquatch (Huh, Word does not acknowledge “sasquatch” as a real word) that met Lewis and Clark in 1805 and joined a “joint agency of the American and Canadian governments” in 1969 and that the time in between remains a mystery.

The story begins in London, 1859, where a lady is running around frightened of something and bumps into the chest of a rather large man, who actually looks like the Bigfoot on the cover (Aw, I guess he wasn’t dressed like Lincoln, he was just dressed like a mid-nineteenth century gentleman in a top hat, and sasquatch facial hair just sorta naturally resembles that of our greatest president).

From there we jump to “the present,” where a Bigfoot in a big white suit and a woman visit an old Norwegian man in a basement full of curiosities, and they collect what looks like the preserved remains of a female alma.

And then its back to the mid-nineteenth century London for the rest of the issue, where the hairy ape-woman named Julia performs in a circus as The Baboon Lady, singing (for her pleasure) and disrobing (for that of the rubes). Also in the circus are two other giants—the top hat rocking sasquatch from the title page and a less hairy guy of about the same size—who are called upon by a police detective to help him catch “the most notorious criminal in London,” Springheel Jack.

When I mentioned there being a lot to like about the comic? This is mostly what I was talking about. Springheeled Jack, let the record show, was awesome, which, if you’ve read about him before, you already know. If you haven’t, I’m just going to link to The Internet’s own Dave Campbell, who wrote a typically funny post about S.H.J. which also contains plenty of useful links.

Unlike Bigfoot or the Loch Ness monster, the sightings of Jack were so varied and so relatively few and localized that there isn’t really a consensus image of the figure that would make him or it immediately recognizable, nor is there a single popular theory (or handful of theories) to explain him/it. So when he shows up in comics, he always looks pretty different.

And the version of him that shows up in Proof #18? It looks incredible. It’s probably the coolest looking Springheeled Jack I’ve ever seen.

He’s got a big gold, horned, grinning, metallic-looking mask over his face, completely hiding his features, although little red dots glow in the shadow obscuring his eyes. He has a long shock of dark hair or a wig flowing behind the mask, which gives him the look of an anime-esque Japanese feudal demon. He’s dressed in period clothing—tight coat with tails, ascot-looking thing coming out of his popped collar, tight britches—and his legs are some sort of metal contraptions that look like brass robot satyr legs, explaining the jumping.

Apparently, he’s the thing that was chasing the girl in the opening pages, and there are several scenes of him running and jumping around, looking all badass. He lurks on the circus grounds, he evades the Bigfoot (Proof?) and the big dude and the police guy, and he goes to visit Julia.

If I pick up Proof #19, it will be to see more of Alex Grecian, Riley Rossmo and Dave Casey’s Springheeled Jack, and to see how all of this ties together.

While I’m still a bit lost on the who’s who and what’s what, I should note the characters are all well drawn and fairly well-designed (although I’m confused if the present and past Bigfoot are both Proof or not, and if that giant, hairless dude is also supposed to be a monster of some sort), and the writing is sophisticated enough to define the relationships between the characters in a subtle, naturalistic way.

I can’t say that I’m hooked—at $3.50, Proof, like a lot of Image Comics, seems like a comic better purchased in trade—but I’m definitely curious.

Related: Image has a preview of the first four pages here. I didn’t realize it until just now when I was looking for links to their sites, but Grecian and Rossmo’s previous work includes the AiT/Planet Lar book Seven Sons, which I liked a lot when I read it a while back; that I wholeheartedly recommend.
Posted by Caleb at 7:39 PM

The weird looking "oracle" at the circus is the Dover Demon, something I doubt anyone would be able to pick up on without reading earlier issues. I know you get a lot of trades from the library so maybe you'd be able to find a copy of the series' first one...

We got an advance preview over at Weekly Crisis too, but I wasn't the one to review it.

I liked this issue, but I can see how you would be confused by the past/present thing (and yes, it's the same sasquatch). In my opinion, it would have been more reader friendly if they had just set the whole issue in the past.

Fair review and appreciate your thoughts on the book. I am an avid reader of the book and there are some things that really were more fun for an existing reader than a new reader but I did think this issue was accessible for the new reader.

If you have any interest in learning more about the book there is a fan blog http://proofcomic.blogspot.com

Hope you give #19 a chance - the solicitation is on the above blog is you want to check that out.