Okay, I give up: Who's this guy supposed to be?

In this past week's issue of Trinity, the Scott McDaniel-penciled back-up feature opens with a splash panel of the JLoA and the JSoA all flying away from the United Nations building towards their respective bases.

Here's a close-up of the JSoA: 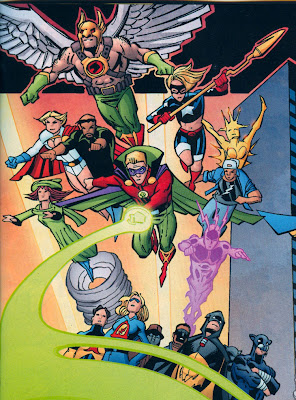 I've been thinking about it for, like, four days now, and I can't figure out who this guy is supposed to be: 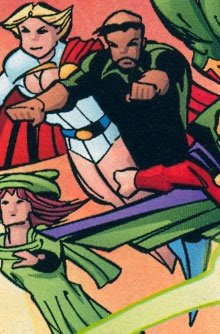 Is it Amazing Man III? Because he can't fly. But even if he was accidentally drawn flying, he's also wearing a super-different costume, and has hair, while AM III is bald. That adds up to a lot of mistakes on a single character.

Is it a white character mis-colored black? Because even then, I can't think of a white guy on the JSoA who wears anything like that who would be flying. Looking at the rest of the team, it looks like pretty much everyone who was on the JSoA by the beginning of that Gog storyline is present and accounted for. It can't be Citizen Steel or Starman or Mister America III without being even more mis-drawn than Amazing Man.

I am totally stumped.


UPDATE: Okay, the consensus seems to be that it's miscolored Starman, which makes a lot of sense. If Starman had his mask off, you would be able to see his beard, so it looks like they just made him a black dude instead of a white dude, messed up his hair, colored his gloves as skin, and then colored his costume and feet wrong. Hey, it's a weekly comic. It's not a big deal at all, since none of those characters really have much of anything to do with the story; the only story in the panel was that the Hawkman and his team were flying off. I just couldn't figure out who it was supposed to be. Now my mind is at peace.
Posted by Caleb at 12:47 PM

Starman without the mask on?

I think it's just Amazing Man with a bunch of mistakes. Atleast that's what I told myself when I came across it.

You think that stuff up top is hair? If so, what's up with the bald head placed on top of the hair? It's like a strange Friar haircut...

With the beard I have to go with Starman with a coloring mistake. Make the hands white, the face flesh colored... then add a bandanna around his head? I don't know, I vote for Starman.

That's Tupac. I can tell by the way his bandana is tied. Check out what I mean here.

I'm guessing Starman, but the colorist thought it was Amazing Man.

i'm also guessing Starman mis-colored as Amazing Man... the sleeves end where Thom's gloves would start and the "bandana" would be his mask rolled up - the mask would have to be rolled up, otherwise, we wouldn't be seeing Starman's beard.