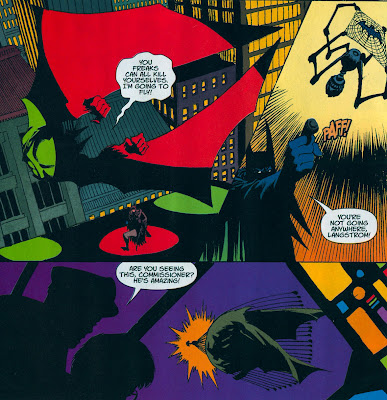 Batman has developed his own personal Man-Bat Catcher, which shoots out a missile that, when within range of Man-Bat, enters its second stage and fires a net around him.

But wait, wouldn't tossing a net over Man-Bat while he's in mid-air cause him to fall all the way to the ground, badly injuring and possibly killing him, and thus violating Batman's strict modal stance against taking another life?

Yes, it would. If Batman hadn't already thought of that, and included a little parachute, which will gently float the captured Man-Bat safely down to the ground: 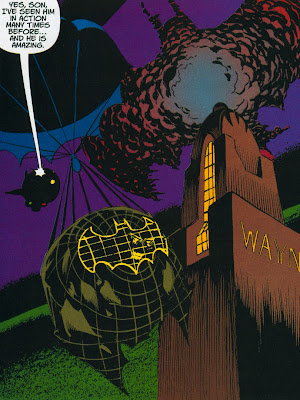 Note Batman's usual strong branding efforts on the net, too; it includes a big, bright, yellow Bat-symbol, so anyone who comes across a giant were-bat entangled in a net on the street will know who's responsible for putting it there.
Posted by Caleb at 9:43 PM

His branding skills are so amazing that he even gets the explosion smoke to form the Batsymbol! He really does love his own insignia, doesn't he?