A thought that occurred to me while watching ABC between 8 and 10 p.m. last night 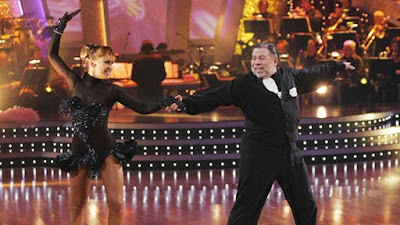 (Mentally erase Steve Wozniak from that image and replace him with, say, Peter David. Suddenly the show seems more exciting, doesn't it?)

No, we won't truly have made it until a comics creator makes it onto Dancing With The Stars.

And it would be good for Dancing too! As much as I dig the show, I can't help but think it would be infinitely better if it had one fewer reality TV show alum and a Stan Lee or Mark Millar or Joe Quesada or Grant Morrison or Jim Lee or Paul Pope or Lynda Barry or James Kochalka or Harvey Pekar or Kyle Baker or Evan Dorkin or Chynna Clugston or Geoff Johns or Erik Larsen or Rob Liefeld or Keith Giffen on it instead.

Hm. Then maybe I might actually have some sort of interest in watching. But so far...not so much.

Just as long as it's not John Cassaday. That guy doesn't need any more distractions from finishing the last issue of Planetary.

If I sound bitter, it's because I am.

My mental eraser stalled. How's this?

So many comic creators are grossly overweight. Do we really want to see them shaking it on TV?

Hey, John Cassaday is gorgeous! He'd be perfect. As long as he keeps drawing of course.

Jeffrey Brown for DWTS. That is all.

Next up, Peter David appears on American Idol and gets votefortheworst.com shut down.


I would personally want to see Neil Gaiman on a tv show. He's handsomer than Ellis, and Morrison tends to come across as a fruit loop in interviews.

I happen to know for a fact, having witnessed it on multiple occasions, that David Mack can cut a rug. That's what the kids call it nowadays, right? He'd be great on it, too, since he only actually does like 4 comics a year anymore.