Not really being interested in X-people, the current cross-book "Dark Reign" storyline or the current state of the Spider-books, there's not a whole lot here that fills me with excitement or dread, but I did have a couple of general observations.

1) What on earth ever happened to The Twelve? Was there an announcement regarding its cancellation or was the artist lost at sea or what?

2) It looks like Marvel is doing a better job letting folks know what's actually in their books now; I noticed a few books that marked whether or not there was reprint material in them, and how much of it was reprint vs. new material.

3) There were several mentions of "80s Decade Variants," all by artist "TBA." I'm not sure what to make of that. Maybe it will be cool?

As for specific titles, here are books that look exciting or upsetting to me... 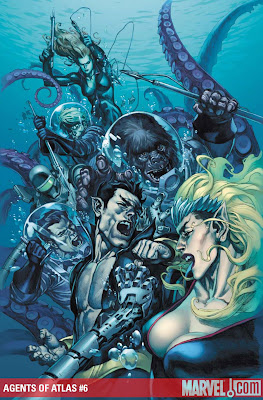 AGENTS OF ATLAS #6
Written by JEFF PARKER
Penciled by GABRIEL HARDMAN
Cover by LEINIL FRANCIS YU
Disturbing visions plucked from the malignant mind of Norman Osborn lead the intrepid Agents to the darkest depths of the Atlantic Ocean, where Namora must have words with her infamous cousin - The Sub-Mariner! What happens next shocks her team, who must prepare to say goodbye to their aquatic avenger!

While I've liked the title so far, one thing it's really been missing is more Namor-punching-things. Of course, I think that's true of every Marvel comic book. Well it looks like that deficiency is finally being addressed this issue.

Nice Yu cover, by the way. What are Namor and Namora doing, do you think? Mouthing things like "Imperius Rex!" at one another? Singing? Laughing heartily? I don't know. Has Yu or Marvel announced where he's landing after that Ultimate series he's drawing wraps up? 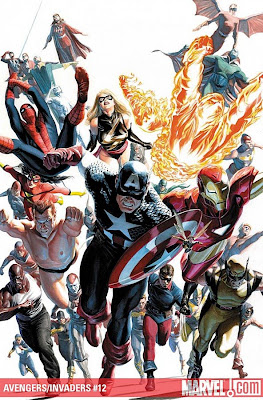 I'll miss you so much after this twelfth and final issue, Avengers/Invaders!

This last issue has a variant cover by former JSoA artist Dale Eaglesham, and the interiors are, of course, still by former JSA artist Steve Sadowski. And the other cover is by JSoA cover artist Alex Ross, who co-wrote this and, incidentally, also co-wrote JSoA.


CAPTAIN AMERICA #600
Written by ED BRUBAKER with MARK WAID, ROGER STERN & OTHERS
Pencils by BUTCH GUICE, LUKE ROSS, DALE EAGLESHAM & OTHERS
Cover by STEVE EPTING
50/50 Cover by ALEX ROSS
Where were you when Captain America died? It's the anniversary of the day Steve Rogers was killed, a day of reflection and mourning in the Marvel U...a time to look back on the things Steve did and what he stood for... or is this issue actually the beginning of the most wicked plot twist since issue 25? Yeah, actually it's both. Plus, contributions from Cap creators past and present, including a very special essay by Joe Simon, a classic story from Cap’s Golden Age, a full gallery of 600 Cap covers, and more anniversary shenanigans than you can shake a shield at!
104 PGS./New and Reprints/Rated T+ ...$4.99

Wait, Captain America died in issue #25? And they're already on #600? Jeez, it seems like it was just a couple of years ago that Cap died...I guess I'm way behind on this series at this point... 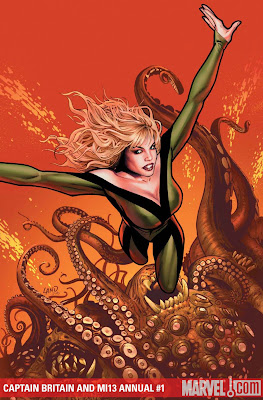 CAPTAIN BRITAIN AND MI13 ANNUAL #1
Written by PAUL CORNELL
Penciled by MICHAEL COLLINS
Cover by GREG LAND
Meggan is Captain Britain's wife, an X-Man in Hell. And she's going to fight her way home. Over years, bargains, battles, with only her love to guide her. Can she get back to Earth in time to help her husband turn back Dracula and his evil invasion? And is that a metal gauntlet offering a hand? Don't miss this key part of "Vampire State"! Plus: MI13 delves into the secrets behind British Magic.
48 PGS./Rated T+ ...$3.99

Now what did I tell you about putting Greg Land covers on comics I want to read, Marvel? It's like you're trying to talk me out of buying the annual that goes with a series I really, really like...

Land also provides a super-shitty cover for Marvel Zombies 4. Is this the worst drawing of the macabre Man-Thing ever? It's definitely a contender. 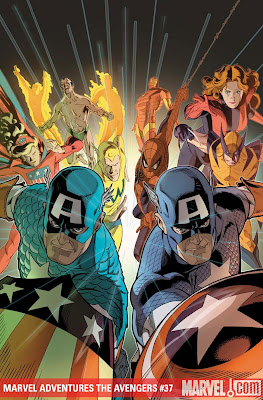 MARVEL ADVENTURES THE AVENGERS #37
Written by PAUL TOBIN
Penciled by DAVID BALDEON
Cover by DAVID WILLIAMS
DOLL WINNER'S SQUAD: He's back, and now the Puppet Master's reach extends into the past, where he's controlling the All Winner's Squad into reshaping the "future world" of today into his own very personal utopia! But when Miss America, Golden Girl and the Blonde Phantom arrive from the 1940's to team up with today's Captain America and the rest of Avengers, it's a battle royale to decide the past, present and future fate of the world!
32 PGS./All Ages ...$2.99


Okay, this will help me miss Avengers/Invaders a little less. 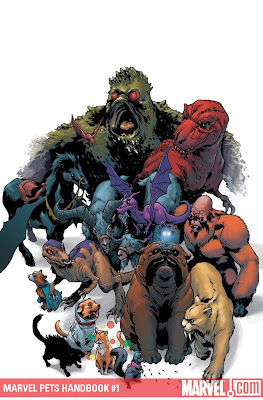 Honestly? This is the Marvel comic I'm most looking forward to in June. I can't wait for this.

MISS AMERICA COMICS #1 70TH ANNIVERSARY SPECIAL
Written by JEN VAN METER
Penciled by ANDY MACDONALD
Cover by DALE EAGLESHAM
Variant Cover by MARCOS MARTIN
A brand new adventure of one of comics’ original super-heroines! Plus an extra-special classic reprint of one of her original 1940’s adventures.
Jen van Meter (Black Lightning) and Andy MacDonald (PUNISHER: WAR JOURNAL) take you back to a time when the fate of the United States rested not only in thousands of men fighting for freedom overseas, but also in the hands of the women back home building the equipment that would keep the country running and winning!
So get ready Axis Annie, Vichy Vixen, and...Madame Mauzer! Her name might be Miss America...but she sure ain’t gonna miss a chance to sock evil in the face!
(This solicit brought to you by a very tipsy editor!)

Even the creators are completely classified, huh? So, you guys don't really know what you're publishing in June yet, do you? Admit it!


SECRET WARRIORS #5
Written by JONATHAN HICKMAN
Penciled by STEFANO CASELLI
Cover by JIM CHEUNG
The smashing first arc of Marvel's best new series comes to a climax as the battle between H.A.M.M.E.R., HYDRA, rogue S.H.I.E.L.D. agents, and the Howling Commandos begins!
This is the first shot in a war that will result in the establishment of a new global power structure...and who's caught in the middle? You guessed it: Nick Fury and his team of Caterpillars.

If Nick Fury's team of heroes are called "Catepillars"-with-a-capital-C, why didn't they just call this book Nick Fury's Catepillars or Catepillar Warriors? I would have been more likely to buy it.

Looks like Brian Michael Bendis has left Hickman on his own here...


If anyone at Marvel's keeping score, these are the comics I would have been planning on buying in June, if they were $2.99 instead of $3.99:


Some of those I'll probably catch up on in trade paperback—Wizard of Oz,Marvel Zombies 4, for example, and that Beta Ray Bill book—but that $1 increase just kills dead on checking out comics that I might like or following certain creators and so on. (UPDATE: I had originally had listed Mighty Avengers as a book I'd read for $2.99 but not $3.99. It actually is a $2.99 book, as was pointed out in the comments. I am just dumb).
Posted by Caleb at 4:27 PM

>Honestly? This is the Marvel comic I'm most looking forward to in June. I can't wait for this.

Ah, my work here is done.

Why don't you have blog entries for Dark Horse & Image Previews?

"Is this the worst drawing of the macabre Man-Thing ever?"

No. It's neither particularly good nor bad, really. It's just kind of there.

To me this looks like Greg Land traced over an Adam Hughes.
It never ends.

So, is this going to be the end of the "Is Lockjaw a dog?" controversy? I'm looking forward to finding out.

That's Meggan? I honestly had no idea when I first looked at it. Seriously, Meggan is supposed to look like an Alan Davis drawing, not a generic Land blonde.

The Twelve is on permanent hiatus. It was mentioned in one of the Cup O' Joe blogs, I think.

You know, I bet Devil Dinosaur is incredibly mad about being listed as a pet.

I mean, being treated like an animal last time led him to overly elaborate vengeance on all mankind, and it was only Nextwave that saved the human race from extinction.

And with Aaron Stack busy with the zombie thing, I think we're pretty well hosed.

Ah, my work here is done.

Why don't you have blog entries for Dark Horse & Image Previews?

I've thought about it before, and even started posts once or twice, but I don't really read any Image titles or Dark Horse titles as single issues regularly any more and, additionally, because they tend to be so tied to their particular creators, there's less to complain about.


The Twelve is on permanent hiatus.

Ah, thanks. I was afraid of something like that.


You know, I bet Devil Dinosaur is incredibly mad about being listed as a pet.

I thought Moonboy was his pet, not the other way around.

Why is Swamp Thing a Marvel Pet?

I think it's a damned shame Bob, Agent of HYDRA wasn't included as a pet.

If you're not getting it right now then you're seriously missing out, especially with this week's issue. EVen if you haven't bought the first two, go out and buy #23 right now, I promise you won't be disappointed!

I was planning on maybe checking out the first trade, as I like a lot of the characters, but I was so burned out on Avengers after SI that I've been avoiding them for the most part.

Yeah, it was one of those wonky first issue oversized deals. Trust me, Slott's run is a fresh breath of air compared to the crap Bendis has put us through. After the last issue I'd definitely say that this series is giving Incredible Hercules a run for its money as my current favorite book.