So that's why there was a three-year delay between issues #2 and #3 of that Wolverine vs. Hulk comic... 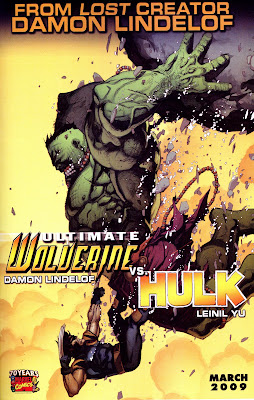 According to this house ad that ran in this week's Marvel comics, creator Damon Lindelof was apparently lost during that time. At sea? In the desert? Perhaps struck with amnesia and wandering the highways of middle America? It doesn't specify, but now I feel bad for ever making fun of him for not being able to write the script for a silly Marvel superhero fight comic within the space of a few years. I had no idea he was--

Labels: phoning it in, yu

Heh. I have to admit that three years ago, I was breathlessly awaiting this issue. Now, I do not care in the slightest.

I gotta admit to being more than a little disheartened that this series couldn't be finished before the Ultimate Universe itself was "finished" (Ultimatum). What the heck? "Lost" indeed. That being said, I flipped through this issue at my LCS and was impressed...and then put it back on the shelf. Maybe I'll buy the trade, but I'm sure not gonna invest in the individual issues. Lenil's work looked a lot nicer here too, than it did in Secret Invasion