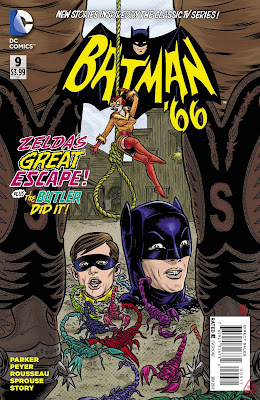 Batman '66 #9 (DC Comics) The Jeff Parker-written cover story pits Batman and Robin against Zelda the Great, the escape artist who puts them in death traps and watches them escape, in order to add the traps and escapes to her repetoire. That story is drawn by Craig Rousseau, one the several artists to contribute to this series so far whose work I would have had a hard time imagining being used to adapt the television show into a comic book...until I actually saw how well it turned out (Tony Avina's colors go a long way toward giving Rosseau's art a sort of pale, light, almost washed-out look).

The back-up story by Tom Peyer and Chris Sprouse was actually my favorite though; Alfred's identical cousin Egbert—a devious, English slang-spouting criminal—konks Alf on the head and attempts to take his place in order to rob Bruce Wayne. It ends as so few Batman comics ever do—with Alfred throwing a punch.


Classic Popeye #20 (IDW) The lead story in this issue features maybe the most wildly offensive portrayal of Native Americans I can remember seeing in a comic book, as Popeye takes a vacation in the desert and is taken captive by a tribe of cannibal Indians that speak in strings of syllables like "Ugh-Glub-Slub-Yub Gub Nub."

Our white man hero is saved from the stew pot (sorta; Popeye's invincibility means he can't be cooked in boiling water or set aflame) when the chief's beautiful daughter wants to marry him. He's going along with it, until Olive Oyl finds him through the power of her jealousy.

"How do you expect to find him in this wilderness?" Wimpy asks Olive when she drives them out to the desert in search of Popeye. "That's easy-- my jealousy will be my compass! I'll show you! When I face this way, I feel nothing! But when I face this way, I get mad!! So I knowhe's in this direction! I'll follow my anger to him!"

Dames. Are they horrible or what? Why, they're almost as bad as those uncivilized, savage Indians, who are always trying to eat white people...

Hawkeye #17 (Marvel Entertainment) With this issue, I get the sense that writer Matt Fraction is trying to push the boundaries with this book, which he has already split into two unrrelated narratives featuring two different characters named Hawkeye, and done a done-in-one issue told from the point-of-view of a dog. Here, I think he's found his limit, having pushed too far.

Aside from the the one page of David Aja art that opens the book and the one page that closes it, the entire contents of this issue consist of a cartoon special Clint Barton fell asleep while watching many, many issues ago (last year's Hawkeye #6, according to the recap page). I'm assuming the story is influenced by Clint's dreaming as well, as after a few pages the content of the cartoon start to reflect the events of the ongoing Hawkeye story, only with dog versions of the characters all appearing, their names seemingly chosen at random.

There are only really two jokes in the story, and if they're funny at all, they don't stay funny for the length of 18 pages. It does allow regular Hawkeye letterer Chris Eliopoulos to draw 18 pages of Hawkeye, in the Calvin and Hobbes-inspired style of his Franklin Richards comics, and it's nice to see his art here. Just as it's nice to see Fraction, Hawkeye and Marvel so willing to try to do new and different things.

Even when they don't really work.


SpongeBob Comics #30 (United Plankton Pictures) This is a remarkably straight issue of the series, which I can't believe is already up to 30 issues. The first two stories are so on-model and so on-par with the cartoon show that they seem a little pedestrian compared to some of the wilder takes this book has often hosted.

David DeGrand's story, and a two-page gag strip drawn by Mark Martin are a little more like it in terms of idiosyncratic weirdness and personalized style; there's also another page of James Kochalka, a Travis Nichols "fill-in comic" which asks young readers to draw some characters into the final panel, and some pretty neat page-flip animation drawn by Bob Flynn.

The Superior Foes of Spider-Man #9-#10 (Marvel) Sometimes it seems like Marvel needs a guidance counselor to sit the publisher down and talk to it; ask it how it's feeling, if anything's bothering it, if it realizes it's been acting in a way that is confusing and upsetting some of its friends and family.

I know they've been double-shipping and, occasionally, crazy-shipping certain titles for the last few years, which has the positive effect, for the publisher, of allowing them to sell more comics more often and, for the reader, giving them more of what they want more often. The downside is it necessitates a lot of fill-in art, one side-effect of which has been few titles have been able to maintain a unique visual identity, and those that have haven't allowed a single artist to take ownership of a title or run in the same way that the writers of those books have been able to.

The comics they usually double-, triple- or crazy-ship are generally the very popular ones, though, so, for the life of me, I can't figure out why the shipped issues of Superior Foes on two consecutive Wednesdays.

The book has been in "troubled, likely to be canceled at any minute" status almost immediately since it launched, despite the fact that it is a really smart, really funny, really great-looking book. I'm not in sales or comics, but I don't see what Marvel has to benefit by shipping issues literally on top of one another (I would have missed one if it weren't in my pull-list, and I'm about as engaged in the shipping of new comics as I can be without actually owning a shop), and there doesn't seem to be a creative or story reason for shipping two issues this month (let alone this fortnight). The second issue is a fill-in one, by writer James Asmus (who does a nice job of aping the style and tone of regular writer Nick Spencer's scripts) and a handful of different artists.

Anyway, Foes #9 (look for bootleg Snoopy on the cover!) finds Boomerang fighting Bullseye (or is he?!) and pitting The Owl against The Chameleon to save his own skin; meanwhile another foe of Spider-Man entering the picture. Maybe he'll eventually join the gang, and the Sinister Six will have six members for the first time since this book launched...? That one is by the regular creative team of Spencer and artist Steve Lieber, with Rich Ellis earning an "additional art" credit.

Foes #10 kicks off with what is essentially a three-page recap page, two-thirds of which is illustrated by Gerardo Sandoval and Andres Mossa. From there, guest writer Asmus does a sort of mini-Canterbury Tales featuring The Beetle, Speed Demon and Overdrive, as they sit around a bar, each telling stories of times they triumphed over superheroes. Nuno Plati, Siya Oum and Pepe Larraz are among the artist drawing these pages, and Hercules and Daredevil are rather prominently featured, although there are cameos by still more characters. 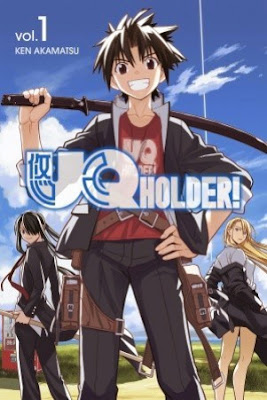 UQ Holder! Vol. 1 (Kodansha Comics) I haven't read any of this beyond what's written on the back cover yet, but am including it here simply because I purchased it today (I'll likely review it elsewhere in the near future). This is apparently a new series by Ken Akamatsu, creator of Love Hina, which I kind of love, and Negima!, which I started and got pretty lost on, as it is a very, very long series, with a confusingly, gigantic cast and sort of diffuse premise. I'm looking forward to sitting down with this soon.
Posted by Caleb at 8:31 PM

Superior Foes is my number one favourite book on the stands, and I've gotta say this week's issue wasn't great. It wasn't bad by any means, but it just felt so much like Asmus was trying his darndest to be Spencer and not quite getting there.

What I thought was most interesting was Carmenero [I'm assuming he did the art in between solo stories] depicting Overdrive as Black. He's always been decidedly dark in Lieber's art, but never with any features that would lead me to assume he was that particular race.

Not that I'm complaining. If this is the case [which it very much appears to be] than that makes every one of the titles on my pull list feature minority characters as main characters [I currently read Ms. Marvel, and All-New Ghost Rider and Iron Patriot both come out next week.

Apparently UQ Holder takes place on the Mars of the future from the end of Negima. I lost track of Negima during their endless stay in the Magic Kingdom/Soul Society/Namek.