Review: Wolverine and The X-Men Vol. 4 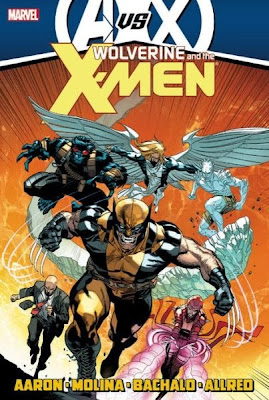 Wow, I guess the 12-issue Avengers Vs. X-Men series must have lasted a lot longer than I expected, given that the this five-issue collection is the second straight collection of this title tying directly into the line-wide crossover story.

As with Vol. 3, the Avengers Vs. X-Men series plot more-or-less takes over the book, with the issues collected herein consisting mostly of done-in-one stories that take place in and around plot beats from AvX, with writer Jason Aaron striving valiantly to move his own sub-plots forward (and sometimes succeeding quite admirably). There are three art teams involved in these issues, with pencil artist Jorge Molina and inker Norman Lee handling three issues, pencil artist Chris Bachalo and a trio of inkers handling a single issue, and Michael Allred coming aboard for a single issue in order to draw the collection's highlight, a story featuring his co-creation Doop.

In the first issue, one of the Molina issue, the Phoenix-possessed Colossus arrives at the Jean Grey School in order to ask headmistress Kitty Pryde, who has been mostly sitting out the conflict in order to keep the school going and the kids safe, out on a date. She complies, in order to try and talk her old friend (and old boyfriend) out of the mad god/cosmic supervillain territory he and the rest of the "Phoenix Five" are quickly edging into (At this point in the main storyline, they've started imprisoning defeated Avengers in an infernal prison camp, and many of the other X-Men are starting to have serious doubts about siding with Cyclops over the Avengers, here dramatized by series regular Iceman walking out on on the crazy mutants). I like the way Molina draws Iceman...he's still a spiky, but not as spikey, and he's not wearing those cargo shorts.

The date doesn't go well, and Colossus is ready to destroy Kitty's school, when its few feeble defenders—Kitty, Deathlok, Lockheed, Husk, Toad, Doop and Krakoa—convince Colossus to leave them alone for now via their apparently willingness to die for the school. Colossus is sad.

Molina draws the second issue as well, a pause-before-the-storm one in which the remaining teens from Utopia enroll at the school, Avengers Iron Man and Iron Fist consult with Beast and Broo about how to deal with the Phoenix Force, Charles Xavier shows up to look over the grounds and briefly deal with Quentin Quire, and then Xavier, Angel, Beast, Wolverine, Rachel Grey and Iceman go off for their final battle with the be-Phoneixed Cyclops and company.

Bachalo then shows up to draw a Hellfire Kids issue, which basically shows what they've been up to now that mutants are ruling their world with their nearly omnipotent powers. While their leader Kade Kilgore tells the readers the story of how he took over the Hellfire Club and went into the business of building and selling Sentinels, Cyclops and company show up, have some words with Kilgore and throw the kids into an adult prison, where they wait out the current status quo, and actually fare much better than one might expect a handful of little kids to.

That's followed by the Allred issue. Entitled "Wolverine's Secret Weapon," it's the story of how Wolverine convinced Doop to join the teaching staff at the school—a three-page sequence in which Doop has Wolverine to try and keep up with him. When Wolvie complies with all of his requests, no matter how difficult and/or embarassing, Doop takes on the position of the Jean Grey shcool's fixer. Doop, it turns out, is the best there is and what he does, and what he doesn't not only isn't very pretty, it's incredibly weird.

So Doop violently deals with hate groups and monsters, seduces local city council officials—male and female—to change their votes, has scary-rough sex with Warbird, out-metals Satan in a "Devil to Georgia"-like guitar duel, competes on the Avengers roller derby team (on his hands, if you're wondering where he puts his skates), baseball bats the laptops of bloggers bad mouthing the school, time-travelling to safeguard Charles Xavier's ancestors, and so on.

It's the kind of craziness Aaron excels at—"We're trapped in a cave in Dimension ZZZ, surrounded by hordes of bloodthirsty robo-barbarians, with nothing between us but a broken sword, a rubber chicken with nails in it, and a gun that shoots bees"—without even the porous filter of a semi-serious X-Men comic tamping down on any of it. Allred is, of course, game for anything, and this issue, in which every panel or four switches to a different scene of madness, gives hima whole bunch of crazy shit to draw...and a pretty big chunk of the Marvel Universe, actually. In addition to the Wolverine and The X-Men cast, he also gets to draw such unexpected characters as Howard The Duck, Tigra, She-Hulk, Gambit, Man-Thing, Deadpool, Sabretooth and more.

It's pretty much the best thing ever. (And a welcome break from the increasingly serious events of Avengers Vs. X-Men.)

The final book returns to the AVX plot, and to Molina and Lee and artists. Aaron jumps back and forth between the final battle between the Cyclops and Pretty Much Everyone Else, the one that ultimately ends with (spoiler!) Cyclops killing Xavier and the Phoenix Force being diffused to restart the mutant race, just as Cyclops had hoped it would, and between the events at the school. These include Husk leaving the teaching staff, Idie acting strangely, and Broo trying to get to the bottom of Idie's strange behavior, which exposes a new and weird plot by those Hellfire kids. In a particularly affecting scene, the Stepford Cuckoos, monitoring the battle via Cerebra, see so many new lights appearing, as the Phoenix Force starts making new mutants again, that no one notices that one light goes out.

As with the previous collection of the series, I'm curious how this reads to someone not following Avengers Vs. X-Men, as so much of it is written as direct reactions (The Doop issue aside, which is the only issue that doesn't refer to AVX at all). Aaron does a pretty good job of writing a long string of tie-ins without completely surrendering his own plotting in service to what it's tie-ing in to, however. Perhaps this has something to do with the fact that Aaron co-plotted AVX and wrote portions of it, and thus knew it inside and outside well enough to intertwine it with the events of his own book.
Posted by Caleb at 6:41 PM