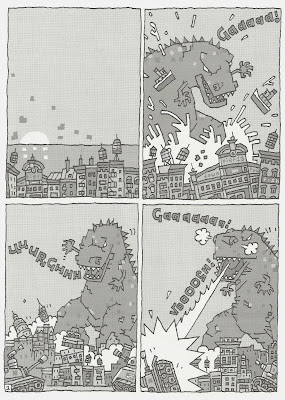 I was so impressed by artist Simon Gane's work on the IDW ongoing Godzilla series with writer Duane Swierczynski, which has since wrapped up and been collected into three volumes, I started Internetting around to see if Gane had ever done any other comics featuring giant monsters, and was surprised and delighted to find All Flee!, a monster-themed gag comic that Gane drew and Gavin Burrows wrote. The one issue was published by Top Shelf about a decade ago, is still available through the publisher (Unless I bought the last one; Top Shelf was the only place I could find selling copies online, but my search wasn't too terribly extensive; maybe ask your local retailer first...?).

It takes its title from something two Godzilla-like professors at a finishing school for monsters chuckle about; apparently that's what people in Tokyo say before you trample on them. 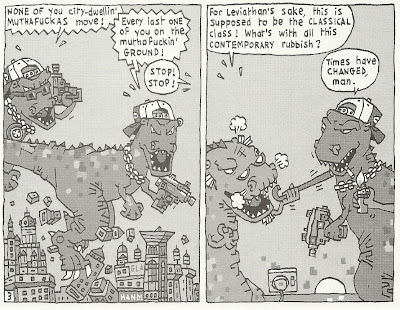 There are three strips in the book, the first two of which are on the subject of giant monsters. The first is entitled "A Finishing School For Monsters," and stars an older, Godzilla-like monster with white sideburns, a little white beard and a cane, decrying the sad state of his students ("You can KEEP your digitally remastered remakes and...and you Pokemon cards and...and backwards hats...") before quitting and having a pretty miserable day.

His students consists of those pictured above, a pair of gorillas with robots parts on 'em, a giant spider and so on; his walk home to Monster Island takes him through New York, where "Kenny" (looks like King Kong to me) is dangling from the Empire State Building, fighting biplane, and a horned cyclops like that from The 7th Voyage of Sinbad is selling packs of humans out from a vendor's pushcart.

Though Gane's art is obviously much more cartoony, both in his monsters and in his humans, its still recognizably his, certain features simply exaggerated to a bigger size and higher level of blockiness. He still excels at drawing cute girls, and packing the panels with detail, so that he offers particularly interesting backgrounds and cityscapes.

In the second story, "All Flee!", the same crotchety monster teacher meets a new faculty member—a female monster teaching Contemporary Trampling—but when he sees how fetching she looks in her smart suit, he's head over tail in love with her. They visit Europe together, destroying things, but their affair ends when she takes a job in Hollywood as a "a MAYHEM ADVISOR...for the latest REMAKE."

The third story is completely monster-free. "Cruisin' With The Dorks" is set in a pub, and features a dorky character telling three other characters about the band he was in, and the dork-power movement it inspired. It's a very British strip, and there's really only one joke repeated in various ways throughout, but it's funny enough—perhaps not as universal as jokes about Godzilla and company though. There's a nice, pointed panel making fun of modern comic books, and it's a treat to see Gane's big, chunky cartoonier style applied purely to human characters and human scaled settings after the previous stories of a giant monster society built atop a tiny human one.

Rounding out the book are a couple of ads and a couple of fake ads; the latter features a monster getting sand kicked in his face by a human beach bully before going in for some Charles Atlas-style confidence building ("Couldn't you just trample those humans?") and a Hostess inspired one for Human Fruit Pies, in which the mayor distracts a giant monster from eating humans by giving him giant fruit pies...filled with humans.

The above link includes a preview featuring six pages from the first story, if you'd like to see some more of Gane's art from the book, including some of his other monsters.
Posted by Caleb at 7:18 PM