Through a very particular confluence of events—publisher release dates, space available in publications, etc—this week I actually have an article or post of some kind in all four of the places that articles or posts of some kind from me can possibly run. I don't actually remember the last time that's happened. 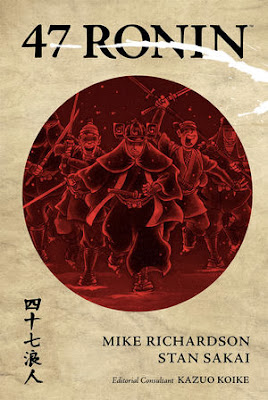 So, for a review of 47 Ronin, the upcoming hardcover collection of the Dark Horse miniseries adapting the classic Japanese national legend by writer Mike Richardson and artist Stan Sakai, please see Good Comics For Kids. 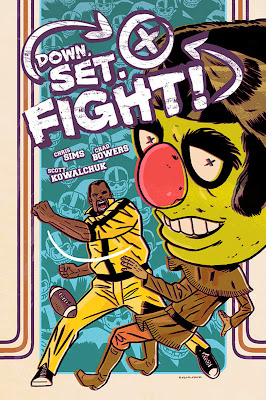 For a short review of Down. Set. Fight!, an original graphic novel from Oni Press with a hard-to-describe-in-a-sentence-or-two premise by the writing team of Chad Bowers and Chris Sims (whoever that is) and artist Scott Kowalchuk, please see Las Vegas Weekly.

I was a little leery going into that book because it has a little to do with sports, of which I am completely ignorant, and it was written by fellow comics blogger and writer-about-comics-on-the-Internet Chris Sims, who I didn't want to criticize, should it have turned out to be a lame comic. I had nothing to worry about, though, as it was pretty awesome, like some long-lost 1980s action movie about mascot-fighting. Kowalchuk's art is fantastic, and grounds what could very easily been a goofy comic in so much realism the the joke is semi-deadpan in delivery. I was really somewhat in awe of all the various mascots for fictionalized sports teams that are created for the story—they must number in the dozens by the end of the book—and as I have no idea how Sims finds the time to write so much about comics for the Internet while also having time to co-write comics like this...especially since I know from twitter that dude spends a lot of time playing video games and watching professional wrestling. 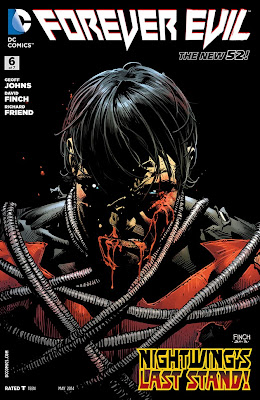 For the latest—and second-to-last!—installment of "Assessor Evil," my spoiler-filled close-reading of Forever Evil, please visit ComicsAlliance.

This issue finally reveals who the person in the hood is—a revelation which will make one wonder why the Syndicate decided to secure him in that fashion, instead of doing something a little more evil, like, I don't know, cutting out his tongue or fusing his lips together with a heat-vision (Also, why is Ultraman so scared of him? Ultraman totally took out a guy with a similar power-set in like four panels a few issues ago).

The book does not reveal the final fate of Nightwing, however, as the solicitation said it would, nor do we see his last stand, as the cover promises.

If you haven't liked the first five issues, you probably won't like this issue either, as all of the problems from the pervious issues are present here. (For another take on the issue, and the series, check out Tom Spurgeon's review. In addition to being a good writer and really nailing down various aspects of the series in a very short number of paragraphs, Spurgeon's piece is a refreshing one because the view he brings to the material is from the outside looking in at the swamp, rather than being neck deep in the muck of this stuff). 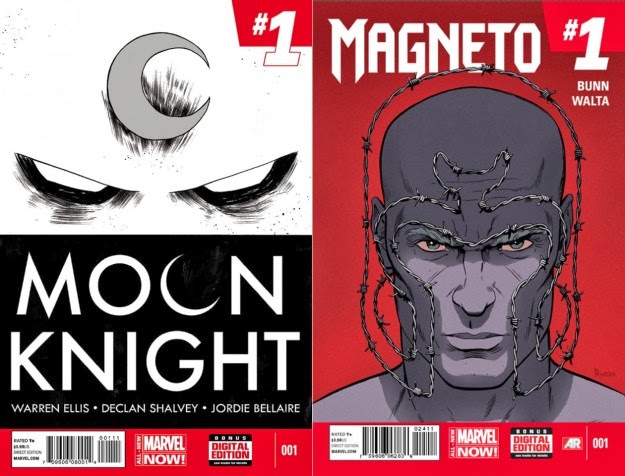 And then, finally, for reviews of the first issues of two new Marvel series featuring characters whose names begins with the letter and M and who both have snazzy new costumes, please visit Robot 6, where you'll find my reviews of Moon Knight #1 and Magneto #1. They're both pretty good, although Moon Knight is the better of the two, and seems poised to be the bigger hit and receive the critical darling status, perhaps in large part because Warren Ellis and Declan Shalvey are given a particularly hard problem to solve: Making Moon Knight work (I know from past posts here that a few of you are big Moon Knight fans, so I'm eager to hear what you thought of this take). I've since read a few other people's reviews of Moon Knight #1, and I think Andrew Wheeler's is probably the best of the bunch—he says a lot without using a lot of words, something I'm still not so hot at doing myself.

And that's all I got tonight, but that should be more than enough to tide you over until tomorrow night.
Posted by Caleb at 7:39 PM

Your article on "Forever Evil" was fabulous, Caleb. And right on the money.

Man, this thing has been dragging.

As a hard core Moon Knight fan, the latest #1 was fantastic. I'm curious to see how much Ellis does with the upending of the long-term status quo, but as far as the way he does things and Shalvey's art, it's excellent. Like you, I loathe Marvel's policy of charging 4 bucks for thin issues, but next issue will test my resolve!

I can never understand how a story involving the Crime Syndicate could drag. They're just like the most powerful heroes on Earth, only with fewer weaknesses and no scruples. Shouldn't everyone get killed in like a day?