DC Universe Vs. Masters of The Universe #5: Just one more issue, and then we can forget this ever happened.

As you'll recall if you're reading the series, or just reading my series of blog posts about the series, one-time court jester and created-for-the-dumb-cartoon-series comic relief character Orko, tired of being laughed at, became an all-powerful monster wizard guy, so powerful that Eternian Big Bad Skeletor now works for him.

He sent Skeletor to the DC Universe, specifically, Earth-New 52, where Skeletor enlisted teh aid of Black Alice, who has yet to use any magical powers of her own, or do much aside from occasionally sass Skeletor. They set up a bunch of magical "siphons," their intent being to drain this world of all its magical energy, destroying it in the process.

To keep those pesky superheroes in the Justice League out of the way, Skeletor had them all possessed (except Batman, who could not be possessed, because he's Batman) and sent them after He-Man, He-Man's mom, Teela and Evil-Lyn, who have journeyed to the DCU to stop Skeletor. At one point, He-Man impaled Superman on his magic sword, causing the latter to disappear and, because everyone in this book is an idiot, they assumed that meant He-Man murdered Superman.

The remaining Justice Leaguers, plus some of the guys from Justice League of America, the team in a book that DC launched exclusively to tie-in to "Trinity War" and Forever Evil and are will therefore soon cancel in a few months, go after all the good guy Eternians, which now include Man-At-Arms, Stratos, Roboto and Battle Cat, who have arrived looking for He-Man and friends.

And, that's pretty much where plotter Keith Giffen, scripter Tony Bedard, artist Pop Mhan and the pair of colorists splitting up random chunks of the book to work on—Veronica Gandini and Tony Avina—left off.

So once more into the breach, dear friends... 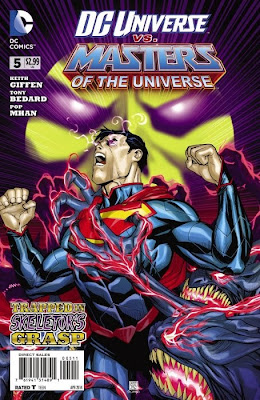 This is the first cover of the series not drawn be Ed Benes, an artist who I think I've made pretty clear in the past that I am not a fan of. This one is drawn by Bernard Chang, who is a pretty good artist, but it's hard to tell based on this terrible cover. Maybe this project is just cursed?

Just as this storyline has completely squandered the scores and scores of characters and settings that combining not one, but two fictional shared-setting universes have to offer, this cover ignores the 20 or so characters involved to present just two: Superman and, well, you might not be able to tell, but his name on the cover should serve as a pretty good clue that the abstract, vaguely skull-like shape in the background is Skeletor.

Superman is being beset by monstrous versions of Trollans, the native inhabitants of Trolla, Orko's homeworld in yet another dimension. The colorist, whom I think is Chang himself as no one else is credited, saw fit to make their blue skin and the red lightning auras about them almost the exact same shade as the red and blue of Superman's costume, so it all blends together into one big, ugly mess...with a little neon yellow trying to peek around the text and figures in the background.

"Trapped in Skeletor's Grasp," the cover says, despite the fact that, as we saw last issue, Superman is actually on Trolla now, trapped in Orko's grasp.

He-Man, his mom, Teela and Evil-Lynn arrive at the bottom of a rocky hill dotted with bare trees, the top of which is occupied by a shack that the caption tells us is The House of Secrets, which is where Skeletor has been holed up for much of the last four issues.

Inside, Skeletor is pretty happy about how well the magic power siphons are working—for evidence, we see that it has made Black Alice's legs and one of her arms very, very skinny. Black Alice is kinda sorta magic, I think—at the very least, she has a super-power which allows her to temporarily steal and use the magic powers of magic-powered DC characters—although I don't think that's been mentioned at all in this series yet.

Orko appears as a wall of fire with angry eyes to tell Skeletor about He-Man and mom are closing in, and, rather than leaving it to Skeletor to handle, Orko casts a spell that is variation of the one Skeletor used "to enslave the so-called 'Justice League'...Of course, my version is much bigger."

To emphasize how much bigger, we see the planet earth in long shot, surrounded by a red aura, while big, bolts of red lightning emanate from somewhere in North America, streaking all over the globe.

Meanwhile, in Gotham City, Man-At-Arms and his posse are staring down Batman and his posse, having apparently agreed to come to team-up since we've seen them last. "Then it is decided, Man-Of-Bats, we join forces against Skeletor."

Batman politely declines to mention that Man-Of-Bats is a different guy in a bat costume.

Suddenly, Constantine shouts "INCOMING! and FWOOSHes a spell to protect them from "some bad mojo" that "felt like mind-control, but on a massive" scale.

A message "squarks" in Batman's cowl: "To all who heed the master's call: Proceed to the encolsed coordinates. The Master's enemies must die!."

"That's the Justice League's global emergency frequency," Batman says, "There's o telling how many heroes might be receiving this." Really, notorious control freak Batman who builds secret backdoors into all Justice League technology and operating systems? No way of telling how many heroes are on the global emergency frequency? 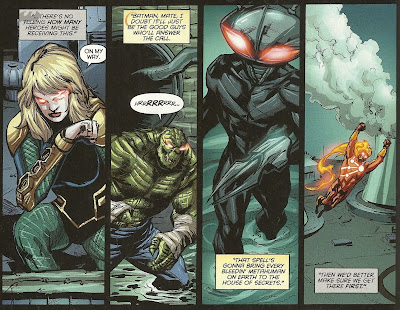 Page seven is broken into an eight-panel grid, each showing a different meta-human, none of whom I think would be on that emergency frequency, but, as Constantine says, that spell will likely bring "every bleedin' metahuman" to the House of Secrets. Those shown here, each with glowing red eyes indicating they are being mind-controlled, are Black Canary, Killer Croc, Black Manta, Firestorm, Cheetha, OMAC, Blue Beetle and Orion.

He-Man and Evil-Lyn storm the front gate of the House, and while Evil-Lyn attempts to betray He-Man, Skeletor stops her, and immediately launches into a completely un-provoked three-page expository story, recounting some of the events from that terrible six-issue He-Man and the Masters of The Universe mini-series DC published a while back.

It goes like this. A long time ago Hordak killed his dad, Hordak Prime, and took his skull, which became a super-powerful, super-evil artifact. Skeletor used it to take over Eternia in the previously mentioned shitty miniseries, and Orko had attempted to stop him by destroying the skull, but, because Orko sucks and his spells always backfire, he instead absorbed all the evil power in the skull. "All his life Orko wanted to be a great wizard," Skeletor says, "Now he is a mad god."

Apparently a very distracted mad god, as he was just monitoring the situation in the House of Secrets, but now doesn't seem to be listening while Skeletor plots with He-Man to stop him.

Maybe he was busy playing with Superman, who he has held in unbreakable magical bonds on Trolla. He messes with Superman a bit, in the process showing Superman the evil magic skull and wear he keeps it. I wonder if that will come back to bite Orko in the ass later..?

That's a rhetorical question. Orko doens't have an ass. 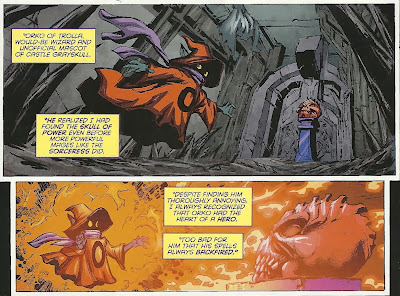 The thing is, I don't think the Secret Six existed in The New 52. The team changed quite a bit over the years, but it was originally formed by Lex Luthor during the events leading up to the out-of-continuity Infinite Crisis, in the also-out-of-continuity Villains United.

Some of the original Six—Deadshot, Catman, Scandal Savage, Ragdoll II, Cheshire and a Parademon—still exist. Of those, I think Catman is the only one who has yet to be re-introduced into the New 52, but, of the others, they all seem pretty different (I've seen Ragdoll pop up in Arkham War, and there was a DC Comics Presents arc about Vandal Savage and a daughter; was it Scandal?). In fact, I'm not sure that the Parademon could be on the team, since they seem to be robots now...? (At least, The Justice League sure slaughtered them like they were completely artificial creatures).

The line-up rotated pretty much constantly, with only Deadshot, Catman, Scandal and Ragdoll sticking around for each incarnation, but a few of 'em don't seem to have existed yet—Jeanette, Knockout—and a few of them have been introduced, but in forms that it's difficult to imagine them in that particular team (Bane, for example).

And, of course, all of their adventures in Secret Six and the Villains United stories were tied into DC continuity no longer existent, so pretty much all of those events would need to be chucked out if the Secret Six did still exist in The New 52.

I imagine this was just a mistake on Giffen and Bedard's part though. Otherwise, the Secret Six, like The Justice League (only less so, given their much shorter life span), would be one of those teams wherein they supposedly had all the same adventures, just radically different, the differences of which DC doesn't know and won't tell readers.

Anyway, Skeletor meets them all at the door, and between he and Queen He-Man's Mom they convince the newcomers that they all need to team-up to fight Orko and save the DC Universe...and that before they got there, Skeletor snuck He-Man into Trolla to try and free Superman.

This is just a short, three-panel page, in which Deadman interrupts everyone to tell them that "pretty much everybody" is in the process of attacking the House. 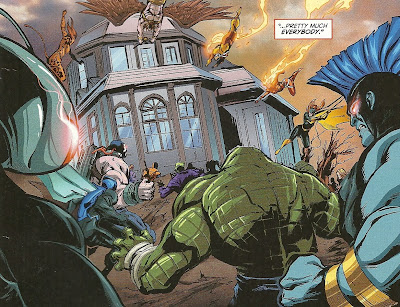 The figures are in long-shot in the second panel, so it's sort of difficult to make some of them out, aside from those already shown as being mind-controlled, like Black Manta, Blue Beetle, Killer Croc, OMAC, Cheetah and Firestorm. There's also Batgirl, Bane, Hawkman, Deahstroke, a second, female Firestorm (New 52 Firehawk?) and...hey, whose that guy in purple with green hair...? That's not...

Oh shit, it is! That's The Joker, completely with his New 52 sliced-off face—the one I thought The Joker's Daughter was currently wearing on her face—like a mask. 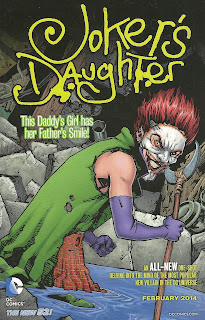 (In fact, there was an ad for that gross Joker's Daughter one-shot in this very comic. Did you guys check that out? She eats The Joker's long-ago flayed-off face that she finds in the sewer on the very first page.)

Why, it's the first in-continuity appearance of The Joker since Scott Snyder and Greg Capullo and company's "Death of The Family"...!

Right below that panel revealing that The Joker has returned not in the pages of Batman or Forever Evil, but in DC Universe Vs. Masters of The Universe #5, are printed what, by the time I finished this issue, were among my three favorite words in the English language:

The original SECRET SIX comics from the 60s had nothing to do with Lex Luthor or post-crisis continuity, and definitely not connected to VILLAINS UNITED. As a team of non superpowered characters, this is more likely the organization Batman is referring to.

Did they use the House of Secrets as their base of operations, as the more recent version did? I'm only really familiar with the Gail Simone team and the one from ACTION COMICS WEEKLY; having only seen the original team in flashback or out-of-continuity stuff (Well now, actually, everything's out of continuity).

These reviews have been so entertaining. Thanks for reading this series so the rest of us don't have to!

Now when will they do a DC Universe vs. She-Ra story, where the big villain turns out to be Kowl?