Hey, these sales on Marvel comics seem kind of extremely super-low, don't they? 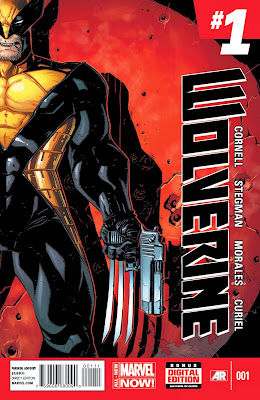 Marvel Entertainment's comics line seems to be in a pretty great place right now—creatively. I think their marketing, their pricing, their numbering and their shipping schedules are all kinds of bonkers at the moment, of course, but they seem to have pursued an interesting, post-Daredevil, post-Hawkeye strategy with their B-list (and lower) characters and concepts over the past few years.

The guiding principle seems to be to find good writers and good artists, and give them books on which they are encouraged to employ their own take and make their own mark. If it only lasts a year, it only lasts a year—they'll still produce a year's worth of great comics, and be able to fill a couple of trade paperbacks (I wonder how much of this is simply trying to "Hawkeyze" their books that aren't Avengers, X-Men or Spider-Man books, and how much of that is because Marvel now makes it's real money through film and television, and the comics line is being approached more as a low-stakes laboratory for different, hopefully salable to other media takes on the character catalog.)

As the publisher recently embarked upon it's All-New Marvel Now initiative, following its previous, seemingly in-response-to-The-New-52 "Marvel NOW!" initiative, we've seen what sure looks like an increased willingness to try making headliners of perennial not-headliners (Silver Surfer, Moon Knight, Ghost Rider, Punisher*) and female characters (Black Widow, She-Hulk, Ms. Marvel, Elektra), and, yes, some of those characters do indeed belong in both groups.

I haven't caught up with the last two crossover event series yet (Age of Ultron and Infinity), and pretty far behind on a few of the big Marvel franchises (I haven't read an Avengers book since around the time of Siege, I think, and "Spider Island" was the last Spider-Man storyline I read), but I'm even enjoying the flagship X-Men books at the moment, and those mix two things I am not terribly found of—Brian Michael Bendis-scripted super-team comics and the fucking X-Men.

So while I have a hard time figuring out what to read and in what order a lot of the time, and while I trade-wait the majority of their comics because I can't fucking afford (and am not willing) to pay $3.99 once or twice a month for $3 worth of comics, and while I roll my eyes so much at their numbering and shipping schemes while reading Marvel's solicitations every month that I get dizzy, as a reader reacting purely to content? Marvel seems to be in a pretty good place at the moment.

So how are they selling?

Hell, I don't know. The Big Two closely guard real sales data more carefully than their heroes used to guard their secret identities. But based on what we outsiders get access to, they don't seem to be setting the world on fire at the moment...certainly not according to the sales analysis provided at The Beat by Jason Enright.

Their top-selling book for the month of February was apparently Wolverine #1, which moved just shy of 90,000 units...and when its second issue shipped, during same month it was already down to 47,000-ish. That can't be healthy to have a second issue drop of almost 50%, and to have it come, like, two weeks rather than four weeks after the first issue, can it? Marvel may be getting more sales of widgets by making more widgets and shipping 'em faster, but they still have to pay the widget-makers for both widgets (as well as all the other related costs of making them), and they're accelerating the inherent sales entropy by accelerating their publishing schedule.

I was actually surprised to see Wolverine at the top of Marvel's heap for the month, as the character out-sold all their usual sales juggernaut franchises, and once-reliable sales draw Brian Michael Bendis. I think Wolverine #1 was a particularly interesting book to watch too simply because it was probably the most unnecessary of the "All-New Marvel Now" relaunches; not only does this relaunch follow the last one by about one year, it was completely random—there was no change in writer, no real change in direction and, in fact, seemed to be following the plot from the past "volume" of the series. Along with Daredevil—which changed only the setting and the price of the book between the last issue of the previous volume and the first issue of the All-New Marvel Now relaunch—Wolverine seemed like the relaunch most designed to try the market's collective patience.

So it's probably worth noting that not only was it Marvel's number one book of February (which either shows the strategy to be a success, or shows the weakness of the rest of the line in the current market), but it apparently sold a hell of a lot worse than the last Wolverine #1, which the chart shows at close to 118,000. It would appear there are diminishing returns to the constant relaunches, and since that seems to be Marvel's bit, pervasive sales strategy at the moment, well, yikes.

Everything else sold like hell. Superior Spider-Man was the only other comic over 80K, which is obviously pretty good, but the third book on the chart is Fantastic fucking Four, which also relaunched, but with the not-so-hot number of 66,000-ish (For the record, in addition to a new creative team and new costumes and new direction, Fantastic Four also had a new price point of $3.99...which is the only reason I didn't buy and read it).

What we'd normally think of as the "big" books—Avengers, New Avengers, All-New X-Men, Uncanny X-Men, etc—all seem to be grouped around 50K.

As for the new, All-New launches, the much-discussed Ms. Marvel only generated a little over 50K itself...making it one of Marvel's better-sellers for the month, but also starting at such a low point that the inevitable deterioration of sales means it's not going to be around 50K very long. If it suffers a second-issue sales drop akin to, say, that of Wolverine, then it could be in cancellation territory within the first few months (Or not; as talented as that creative team is, I imagine they're also cheaper than, say, Brian Michael Bendis and Stuart Immonen). Given all the hype regarding this book, I really, really expected it to sell much, much better than it did; was it a matter of the hype not translating into sales (of paper copies, anyway), or was the delay between the hype and the actual release of the actual comic simply too great? Potential readers might have heard Stephen Colbert joking about it a couple of months ago, but forgotten all about it by February, you k now?

Some of those debuts seem like they have to be huge disappointments (unless they're selling like mad digitally), like Ms. Marvel and X-Force, while other seem to be pretty respectable numbers for idiosyncratic books, like Loki and She-Hulk.

Anyway, it doesn't look like February was a great month for Marvel, which only alarms me personally in that I think their current overall strategy has been producing better comics than their overall strategy of a few years ago, and I'd hate to see the market reject it so soundly that they quit making comics like Superior Foes of Spider-Man and Ms. Marvel and hiring pencil artists like Mike Allred.

Oh, hey, as I was writing this, The Beat posted their analysis of DC's sales for the same month, by David Carter.

1.) Scott Snyder, Greg Capullo and Batman make for the greatest combination in comics, based on the $4 Batman #28's sales of 114,000 or so** (And it didn't have much of anything to do with The New 52 debut of The Spoiler, as that 114,000 figure, higher than everything DC and Marvel published in February, was Batman's lowest sales figure in months). (Jesus.)

2.) That particular issue wasn't that great, as it was essentially a standalone, out-of-context preview to a status quo that hasn't been achieved yet, but, in general, Batman is a pretty good comic book...one of DC's better and, I should note, in comparison to Marvel's line, creatively, DC is getting their asses kicked, so it's sorta weird to compare and contrast some of these numbers; sales and quality don't really have anything to do with one another—WHO KNEW?!?! (Also, most DC comics are cheaper than most Marvel comics; is that a factor).

Still, it's really rather weird to see things like the second and third issue of Harley Quinn, a well-drawn comic book that is nevertheless really rather terrible, outselling the second issue of a new Wolverine series (I can't speak to its quality; I read the first volume of Paul Cornell's Wolverine run, and thought that was pretty good comics, but haven't read on past it yet).

3.) DC shouldn't have hired David Finch to draw Forever Evil in addition to being a terrible, terrible artist, he has apparently also fallen behind schedule, which is why FE was a bit late—January's issue shipped the first week of February, if I recall correctly—and Carter mentions that if FE is late, it's going to delay some of the major tie-in books, like Justice League, which is usually DC's best-selling not-Batman book. Strange how that guy who is always late on everything turned out to be late on this book too—WHO COULD HAVE FORESEEN THIS SHOCKING TURN OF EVENTS?!—and even the fact that Johns has been writing somewhere in the neighborhood of five or six splashes into each issue hasn't helped keep the book on schedule.


*All of whom have had their days in the past, periods where they were hot characters anchoring a monthly and, in a few cases, multiple titles, but none of whom have had much luck in getting something going and keeping it going in the last, oh, ten years or so

**Yeah, yeah, Dustine Nguyen penciled Batman #28, not Capullo, I know. I just meant in general.
Posted by Caleb at 7:51 PM

Specifically in regards to your observation on the connection between Ms. Marvel's hype and its sales, I think that if publishers want to use the media outlets to create buzz about their titles they should maybe do so a little closer to their release.

I think two weeks is probably a pretty good timeframe, as after the initial round of announcement frenzy there's the follow-up coverage, which is often discussing and breaking down said groundbreaking/controversial move.

It'd still be in the public consciousness which obviously, I think, would translate to better sales.

I wonder if the low sales of Ms. Marvel were simply because they didn't print more than 50,000 copies. When I went to get a copy it was sold out. I visited three different comic shops and it was sold out. I had to wait 'til a second printing weeks later.

You fill me with trepidation. I've been enjoying the heck out of the oddball Marvel books, and, since usually my approbation is the kiss of death, I am afraid that low sales will once again stifle any creativity.

But "Forever Evil" which has actually been going ON Forever...being late? Well fry me for a donut!