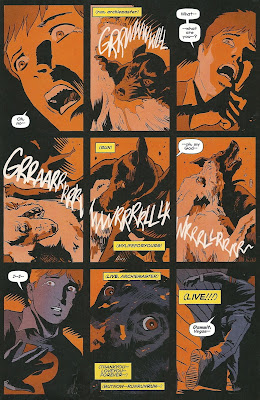 Afterlife With Archie #4 (Archie Comics) This installment of the shockingly adult-oriented and genuinely scary zombiepocalpse-in-Riverdale comic by Roberto Aguirre-Sacasa and Francesco Francavilla (who colors the whole affair in black, orange and blue) contains a pretty ballsy scene in which Cheryl Blossom and her brother Jason sure sound like they're talking about his incestuous lust for her, and something I was 100% positive I'd never, ever see in an Archie comic: Archie Andrews beating his father to death with a baseball bat while panting, crying and saying "I love you."

Oddly though, the most affecting scene was the one in which Archie's dog heroically tries to hold off the zombie-fied Hotdog so Archie can escape. That second-to-last panel on the page above, where Francavilla captures that look in the dog's eyes? That seriously broke my heart.

Oh, and hey, Archie Andrews said "dammit." I didn't even notice until just now, what with all the head bashing in and all.

Four issues and almost 90 pages in, I still can't believe this book actually exists. But damn am I glad it does.

Finally, I know I complain about the $3.99 price of Marvel and—increasingly—DC Comics, but here's a pretty good example of why I find the prcicing outrageous rather than an acceptable industry practice. This comic features a 23-page story completely uninterrupted by ads, and a six-page black-and-white reprint, and fancy cover stock, and it costs $2.99. Meanwhile, Marvel is charging $4 for a 19-page Moon Knight comic. 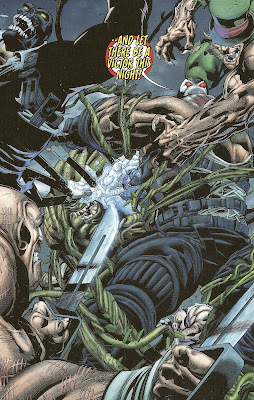 But last month, when I went to look for the fifth issue on its day of release, it was all sold out, and they never got any more in to rack alongside the handfuls of issues #1-4 on the Forever Evil display.

So I guess that means either the series is so popular that it sold out and my shop wasn't able to get enough to meet demand, or it was so unpopular that they adjusted their orders down from the too-optimistic ordering of the first two-thirds of the series, so as to avoid having 6-10 issues of it on the rack as they did with the first few issues. I don't know which, but it almost certainly means one of those things.

It also means that I missed the fifth issue. I'm not exactly sure what happened, but it doesn't seem to have been very pivotal, as this was easy enough to follow. Bane is pretty badly beaten up at the beginning of this issue, and has taken off his homemade Batman costume in order to solder his many wounds shut with a blowtorch while standing in a pool of his own blood (I'm not a doctor, but I don't think that's really the best way to deal with flesh wounds.

Oh, and all of the Arkhamites are drawn by artist Scot Eaton with the same big, goofy, Incredible Hulk-like proportions that he has given Bane. They are all amped-up on Venom, the apparently helium and gamma radiation-derived super-steroid that gives Bane his ridiculous-looking proportions. (If that plot point sounds familiar, then you may have had the misfortune of reading Batman: The Dark Knight Vol. 1—Knight Terrors by David Finch and Paul Jenkins, in which Bane himself had given all of the Arkham inmates a version of his Venom (In that story, he was working with The Scarecrow, who concocted a hybrid of Venom and a fear serum for Bane; here Bane and Scarecrow are bitter enemies, and Bane seems shocked to discover that Scarecrow has somehow worked out how to make Venom, although their previous collaboration wasn't mentioned. That was, after all, months ago. The New 52 continuity is almost two-and-a-half years old now! Who can keep track of all that?).

During the two months or so since I read an issue of this, it was also revealed in the pages of Forever Evil that the Crime Syndicate attacked earth less than two days ago, which means everything that has happened in this series—which, remember, includes Gotham completely spiraling out of all control of the the police department and other city and state institutions, and the city being carved-up and assigned to various villains ala 1999 "No Man's Land" event—has happened in less than two days.

This joins "Hey, what the heck is Batgirl, who was in Forever Evil #1, and the other Gotham City heroes doing while this is going on?" as something that bugs me about this series.

So anyway, the Venomized Arkhamites attack Blackgate Prison, and Bane, now once more dressed like Bane, and a Talon fight back (Bane defeats Clayface, who, remember, is sentient Clay, by punching him really hard; I'm not sure that's "realistic"). Man-Bat swoops in and picks up Bane, and they all retreat to Arkham Asylum, where they plan to beat Bane to death. He fights them all in a six-page action sequence, one third of which is a two-page splash (the second in this 20-page comic book featuring the Venomized Arkhamites!) that reminded me of Abhay's review of the first five issues of this series: "It’s a lot of pages of all the Batman villains posing at each other (which, with only a few exceptions, is what mainstream comics call “fight scenes”)."

Bane beats them all up (but doesn't kill any of 'em, I bet!), which he explains while beating them up is because they're bodies are reacting negatively to the Venom, which they haven't had the lifetime to master that Bane has had, I think...?

Then suddenly The Penguin appears slow-clapping with a bunch of armed guys in mardi gras masks, and he offers Bane a deal: He'll give Bane his help and logistical experience in exchange for all the unconscious Arkhamites. Bane agrees, as long as he gets to keep The Scarecrow.


FOREVER EVIL: ARKHAM WAR #6
Written by PETER J. TOMASI
Art by SCOT EATON and JAIME MENDOZA
Cover by JASON FABOK
...
On sale MARCH 5 • 32 pg, FC, 6 of 6, $2.99 US • RATED T
...
The final battle for Gotham City starts now! The Scarecrow has unleashed a mutated army of Arkham’s worst killers, and only Bane can stop them! It all leads into FOREVER EVIL #7!

Huh. Well, it was also supposed to be a six-issue series, but it says "NEXT: BLACK DAWN!" in the last panel. Which I guess is referring to April's extra-sized one-shot follow-up Forever Evil Aftermath: Batman Vs. Bane #1, by the Peter Tomasi, Scott Eaton and Jaime Mendoza creative team that gave us Arkham War, unless DC later decided to turn that into Arkham War #7. 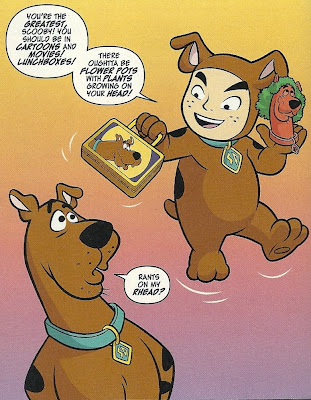 Scooby-Doo Team-Up #3 (DC) Saying this is the best issue of the series so far probably doesn't carry that much weight, as there have only been three issues, but it is the best issue of the series so far. In the third consecutive Batman/Scooby team-up, the Dynamic Duo and Mystery Inc are in the process of busting Bat-villains False Face and The Spook (the latter of whom is a minor rogue who uses trickery to pretend to be a ghost, and thus basically is a Scooby-Doo villain; I believe he was last seen in continuity when Damian Wayne beheaded him with a sword at the start of Grant Morrison's Batman run) when who should show up but Bat-Mite.

Thanks to his Fifth Dimensional imp magic, there is quite literally a gag per panel in this book from the point he shows up on (mid-way through page 2), but it's not simply Bat-Mite turning everyone into babies or ponies for the fun of it. He's soon joined by Scooby-Mite, who is to Scooby-Doo as Bat-Mite is to Batman.

No, seriously, it does. I know people usually say "hilarity ensues" sarcastically, or with at least a hint of irony, but I'm not kidding. This is hilarious, and packed with jokes, several of which are references for grown-up Batman and Scooby-Doo fans.

Artist Dario Brizuela once again does an incredible job of drawing the Scooby-Doo cast completely on-model, while modulating the Batman characters just so, so that they appear to be themselves but also to belong in the same space as Scooby and the gang. And, it should go without saying, that here he gets to draw all sorts of crazy stuff: Velma and Daphne in Batgirl costumes, Steam Punk Scooby-Doo, zombies eating Scooby Snacks, etc. (That said, he draws some terrible lions; I'm assuming they are supposed to be particular lions from a particular episode of a Scooby-Doo cartoon I can't remember, given how un-lion-like they look).

Anyway, if you've been at all curious about this series but have yet to give it a shot, this is definitely the issue to sample. 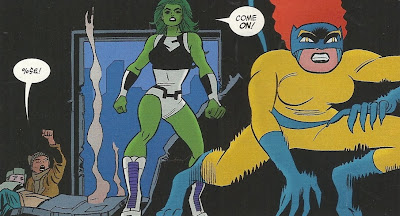 She-Hulk #2 (Marvel Entertainment) In the second issue of the surprisingly good new She-Hulk series, writer Charles Soule devotes himself to some world-building—or at least setting and premise building—as Shulkie gets a tour of her new office space (in a building owned by an ex-mutant who only rents office space to people with super-powers), hires a mysterious assistant with some weird shit going on (including always having a monkey in her presence) and goes out for drinks—so many drinks—with Patsy Walker, Hellcat. Patsy gets wasted on margaritas—seven of 'em—and then somehow convinces She-Hulk to suit up with her and go bust an AIM base she knows about. Once again, robots are fought (Or at least mechanized battle suits; close enough).

As was the case with the previous issue, the main attraction for me is the presence of Javier Pulio, brightly, brilliantly colored by Munsta Vicente, whose stripped-down, simplified work is a joy to behold. There are only 20 pages in this issue, but it feels and reads like a lot more, thanks to Pulido's many-panels per page, and the amount of visual content in each (This issue probably took me almost twice as long to read as the 24-page Forever Evil #6, for example, and that was with having to occasionally pause to figure out what David Finch was drawing exactly in FE).

There's a pretty great use of a two-page splash in this issue, maybe the best use of a splash I've read since the Black Canary issue of All-Star Batman and Robin, The Boy Wonder (at least that I can remember off the top of my head).

I'm not sure how I feel about She-Hulk's new costume, as it includes both an S and an H on it, and generally costumes with two letters rather than one on them are bad. But these letters are pretty far apart, and somewhat subtle in their integration into the design (at least compared to, say, the "GF" in Geo-Force's green and yellow costume).

Pulido draws Hellcat's classic costume quite well, and there are some really nice panels of her in action, including one in which she climbs and flips her way up to the third story of a building, and another where she lands cat-like on the floor, the lines of her legs drawn slightly wiggly to denote movement (and, perhaps incidentally, suggesting a cartoon cat with its hair raised).
Posted by Caleb at 12:43 AM

I was disappointed you didn't mention She-Hulk coppin' a feel, but then I moseyed on over to yer Tumblr & saw you took care of it over yonder so I apologize for ever doubting you. (But then again, no mention of her spermy eyes?!)
Thanks for being who you are...