Review: Wolverine and The X-Men Vol. 5 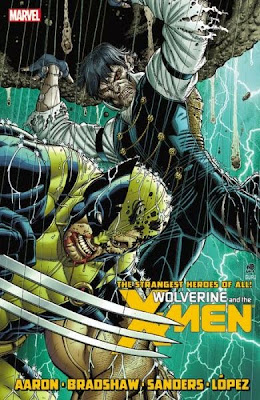 The fifth collection of the Jason Aaron-written, many artist-illustrated X-Men series set at the Jean Grey school highlights one of the aspects of the book that have helped make it such a welcome and engaging X-Men comic: Superhero school sitcom premise aside, it is really more of a straightforward superhero book than a Marvel mutant book; the characters occasionally deal with threats and conflicts that aren't completely reliant on their being mutants or X-Men.

That is, they don't continuously cycle through Magneto, Apocalypse and Mister Sinister as villains, or spend all their time fighting for survival against mutant hate groups and anti-mutant religious and political leaders. Sometimes they fight Swarm (at least for a page), often they deal with space aliens, and once in a while they encounter something like Frankenstein's Murder Circus, the conflict that dominates this collection, which includes #19-#24. (That's only six issues, but they're drawn by three different pencil artists, five inkers and three colorists; I guess that's the result of the accelerated shipping, and why this series is technically called "Wolverine and The X-Men By Jason Aaron" in collected form).

Now, Frankenstein and his Murder Circus are in the book because of links to other, recurring X-Men villains: The Monster is hunting down and killing all of his makers' descendants, the last of whom is a member of the current incarnation of The Hellfire Club (the evil kids that have been the main antagonists of this series so far), and the witch whose magic is powering the circus has a connection to another evil X-Men character who will apparently play a big role in the X-Men title that Aaron will spin-out of this one (and was featured in the last X-Men movie; his design in this volume reflecting that design). But it's a threat that could have just as easily faced the Fantastic Four or The Avengers; with a little tinkering to shed some copyrighted characters and trademarked names, it could have stood as its own, as an original invention of Aaron's, designed and illustrated by Bradshaw.

That three-issue arc finds the students awaking one day to a completely teacher-less school. The faculty—Beast, Iceman, Kitty Pryde, Warbird, Rachel Grey, Doop, Toad and brand-new headmistress Storm are all performing in the circus, with little or no memory of who they really are, each with an act at least somewhat related to their names and powers. As for the title character? That would be Revolto The Clown, who is brutally beaten by zombie clowns, only to have his healing factor keep him from dying at the end of each show.

It's up to the students, including the new recruits Shark Girl and Eye Boy, to awaken their teachers, save the townsfolk and combat the sinister circus.
I suppose that, theoretically, someone somewhere could really quibble with Aaron's treatment of Frankenstein, who looks, talks and acts quite different in this particular story than in at least the last dozen times I've seen him in Marvel Comics, although this is the same monster (There's a panel of him in his furry vest, and a line of dialogue where The Legion of Monsters is mentioned). In terms of the Wolverine and The X-Men, it hardly matters; and I don't know that the character has had any sort of internal logic that really needs govern his appearances, as he's basically just a perpetual guest-star anyway.

Bradshaw's version sure is a snappy dresser, anyway. 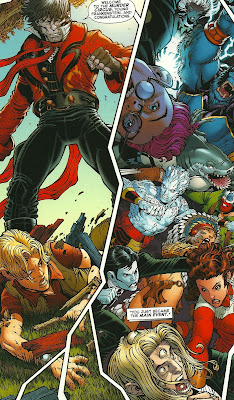 Bradshaw draws the entire Murder Circus art, and it's all-around great, even impeccable stuff. He's perfectly suited to superheroics, horror, action and humor, and this story calls on him to do them all—often on the same page.

While the story makes up the bulk of this volume, it's book-ended by others. The trade opens with a nice post-Avengers vs. X-Men issue, in which we check in with various players and get a sense of the new status quo. There are new students like the aforementioned Eye Boy and another who will become Sprite in the next volume; Beast is desperately trying to save the life of Broo, who was seemingly shot dead at the end of the last volume; Wolverine and Rachel are hunting for his killers; his killers are setting up shop near the school; and Kitty Pryde is interviewing potential new teachers from throughout the Marvel Universe.

That last bit is basically just an issue-long running gag, and Kitty's a little too curt to be taken seriously, shouting "Next!" like a casting agent, but it does give us the opportunity to see how Bradshaw draws a whole mess of different Marvel characters, and hear a joke or four about each.

These include, among others, Blade, Sasquatch, Puck, Dr. Nemesis, Longshot, Spider-Man, Gorilla Man, Deadpool (repeatedly) and so on (Bradshaw's Ghost Rider skull and his Sasquatch are both particularly accomplished). The job goes to Storm, though, seen here with Kitty rubbing her breasts in her crotch. 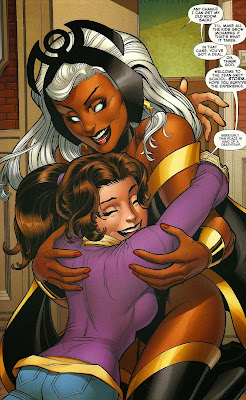 That's followed by a one-issue story drawn by Steve Sanders (wait, that can't be right, can it?), in which we meet new mutant Shark Girl, who Angel manages to recruit to the Jean Grey Academy before Mystique and the Silver Samurai can recruit her for the new villain school for mutants that the bad guys are apparently setting up.

Then, after the Murder Circus storyline, there's another done-in one, this one drawn by David Lopez and Alvaro Lopez, which is another sort of catch-up story, set after the events of All-New X-Men (Time-lost teen Jean Grey shows up for a scene with Quentin Quire, for example, and Beast's new ape-ish look is seen in this title for the first time; it's a shame, given how good Bradshaw drew a lion-like Beast). It's mostly soap opera stuff, with various pairings of characters going on dates, discuss their relationships and kissing in one way or another.

As always, Aaron's writing is super-strong, and while the art in this issue may be the weakest in this particular collection, it's not like it's bad or anything. This is the second consecutive trade to close with a shocking cliffhanger involving Broo, too.
Posted by Caleb at 8:23 PM

I`m so excited for this trade that I`ll prolly end up reading after fife years or something!