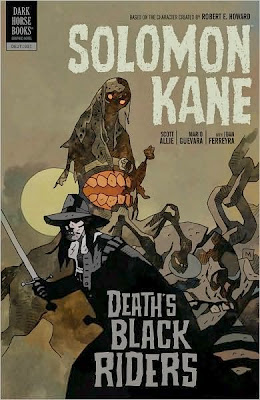 Dark Horse's second miniseries featuring Robert E. Howard's late 17th century Puritan vanquisher of evil, Solomon Kane: Death's Black Riders was published in 2010. Like its predecessor, The Castle of the Devil, it was the work of writer Scott Allie and artist Mario Guevara, and based on an unfinished fragment of Howard's...with an adaptation of short story "Rattle of Bones" nestled somewhat uncomfortably within the extrapolated title story.

It's a pretty strong piece of pulp fiction turned elegantly illustrated pulp comics. Still wandering the Black Forest after his adventure in the previous series, Kane comes across a strange scene. A band of gypsies was in the process of being robbed by a pair of highwaymen, when the entire group was attacked by bizarre and hideous monsters. Kane intervenes, killing most of the creatures, and then he and one survivor hole up in a lonely inn called "The Cleft Skull," where "Rattle of Bones" is adapted...and then the monsters return in greater numbers to besiege the inn.

As with the previous volume, Mike Mignola provides a great cover, one so solid in design and execution that I wished the interior art was in the same style, and Guy Davis provides the monster designs, as the generous portion of backmatter makes clear.

And man, these are some really great monster designs. So great, in fact, that it almost seems a waste that Davis septn so much time and creative energy so thoroughly designing them, right down to forms of locomotion and the way the creatures might store their weapons on their bodies, that it seems a shame that they exist only in this miniseries, and even then, Guevara has somewhat redesigned them (Also as with the previous volume, there's a short comics story in here as well; "All the Damned Souls at Sea," which is drawn by Guy Davis and originally appeared in a pair of MySpace Dark Horse Presents issues. In it, Kane fights a scary-looking witch, and then a curse-created monster built out of boat pieces).

It's my understanding that the "Death's Black Riders" fragment is just that, a fragment, with only a few lines actually completed by Howard. Those lines involved Kane meeting, in the words of whoever handles the Sa olomon Kane Wikipedia page, "a shadowy ghost rider on the road."

In designing the riders, Allie said he wanted a monster that could be mistaken for Solomon Kane on the road at first sight, and, indeed, here is Guevara's first image of a rider from the story: 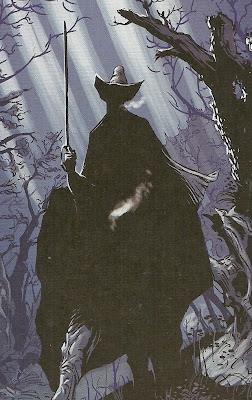 Davis said that, additionally, they didn't want the riders to resemble centaurs...which Mignola's monster on the cover rather does...aside from the gaping mouth where the human abdomen would be on a centaur. So, what Davis did, was to first sketch a silhouette of Kane on Horseback, and then reverse-engineer a monster that could make that shape from there, taking care to not simply make it into a centaur.

What he came up with is pretty fantastic: 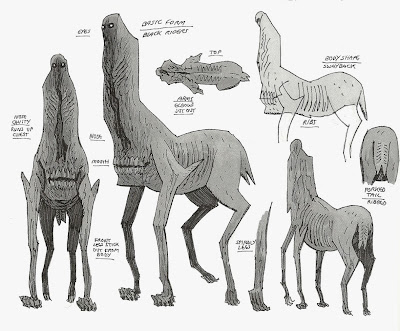 This seems to be a rather early design, but it's probably my favorite. I like who the entire front of the creature is one big, weird head shape. It looks a bit like the shadow of a centaur, but is rather some kind of scary quadraped with an large head, more vertical and rectangular than orb-like.

That design couldn't hold a sword, however, so Davis then gives his rider arms, and it looks almost completely alien now: 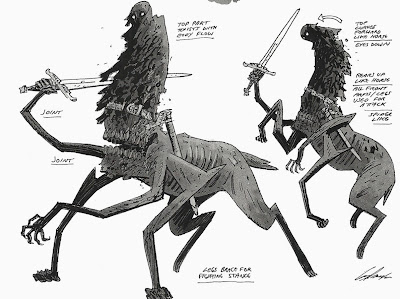 Not only does it have six limbs rather than four, but it's arms are all "wrong" by our standards, with multiple elbow-like joints. I also like how it retains the big, giant face. Davis basically further refines this design, even coming up with a neat solution as to how the creatures might walk around when they don't need their arms to fight with: 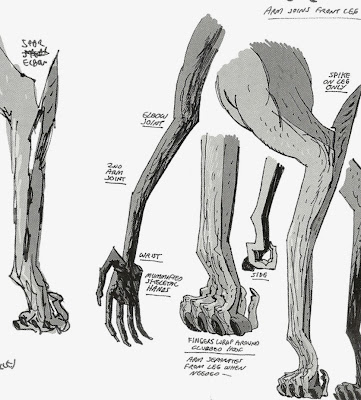 Guevara then took the designs and ran with them, coming up with several different variations, some of which do resemble monstrous, desiccated centaurs: 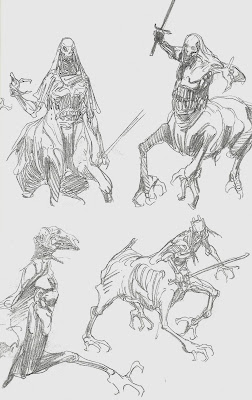 As they finally appear in the story, they have a pair of mouths, a detail that I didn't really like, as it seemed like a more generic, lazy monster; that is, assigning exaggerated human features or additional body parts, whereas the one-mouthed creatures had a bizarre, alien sense of anatomy; that is, they didn't look like men with mouths in their stomachs; the "other" mouth near the eyes make them seem a little too human.

Guevara draws each of the creatures a little different though. Here are some images of them: 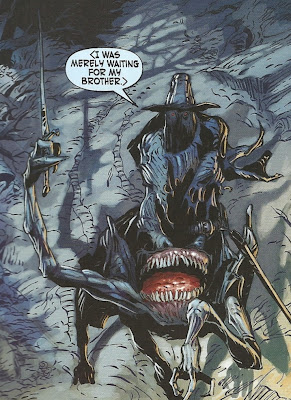 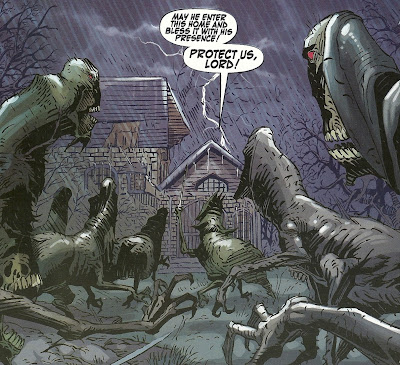 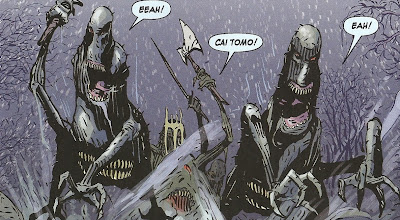 They have individualized modes of dress, and some have quite different faces, and a few even seem to have different numbers of limbs.

Finally, how artist Darrick Robertson, who drew the individual covers for each of the issues in the series, rendered the riders: 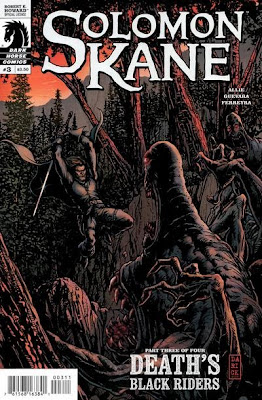 It would be very easy to imagine this story being completed with very different antagonists, more standard-issue monsters like Tolkein's Nazgul, or spectral or skeletal men on spectral or skeletal horses or something centaur-like, but the lengths that Davis and Guevara went in order to make unique monsters really elevated the proceedings into something worthy of fascination...atop the expected pleasures of the pulpy, tough guy-fighting-horrible monsters story.
Posted by Caleb at 9:49 PM

That is just scary as heck.