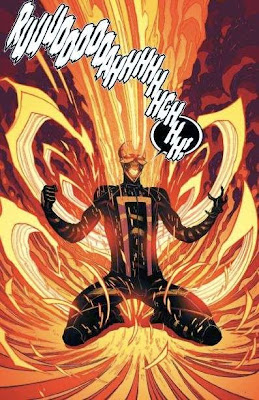 Okay, so there were two new comic book-comic books I read this week that I didn't review here last night: All-New Ghost Rider #1 and Silver Surfer #1. I did not review them here, because I was going to review them at Robot 6, and now I have.

Also at Robot 6 today, Tom Bondurant discusses Pandora and the more-confusing-than-ever cosmology of the DC Multiverse in the era of the New 52, while comparing and contrasting Forever Evil with the 2002 original graphic novel JLA/JSA: Virtue and Vice, which have a few things in common.

Pandora's fusing of the three universes—the DCU, the WildStorm Universe and the so-called Vertigo universe—annoyed me right from the start, as it didn't really make sense on a meta-level, not with what Pandora told The Flash (the argument could be made that the Vertigo imprint fractured the way the DC Universe was "meant" to be, but the WildStorm universe was never split from it), not with DC publishing history (There is no Vertigo Universe; the first crop of Vertigo characters were all from ongoing DC super-comics, and ever since, characters relatively regularly appeared on both sides of the imprint's border) and certainly not with what was going on, like, a month or two prior to Flashpoint (While the Doom Patrol and Animal Man were appearing regularly in the DCU for years since their Vertigo series ended, Swamp Thing and John Constantine had both been back for months as well).

Anyway, Bondurant's piece reminded me that, at the time of Flashpoint, there were 52 parallel dimensions in the DCU multiverse...one of which was the DCU ("New Earth") and one of which was the WildStorm Universe. If we go ahead and give DC the fact that there was a Vertigo Universe, then that would mean that Pandora fused three of the 52 universes, so now the multiverse would only have 50 universes, right?

But wait! The New 52 rejiggering didn't merely add to the DCU, it also subtracted—all of the Golden Age heroes, as well as a sizable chunk of the third generation of DC superheroes (Donna Troy, Aqualad, Flash II Wally West, Jade and Obsidian, etc) were banished from the new, fused DCU, many of them landing on a new Earth 2.

And that Earth 2 is a completely different Earth 2 than all the other, previous Earth 2s, just as the current Earth 3 is a brand-new version of Earth 3. So, I guess Pandora didn't just fuse three timelines, but she fused three timelines, subtracted large swathes of heroes and history from it, and rebooted at least two more timelines, creating or re-creating Earths 2 and 3...?

Jesus God this stuff is complicated. You would think that, by this point, DC would have learned that reboots only ever make things more complicated—it's just quicksand, and the more you struggle the faster you sink into it. (I suppose a pure reboot, one that did not involve the in-story justification of Flashpoint and Pandora could have avoided all of that, but I don't think anyone really wanted and "Ultimate" DC Universe...)

Virtue and Vice was a pretty great comic though; the DCU is a hell of a lot poorer without those characters in it today. And I liked the idea of an annual JSA/JLA Thanksgiving dinner, even if all we ever got out of it was that one great graphic novel and one great done-in-one issue of JSA in 2001.

Also also at Robot 6, there's a link to this very funny webcomic entitled "The Adventures of Business Cat." I liked it a lot.

Also also also at Robot 6, there's an image of Arthur Adams' cover for the upcoming Godzilla graphic novel tied to the upcoming Godzilla film. Is that the clearest look at the new Godzilla design so far...? I would assume so, as it wouldn't do to have an off-model Godzilla on the cover of the book. I like it; it looks an awful lot like the Godzilla Adams drew on his cover to IDW's ongoing Godzilla comic, but with smaller teeth and less separation between the head and neck. It's a pretty big departure from the previous Godzilla designs, but not as radical as the one in the last American Godzilla movie, which ought to make a lot of folks happy. Anyway, based on that one single image, it works for me.

I sure wish I knew what was up with the Godzilla comics license at the moment, though. I saw an IDW Godzilla comic—in which the title monster was battling the Frankensteins/Gargantuas!—on the new rack today. But the movie tie-in is being published by Legendary, and distributed through DC Comics...?

I hope IDW gets to hang on to the license; they've done some pretty great stuff with it (And their choices of artists have been much more inspired than those working on the Legendary graphic novel). And I'm actually really, really scared of a DC Comics Godzilla, for fear it would lead to a crossover with the DCU, and based on DC Universe Vs. Masters of The Universe, I have no desire to see the DCU do any sort of crossing-over with other franchises I like.

Unless I get to write it, I suppose. Speaking of which, I have a great idea for a DCU/Toho crossover! Superman, Godzilla? If you two are reading this, give me a call. The three of us should really sit down for a meeting.
Posted by Caleb at 8:36 PM

I'm assuming IDW has the Toei license for Godzilla. Legendary has its own comics arm, so it makes sense their picture would release through it (via DC, of course.)

That's why I can't be arsed with DC anymore, this latest reboot killed off its own history with none of the characters feeling real anymore and it's all too much to keep up with.

If any of the books in it had been any good, it may have been a different story, but from all I've seen that hasn't been the case either.

Mostly the DC 52 reboot has been nothing but a huge mess. You can't...you really just can't tell comic book fans, who have years and years of complicated continuity memorized to just forget about it,and here's the NEW stuff!

You also aren't going to get much in the way of new readers, who may come in, wonder why Superman is wearing that weird outfit, and leave.

I know you were being facetious about the "nobody really wants an ultimate DC" line, but I don't think that it is terrible if that is what the New 52 was.

The main problem with New 52 is that there is so much ambiguity when it comes to what past stories count or not. DC did not do us any favors by saying this still happened, only to later pull the rug out from under us and go "Ha Ha! Just kidding!"

For example, Teen Titans was originally supposed to just the next most current incarnation of Titans, but when they printed the TPB they changed some dialogue to imply that this is the only team of Titans.

An Ultimate DC launch would be more straight forward, easier to grasp, and honest.

Oh yeah, when I said that nobody really wanted an "Ultimate DC Comics," I meant the folks that work for DC as much as or more than any readers; I don't think any of them really wanted to do all of the long, arduous work of reinventing all the wheels. Rather, they just wanted to start writing Batman and drawing The Joker ASAP.

I think I've said before that a true, pure reboot, a starting over from scratch--kind of like their "Earth One" books--would have been preferable to the half-assed reboot they did, in which they skipped ahead and five years, so that there's this hidden, secret history/continuity...that no one actually knows. It's the worst of both worlds, really.

Caleb: I've always thought the Trinity War was supposed to be the JL, Vertigo (Earth-13 via Wikipedia), and Wildstorm (Earth-50). Not sure why Pandora/Flashpoint/I don't care called them timelines. When Wildstorm flopped, that might be where JLA came in. Just a hunch that the Crime Syndicate plus Forever Evil was part of the merging.

Like it means anything, but I do believe the nu52 had higher hopes for Wildstorm.

Sorry. Meant the "big threat" because it sure wasn't Darkseid.