Review: Wolverine and The X-Men Vol. 6 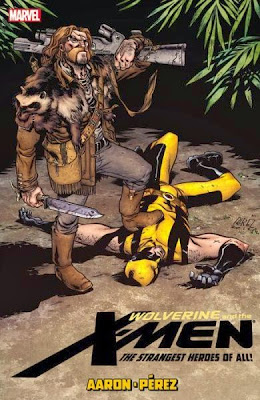 The sixth collection of the Jason Aaron-written, Jean Grey School-based X-Men comic differs from the previous ones in a few important ways.

First, it is all a single story arc running through its five issues; the fifth of those serves as a sort of epilogue and primes the pump for the next big storyline, but its climax is tied to the adventure that fils the first four issues.

Second, it actually has a single artist, from start to finish: Ramon Perez.

The premise is pretty straightforward, an X-Men-ized version of a common school experience: The field trip. For the super-powered mutant students of the Jean Grey School and their instructor Wolverine, however, the "field" in question is the dinosaur-filled Savage Land. Wolvie takes the kids—Quentin Quire, Idie, Genesis, Glob, Eye Boy, Shark Girl, the newly-christened Sprite and the still-monstrous Broo—in a Blackbird and drops them off with the following challenge: Survive together as a group without him long enough to find the waiting plane or, um, don't. It's a pass/fail class, obviously.

The challenge is made infinitely more difficult by the arrival of Dog Logan, Wolverine's big brother from Origin, who Jason Aaron picked up and explored as a potential rival, foil and villain for Wolverine in the present in the pages of Astonishing Spider-Man & Wolverine, aided by the "time diamonds" from that series, and egged on by a time-traveling version of himself to go after Wolverine.

He does so, but he's not just planning on beating up his now-famous little brother. Rather, he wants to prove himself a better teacher than Wolverine, so once he incapacitates the guy with his name on the book, Dog then hands out guns to the school kids, and leads them as they fight not only the dinosaurs of The Savage Land, but also the cowboys, cavemen and killer robots from the future that Dog himself brought with him.

It's a typically tightly-plotted story from Aaron, in which he shows the students pretty much disintegrating when left to their own devices, and then each coming into their own and almost instinctively forming a team when faced with the common threat of Dog. The narrative consistently flashes back to something Wolverine said privately to each of the students on the plane-ride to the Savage Land, something that turns out to be rather key to their triumph (Even in the case of Eye Boy, who responds to Wolvie's claim that he told each one of them all they needed to know, "Um, all you taught me was how to play five card stud").

Aaron also devotes some time to Dog as a character, showing his origin story from different angles—and, as in Astonishing Spider-Man & Wolverine, the passages set in Dog's past are rendered in such a way as to suggest the imagery of Origin, rather than the more straightforward super-comics look of the rest of the book.

Perez has a pretty challenging gig here, drawing not only a fairly large cast of colorful characters with fantastic powers in a prehistoric jungle setting, but also all the other crazy characters that crash the party. And then there's that last issue.

After the trip to the Savage Land ends, with the Jean Grey School losing a student to the emerging bad guys school, the final issue finds the entire school assembled for a time capsule ceremony, and then flashes forward 25 years, to the point where a gray haired, bearded Wolverine finds and opens it. I'm pretty sure Perez actually draws every single member of the entire school on the bottom half of a two-page splash, he then designs a whole new student body for the future version of the school, as well as drawing at least a few members of the "present" cast in new, future forms (Most notably former Eye Boy, Eye Man).

In this issue, Aaron has the two narratives inform one another, and, notably updates past conflicts for the future and teases the outcomes of various sub-plots (There's a student who has both Ice Man and Kitty Pryde's powers, Shark Girl is the leader of an X-Force Squad, Eye Man detects "what appears to be a dirigible of human remains...I'm guessing Frankenstein, Inc. is back in business").

As with the previous five volumes, this one is a lot of fun. And, thanks to Perez, it's a a great-looking volume, from start to finish.
Posted by Caleb at 5:59 PM

I can't get over Eye boy's design. I have a weird thing against misplaced eyes, so seeing it all over his body is gross. Lol.