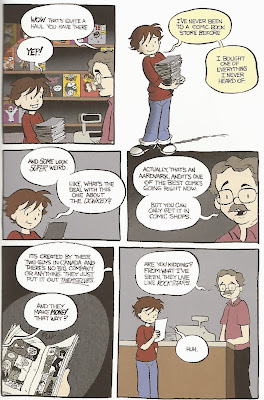 In Jimmy Gownley's The Dumbest Idea Ever, a new memoir comic in which the Amelia Rules cartoonist recounts how he first became a comic book creator, Gownley recounts his first trip to a comic book store. It's a pretty great sequence that should ring true to any comics lover of a certain age who remembers the first time they discovered there were these places where they sold nothing but comics. Most of the titles and covers featured in the scene are made-up ones, with the exception of Dave Sim and Gerhard's Cerebus. You know, the super weird comic about a donkey.

Cerebus makes an encore appearance later in the book as well, when young Jimmy Gownley is feeling a little lost and, late one night, he realizes what the existence of Cerebus signifies. 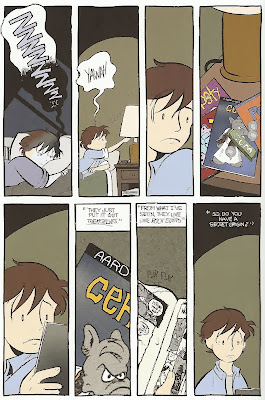 You know, that you can make, publish and sell your own comic books. (By the way, I have a review of Dumbest Idea Ever here).
Posted by Caleb at 6:54 PM

I've been meditating on Cerebus at length lately, trying to figure out what it's taught me and what I simply don't care about-- namely the gossipy elements related to (& perpetuated by) the author.

Even Jason Shiga's been mulling over Cerebus. Must be something in the water.