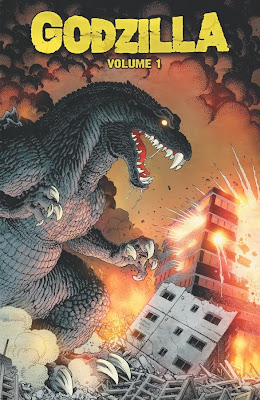 When Legendary Pictures released the first trailer for this summer's Hollywood Godzilla reboot a while back, the idea was—obviously—to get people excited about the upcoming film. As a survivor of the 1998 Godzilla, I'm afraid I can't muster any stronger emotion than "cautious" or "curious" when it comes to the new film, but the trailer did remind me of the big guy, and set me on two different paths of catching up with him.

First, I decided I'd start watching and/or re-watching the Godzilla and Toho kaiju movies in an organized fashion (if that's an area of interest for you, I discussed Godzilla Raids Again and Frankenstein Conquers The World in the last "EVERYTHING ELSE" post; the next such post will cover Rodan, Mothra and War of the Gargantuas...at the very least).

Second, it reminded me that I had yet to read James Stokoe's Godzilla: The Half-Century War, which I was trade-waiting. I got right on that and, given how excellent that particular IDW Godzilla comic turned out to be, I started looking for all the other IDW Godzilla books I could find through Ohio libraries (Sadly, they're not as easy to find in libraries as virtually any Marvel, DC or manga collection, so I may have to invest some money if I want to find out how some of these stories turn out—and I do!).

The first I found was the sub-title-less Godzilla, which I believe is the series that showed up on Diamond's shipping lists as "GODZILLA ONGOING" (As with many of IDW's licensed comics, the publisher immediately exploded it into a franchise with multiple books with different, event dueling continuities, making it hard to keep up or catch up. In addition to Godzilla (Ongoing?) and the aforementioned Half-Century War, they've also published/are publishing Godzilla Legends, Godzilla: Kingdom of Monsters, Godzilla: Gangsters & Goliaths and Godzilla: Rulers of The Earth).

This is the series written by Duane Swierczynski, one of the handful of prose crime fiction writers who found a side gig in writing comics. In his case, they've mostly been for Marvel (Cable, Immortal Iron Fist, some stuff featuring The Punisher, Moon Knight and Deadpool), and he also launched the New 52 Birds of Prey for DC* and is currently writing for Dark Horse and Valiant.

Of greater interest (to me personally, anyway), is the artist on the creative team for this particular comic: Simon Gane. Particularly expert at drawing cute girls, cool fashion and detailed urban areas, he's probably best known for his Vertigo work, the major focus of which was the art on the shortlived Vinyl Underground series. He's not an artist I would have thought would either be game or be good for a giant monster comic, but that is because I am dumb—turns out he actually already had a giant monster comic (of a sort) on his resume.

So what have these creators I primarily know of for scripting street-level superheros and sketching pretty girls online come up with?

A super-solid premise for a giant monster comic, one that I haven't seen or heard before (certainly not in relation to Godzilla), one that includes a large swathe of the Toho monster menagerie, and one that that sounds like it could potentially be the basis of a kick-ass action movie...were it not for the fact that there is so much action, destruction, monster mayhem and kick-assery, it would probably be too expensive to actually commit to celluloid (Hollywood's still working on getting one kaiju on the big screen; they can't possibly be ready for a half-dozen or more). 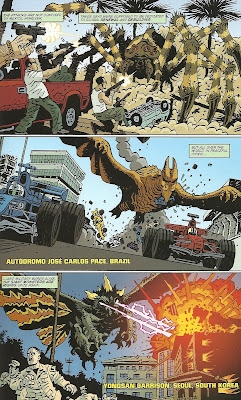 So giant monsters are arising and wreaking havoc all over the world. Giant spider Kumonga in Mexico, Rodan in Brazil, Battra in South Korea, and Godzilla himself in the good old US of A. Retired soldier Boxer, who has had dealings with Godzilla in the past, is currently serving as the body guard of a young Japanese girl in Washington D.C., when who should attack the very skyscraper they're in then the King of Monsters himself. 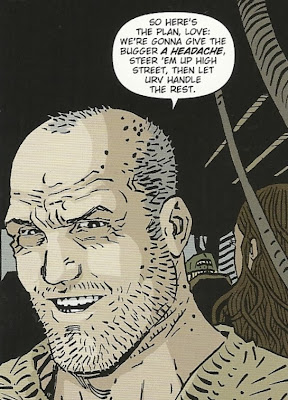 Boxer, who Gane has fan-cast as Jason Statham**, gets the girl to safety, only to lose her to the stupidity of others. With more reason ever to have a grudge against Godzilla, and with his life suddenly needing new direction, he comes up with a great idea—for a comic book, if not a career. He gathers a band of acquaintances and former allies who have similarly lost something to giant monsters: Demolitions expert Urv, driver Harrison and army scientist Claire Plangman, inventer of a "headache gun" that can't exactly slay the dragons, but can prod, push and otherwise annoy them.

When Anguirus attacks Edinburgh in the second issue, Boxer takes his team in...but not before first asking for a seven billion-pound bounty. He gets it, and they get Anguirus. And then they're in the business of bounty-hunting Toho kaiju, seven billion a head ("Eh, that's a buck for every living person on Earth," he tells an television reporter sticking a microphone in his face. "A bargain, really."

Before the first volume is over, they'll go on to tackle Battra, Kumonga and, in the climactic issue, Rodan and Titanosaurus...simultaneously.

As many monsters as they take down, and as rich as they're getting, they still haven't challenged Godzilla yet, and sinister, human forces are moving against Boxer.

Like I said, I liked the premise, and the way it offers engaging characters with passably relatable conflicts and goals; sure, the characters aren't any deeper than those in any action movie, but they're deep enough to act as an axis around which to rotate the various man vs. monster action scenes and more occasional monster-on-monster violence. 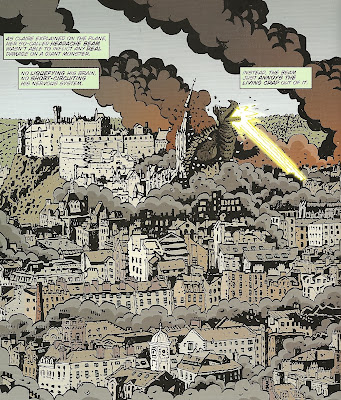 Gane's artwork is pretty incredible, and I'm tempted to say that it's almost as good as Stokoe's, but there takes are so different it's difficult to compare them, and Gane is working as an artist in collaboration with a writer, where as Stokoe was creating almost every aspect of his Godzilla project, giving him a bit of advantage in terms of creating a more personalized version of a Godzilla storyline.

Like Stokoe, Gane finds the perfect balance between making the monsters look like "themselves" (that is, rubber suits) and looking realistic. Godzilla, Rodan and Titanosaurus all have an authentic, unnatural look about the way they stand, pose and move, while Anguirus, Kumonga and Battra look much more natural, like things that could conceivably exist in nature, things that could survive outside of a Japanese monster movie.

He's better still at the human characters, all of whom are slightly exaggerated and extremely distinct in design, and Gane is aces when it comes to drawing buildings...and then wrecking them. It seems as if every panel of the book includes a cloud of broken glass, clouds of smoke and storms of rubble.

It's an all-around pretty great Godzilla comic, which disappointed me a little, as it mean now I have to buy the next two volumes, if I want to find out what happens next, and how it all ends. (It's my understanding that the Swierczynski/Gane "ongoing" lasted about 18 months or so, as my local comic shop had three volumes on the shelf, and the last page of the third volume said "The End" on it.)

Now let's look at some covers. There were, obviously, lots of covers for the comics in this collection—13 covers for just four issues, if I counted correctly.

I understand that the vagaries of comic shop retailing somewhat necessitates that publishers who aren't DC or Marvel publish lots of variant covers, but, as a consumer, the practice is generally just a further incentive to trade-wait, as if the trade collections generally include all the covers (In this trade, for example, covers appear between the issues, and then there's an "Art Gallery" in the back, containing all of the variant covers that weren't previously shown in the collection, each unencumbered by text.

There were four covers for the first issue; two of them were by excellent monster artist and Guy Who Previously Drew Godzilla For Dark Horse Arthur Adams. This is one of 'em: 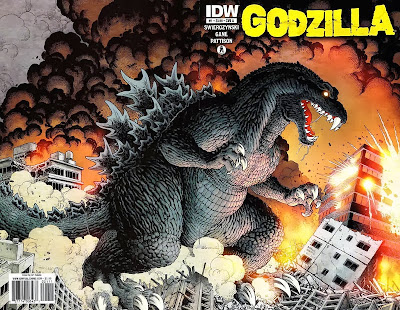 The other Adams cover was just a black and white version of that. I really like Adams' Godzilla on that cover. No, it doesn't really look like Godzilla, but it does look like Godzilla might look were he a real theropod dinosaur of some kind. It's weird how Adams draws the face and head so realistically, but the tail is still segmented.

Of the other artists that contribute covers (Ryan Kelly, Tony Harris, Zach Howard), Matt Frank draws the versions of the monsters that are furthest divorced from their rubber suit-and-puppet origins.

Check out his Rodan and Titanosaurus: 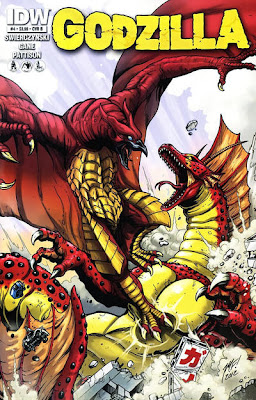 Very cool-looking, although there's no way I would have guessed that monster on the right was meant to be Rodan, had I not read the comic that appeared under that cover. I like the way Frank makes the monsters his own, adhering to the basics of the design, but not bothering to adhere to the real-world, live-action limitations that defined them. That said, I also like the way Gane and Stokoe drew them, incorporating the limitations-inspired design into their drawings. I'm honestly not sure what the best approach is, as both have their virtues. So I'm glad IDW had Frank do these covers, as his approach differs so greatly from the interior artists I've seen so far (Gane, Stokoe and Phil Hester, whose Godzilla: Kingdom of Monsters Vol. 1 I'll discuss this weekend).

On the opposite end of the spectrum, here are the same monsters fighting as drawn by Jeff Zornow, who accentuates the goofy, guy-in-suit nature of their designs: 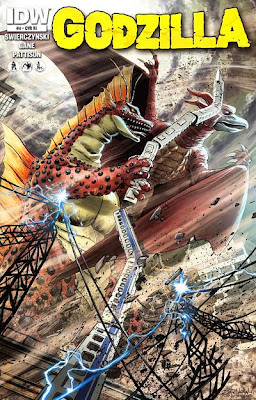 That image cracks me up.

Here's another Zornow cover, which is a nice portrait type cover of Anguirus... 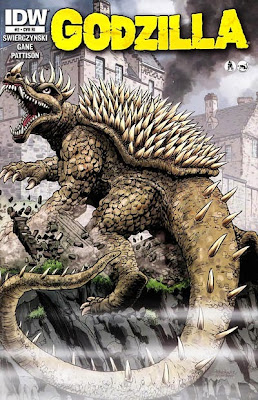 ...even if the image lacks the slap stick of one monster bonking another on the head with some form of mass transit.


*Like a lot of creators since the relaunch, Swierczynski didn't stick around all that long—almost a year and a half—but I don't recall any particularly angry interviews or accusations of editorial interferences, so I'm assuming he left BOP under amicable circumstances...? Or was I just not paying attention, having had no interest at all in a Birds of Prey comic that departed from the central premise of concept, former Batgirl Barbara "Oracle" Gordon teaming with former Justice Leaguer Black Canary to fight crime on their own terms...?

**Although there's a bit of Bruce Willis in him too, I think...or maybe that's just the fact that he spends much of the first issue imperiled in a skyscraper making me think that? Matt Frank's variant cover for the second issue is even more Bruce Willis-y. Like, a Moonlighting-era Willis
Posted by Caleb at 12:04 AM