The completely prose-free collection of Sam Henderson's wordless strip, Scene But Not Heard 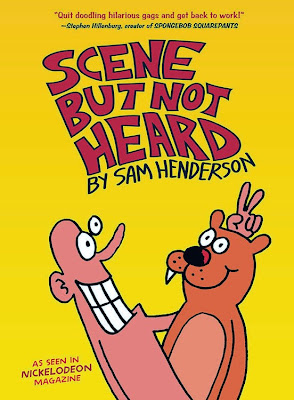 "Funny" is a hard thing to define, let alone quantify. Generally, an individual either finds something funny or they don't, and any discussion regarding ranking or rating different kinds of funny can get vague and meaningless pretty quickly. So I can't honestly say with any sort of certainty, nor can I produce an elegant argument to back it up, that Sam Henderson is one of—if not the—funniest cartoonists whose work I've ever encountered.

I can say that I've never read any work of his and not enjoyed doing so. And that I've never regretted any time spent with a Henderson book or cartoon. And that even his worst work is still funny, in an anti-joke way that can be just as funny as a pure joke joke. And that, along with Johnny Ryan, he's one of the only artists whose books I used to be able to leave out at the house I shared with friends in Columbus, and every single person who lived under that roof and every single one of their guests would pick it up, spend at least a few minutes with it and find themselves in hysterics (Tony Millionaire was a third cartoonist with a similar effect, however only his Maakies; visitors might flip through a Sock Monkey or Billy Hazelnuts, but not feel compelled to sit down and read it the way they would a Magic Whistle or an Angry Youth Comix).

This book, a co-publication of Top Shelf and Alternative Comics, collects Henderson's strip from Nickelodeon Magazine, a publication I have never read or seen in the wild, but which has a pretty great reputations for having given work and exposure to some really great cartoonists. It was a kid-friendly publication, obviously, so there aren't any dick jokes in here, nor any butt jokes that I remember, which might seem weird, as kids love butts and jokes about butts, but this is Henderson not only at his most family-friendly, but also at his classiest.

The premise for the strip, for any of you reading this who have also never read Nickelodeon Magazine, is that there's this guy, a typical Henderson guy, and this animal—I thought it was a cat or dog until page 96, in which the two are apparently running against one another in an election, and the podiums they stand behind read "Man in '04" and "Bear in '04." So it's a bear, I guess. (Sadly for America and the world, it was a man who won in 2004, and not some random bear.)

And this man and this bear, they do stuff. Funny stuff. But they never speak. And, um, that's it. That's really all there is to it. Sometimes they're roommates. Sometimes they seem to be little kids, and siblings at that. Sometimes one is a doctor and the other is a patient, or one a motorist and the other works at a gas station, and so on. It's a very open, very old school, Vaudeville-inspired, Golden Age of Animation sort of style of comedy. Silent film comedy on paper.

It helps that everything Henderson draws is pretty funny simply by virtue of the fact that Henderson drew it; he has one of those very naive, very primitive "Hell, I could draw that!" styles that is actually really, really hard to imitate (I've tried it a couple times, making illustrations for blog posts here in the past). It's extremely loose and often pretty vague; the bear is a very detailed character for Henderson, in that he has, like, distinctive features, rather than just being a funny pair of eyes and mouth on a human-shaped outline guy.

Most of the gags revolve around the rule-less physics of comic strips and cartoons, and, read all at once, this book seems like a grand symphonic performance of the unique possibilities for jokes in the comics medium.

There weren't any words, and yet it was still somehow one of the best things I've read in like forever.

It's a two-page, 18-panel comic called "Sam Henderson Changed My Life" which seems to include a whole bunch of lies, including what has to be the world's most unflattering portrait of Henderson.

Van Sciver proudly calls himself "part of the Henderson Generation" of cartoonists, and shares a"some of the great things about being like" he and Sam: 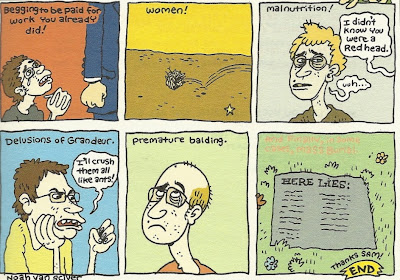 At the end of the book, there's a two-page interview with Henderson, in which each of the questions asked of Henderson is answered by a quick, doodly, wordless drawing: 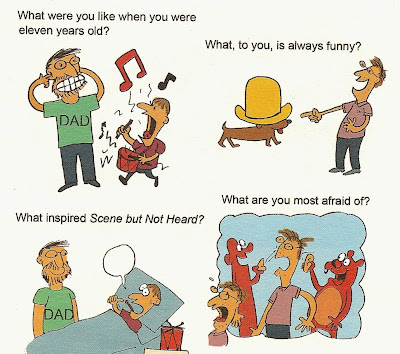 That is pretty much a perfect interview with a comics professional (And dogs wearing hats? That is always funny isn't it? But I still wouldn't know how to rank it against other things that are always funny, things like Noah Van Sciver comics about comics creators, or Sam Henderson comics, you know?)
Posted by Caleb at 9:42 PM

I was just remembering today these Chinese comics I picked up while in Malaysia called Lao Fuzi, or Old Master Q. They had little to no dialogue and were basically purely visual gags, and even when there was talking [which I never got since I don't read Chinese] it was still easy to understand the joke.

Considering that you described Henderson's work as being sort of universally hilarious I'm particularly interested as to your opinion on these comics.