This month's look at Marvel Entertainment's solicitations offered me another of those "Whew, thank God I'm not a retailer!" moments, as all I have to do is try to figure out how to find and read the damn things, rather than make decisions involving money and a whole bunch of customers based on vague, cryptic information and some incredibly poor titling and marketing.

So here are Marvel's solicitations for what they intend to publish in June of this year. And below are some thoughts on them.

So check out all the information they give retailers and potential readers on some books that I'm assuming must be tie-in to their Original Sin event series:

Note how little actual info there is there: Title, creative team, ridiculously high price, mention of a "bonus" digital edition so some readers won't feel like the publisher is over-reaming them and...that's it. How do retailers figure this stuff out? For Fantastic Four, do you order on some formula that is like JAMES ROBINSON FANS + LEONARD KIRK FANS + PEOPLE WHO READ FANTASTIC FOUR EVERY MONTH - ANY OVERLAP BETWEEN THOSE FACTORS, and, like, add six for the tag line or something...?

But this! This is like a trifecta of WTF, a triwhatthefuckta. So, in addition to the big, twice-montly, eight-part miniseries Original Sin, Marvel is also publishing a tie-in series called Original Sins, plural? And between issues of the series, they're publishing a whole miniseries worth of material, designated by number decimal point as being part of the main series, but a less important part of that series...?

As someone who will eventually read this in trade, I hope it's collected in a way that makes some small amount of sense.

Hey, any of you guys Marx Brothers fans? Have you seen A Day at the Races? Particularly the Tutsi Fruitsi scene, where Chico cons Groucho into buying more and more books to make sense of his original investment? For some reason, I don't know why, I suddenly remembered that scene while reading these solicitations... 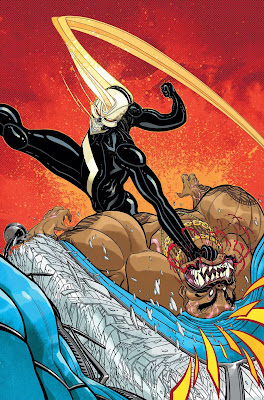 ALL-NEW GHOST RIDER #4
FELIPE SMITH (W) • TRADD MOORE (A/C)
VARIANT COVER BY FELIPE SMITH
“ENGINES OF VENGEANCE”
• The streets of East LA flare up with drug-fueled gang violence form DR. ZABO’s power-enhancing narcotic.
• Will ROBBIE REYES submit to the sprit inside him and go too far in protecting the neighborhood?
• What is MR. HYDE’s diabolical plan to expand his underground empire?
32 PGS./Rated T+ …$3.99

Oof. The old super-drug plot, huh? I felt like I had read some 750 superhero comics involving narcotics that grant or are based on the abilities of super-people years ago, so, um, well, this doesn't sound the least bit interesting.

But hey, look at that cover! It sure looks interesting! All I've seen of Tradd Moore at Marvel so far are his covers, but I'm really looking forward to seeing if his interior art is as clear, crisp, fluid and action-packed. 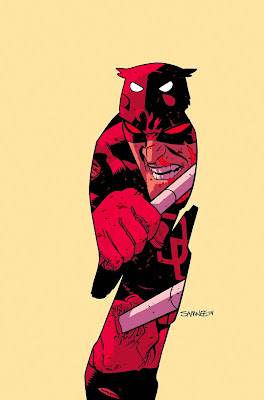 DAREDEVIL #4
MARK WAID (W)
CHRIS SAMNEE (A/C)
• The Owl is back! But he’s not working alone! Watch as the Daredevil team permanently redefines one of DD’s oldest enemies deadlier than ever! Plus--whatever happened to Foggy Nelson?
32 PGS./Rated T+ …$3.99

That's a damn fine cover Samnee put together for this issue of Daredevil. From afar, it actually looked like a Mike Mignola one in it's basic design and in the owl image...on closer inspection, it looks like a Samnee drawing inside a Mignola cover.

Now what's this about The Owl being "back"...? He's been in Superior Foes of Spider-Man for months now! 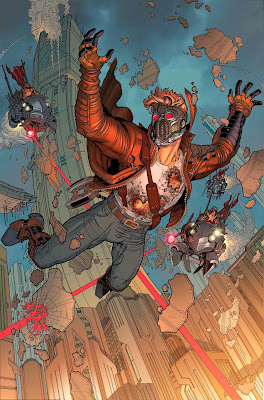 GUARDIANS OF THE GALAXY #16
BRIAN MICHAEL BENDIS (W) • NICK BRADSHAW (A/C)
• Starlord on the run from a mysterious new adversary— alone without the aid of the Guardians!
32 PGS./Rated T …$3.99

Is that Starlord on the cover! If so, Booo! I am not down with giving him a new coat in order to make him look more like the movie version of himself!

I see Nick Bradshaw is the next excellent artist Bendis is working with on this title. That' funny; I've been reading Wolverine and The X-Men in trade, and I was just wondering where Bradshaw was headed now that Jason Aaron's run on the book is over and it's been rebooted. I think Bradshaw is a pretty incredible talent, and I hope he finds and keeps a book he can almost kinda sorta make his own, the way he almost kinda sorta did with Wolverine and..., although with Marvel's current shipping practices, it's pretty much impossible for any one artist to define a title anymore. 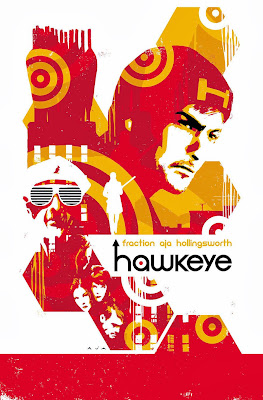 It's another issue of Matt Fraction and David Aja's Hawkeye, sans Aja. I like Wu's art just fine, but I'm kinda confused by this book of late. I thought it was settling into a groove of Wu on Lady Hawkguy in L.A. one issue, Aja on Hawkguy Prime in NYC the next issue...?

Also, I don't like the sound of that story title or the description of the book. Makes it sound like Hawkeye is winding up, and heading for a reboot, if not cancellation.

Also also, while that's a nice-looking cover, I'm kinda sick of the style of the covers and the color scheme Aja has been employing on them. Too many of them look too much like too many other Hawkeye covers. I've actually missed a couple of issues because I can't tell them apart on the rack (and my shop forgot to put to put them in my pull file, as they sometimes do).

The New Avengers Vs. The Great Society, huh? That's a fight I never expected to see. 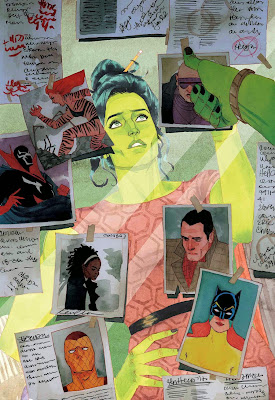 Well, whatever's going on with this conspiracy that touches the entire Marvel Universe, Spawn is definitely involved. 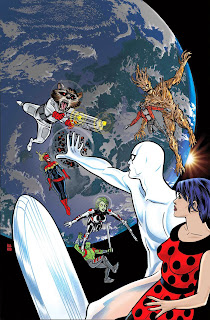 SILVER SURFER #4
DAN SLOTT (W) • MICHAEL ALLRED (A/C)
• In order to return alien abductee Dawn Greenwood home, the Surfer must travel to the one place in the galaxy he dreads the most... Planet Earth!
• And what should be a quick drop off turns into turns into one very... strange adventure.
• Featuring: DOCTOR STRANGE, THE INCREDIBLE HULK, and some surprise guest stars. Including those movie stars on the cover!
32 PGS./Rated T+ …$3.99

Let's see, Silver Surfer, Doctor Strange, The Incredible Hulk...I sure hope one of those surprise guest stars is Namor, The Sub-Mariner. 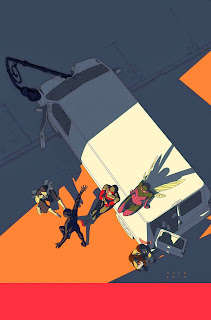 THE SUPERIOR FOES OF SPIDER-MAN #14
STEVE LIEBER (W/A)
Cover by KRIS ANKA
• A year of duplicity and double crossing leads to this – who will live, who will die, who will get the head of Silvermane?
32 PGS./Rated T+ …$3.99

Yikes. I like the sound of this solicitation even less than I do the one for Hawkeye, as it sounds kinda final. Also note that regular artists Steve Lieber is both writing and drawing, rather than simply credited with "A." And then there's that price change. Don't leave us, Superior Foes of Spider-Man...!

Or, if you must, can you just re-boot yourself into a $2.99 All-New Sinister Five, with the same creative team? I'd probably be okay with that. 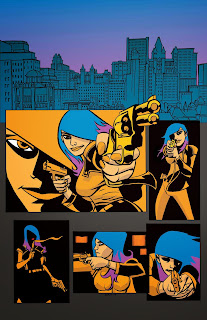 THE UNITED STATES OF MURDER INC. #2
BRIAN MICHAEL BENDIS (W) • MICHAEL AVON OEMING (A/C)
VARIANT Cover by BRIAN MICHAEL BENDIS
VARIANT Cover by DAVID MACK
This new crime epic saga from the creators of POWERS continues! Welcome to a world where the influence of organized crime has risen to a place where parts of the United States are actually fully controlled by the five families. At the end of last issue, the biggest secret in history of the five families was revealed! The newest made man, Valentine, now must figure out how he and his associate, Jagger Rose, are supposed to continue on knowing what they now know. Every issue delivers powerful visuals by Eisner Award winner Michael Avon Oeming and a story by the writer of some of your favorite Marvel comics including ALL-NEW X-MEN!
32 PGS./Mature …$3.99

I just wanted to note this one because I think it's cool and kinda cute how Bendis keeps doing this creator-owned stuff with Marvel, where it doesn't get noticed the same way it would if he published it...pretty much anywhere else.

Also, I have completely lost track of all the similar projects Bendis has done in the last few years. Whatever happened to that weird Scarlet book that I think people might have reviewed the first issue of? Was that completed, or did the creators abandon it? What about that kids comic Bendis was doing with Oeming...Takio, I think it was...? Or his movie pitch comic with Mark Bagley (Brilliant?)....?

Oh hey, I just notice the "VARIANT Cover by BRIAN MICHAEL BENDIS" up there when I was going to delete the variant cover info...that's cool. I can't remember the last time I've seen a Bendis drawing...
Posted by Caleb at 9:25 PM

I think I've mentioned it before, but if your coolio library has the Luther Strode trades, you really ought to check them out. The story is pretty good, but Tradd Moore's art is amazing (and really, really violent). In case you don't want to wait to check out his work on Ghost Rider!

I am not a fan of Starlord's movie suit too. I prefer the one he wore during D and A's Guardiansf the Galaxy run

Not that I have anything against Javier Pulido, but I'm picking up She-Hulk #5 for the sole reason that Ron Wimberly's on art.

No, I haven't read any of the other issues. That's how big a pull he is for me.

Takio is completed (or at least an arc) and collected into trade; looks to be a good YA choice, maybe somebody you know who reviews all-ages books could give it a look.

Scarlet seems to get a new issue about once a year.