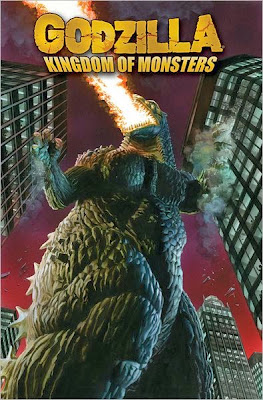 This is the third trade collection of an IDW Godzilla series I've tried, and, like the others I've tried, it has an extremely interesting, "Hey, I'd like to see what those guys would do with Godzilla and friends!" creative team involved, and it featured not just the title character, but several other Toho Studios monsters (In this volume, we see Anguirus, Rodan and Battra, with Mothra foreshadowed—and appearing on a variant cover. Kumonga and King Ghidorah also make variant cover-only appearances).

I think that speaks quite well to the fact that IDW was pursuing a smart strategy of putting together strong creative teams by creators who weren't the most obvious of choices of giant monster comics, and it speaks to how aggressively—too aggressively?—the publisher was seeking to exploit the license. This title, for example, is completely unrelated to the other two I read (Godzilla: The Half-Century War and just plain Godzilla). It's so different, in both its look and conception, I think its existence is justified, but it does make coming to the franchise a little late (even just wait-for-the-trade late) difficult.

The team on this particular book, which Wikipedia reminds me was IDW's original Godzilla offering and was a 12-issue series that has since been completely collected, consists of co-writer Eric Powell, best-known as the writer/artist for his Dark Horse series The Goon (and, now that I think of it, some pretty swell Marvel monster comics), pencil artist Phil Hester, probably best known for his collaborations with writer Kevin Smith (Green Arrow for DC, Clerks: The Lost Scene for Oni) or the short-lived Marvel series The Irredeemable Ant-Man. Powell's co-writer is Tracy March, and Hester is inked by a Bruce McCorkindale (And while Powell's just writing this series, he does provide some of the many covers as well, for Powell fans who want to see how the writer-who-is-also-an-artist draws Godzilla and some of his frenemies; we'll look at some covers near the bottom of this post).

This story is set in modern times, and, unlike the Swierczynski series, in which Godzilla has been a fact of life for a while, this is apparently the first appearance of any giant monsters on Earth. The big guy appears in a weird opening scene in which two little Japanese kids play on a beach, when they suddenly notice the gigantic tail of a diving...something. Godzilla appears next on a two page spread, SKREEEEE-ONK-ing as he eats the children in a huge mouthful of sand, like some sort of gigantic organic steam shovel surfacing through the beach itself.

The Japanese try to missile the monster to death to no effect... 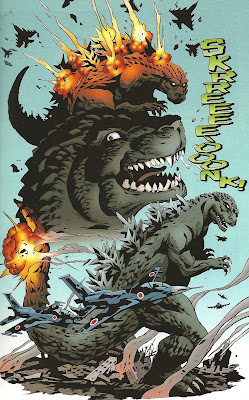 ...and when he gets out to sea, the U.S. tries a sub-launched nuclear missile, which only has the result of making Godzilla grow larger and start breathing his blue radioactive fire (not the traditional orange fire that Alex Ross has him breathing on the cover there).

The first issue/chapter ends with President Obama seeing the news, and reacting the same way his Japanese counterpart did upon learning that the nuke only made Godzilla stronger and gave him a new weapon. 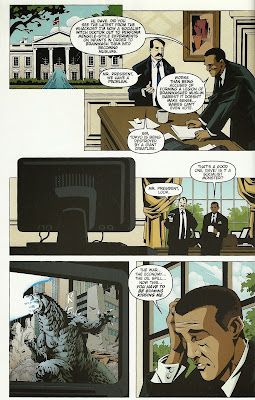 "You have to be @%$#ing kidding me" is to Kingdom of Monsters as "I've got a bad feeling about this" is to Star Wars, apparently.

Meanwhile, weird shit is happening all around the world, like cattle, crows and swarms of cicadas suddenly dropping dead out of the world. Second monster Anguirus emerging from the ground in Texas, and running, jumping and rolling its way toward the U.S. border. In Russia, a little boy nicks a museum piece during an earthquake, and out of it hatches a baby pterodactyl, which grows into Rodan in the space of a bout a day.

Meanwhile, an enormous Mothra-like egg is discovered in France, and two mute but enormously powerful psychic school girls find it, and control the monstrous larva that emerges, whom they name Battra.

The worst news of all, however, is that when Godzilla's through with Japan, he heads to the U.S., and he and Anguirus or on a collision course in Los Angeles.

What's different about this book is the focus on the human characters, and the fact that there are so many human characters, all around the world. Many look and sound familiar, while many more are introduced just to die. There's the aforementioned President Obama, who we first meet talking to an advisor named David who looks an awful lot like Obama's advisor David Axlerod; it's not until near the end of the second issue that he's referred to as President Ogden. Similarly, we're introduced to a pop singer known for wearing outrageous get-ups, like this one, for example... 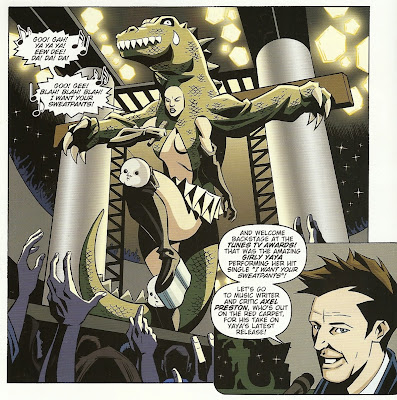 ...who is called "Girly Yaya" (Get it?). There's a very popular TV show about vapid young people from New Jersey, and the cast appear a few times throughout; the name of that show is Jerseyfied (GET IT?!).

There's the father of the two kids eaten in the opening scene; a coupe of red neck stereotypes that plan on teaching Anguirus no to mess with Texas (not unlike the gun nuts who appear in Swiercyznski's first issue, actually); the Governor of Texas who believes his anti-immigrant wall can keep Angie from crossing the border; the little Russian boy who hatches Rodan, and so on.

Likely, non-monster protagonists seem to be Sergeant Steven Woods, recent recipient of the presidential medal of honor, and/or maybe the psychic twins controlling Battra's larva...at least, these are the fictional, non-parody characters original to the series.

For the most part, Powell and Marsh seem to deploy these characters either to emphasize how small and insignificant single human lives can be in relation to the titanic monsters (a point made ultra-clear when one tries to suicide-bomb Godzilla in revenge, and does nothing more than briefly confuse the King of the Monsters by popping like a bubble on his snout. They also seem to be making some rather broad statements about the shallowness of American culture—both political and entertainment culture—but the targets are so easy, and the criticism so broad and unfocused, it's hard to guess what they're saying exactly. Maybe something along the lines of if atomic age originally ushered in these monsters via film, they are now being summoned by a nihilistic and destructive culture...? I don't know.

Some of it's funny, I guess, but it seems to lack a point...or, if there is a point, its so dull that it barely pokes, let alone pierces and draws blood.

The President "Ogden" business grates, too. I've always been irritated by such half-measures of using analogues in comics, particularly ones that are completely obvious and completely unnecessary. I suppose Lady Gaga and the cast of The Jersey Shore (which I have to assume was still a relevant target when this series launched three years ago then it it is today) might have their images or names trademarked or copyrighted or could make arguments that their likenesses and names are their means of financial gain, and thus this little, barely-read Godzilla book (surely even it it outsold every other book in the direct market, its audience would still be practically molecular to that of Lady Gaga and the folks from that dumb TV show were garnering at the time). But President Obama? Public figures don't get more public than him, and there's hardly any way to use Obama's name and likeness that wouldn't be considered fair use. (Anderson Cooper and Wolf Blitzer appear too, but; they're only partially named, kinda like David Axelrod is in his appearance).

I've always been of the opinion that if you have something to say, just say it, rather than hiding behind passive-aggressive, half-ass, it's-a-parody-but-not-really name-changing. Jersified's "The Predicament" is The Jersey Shore's "The Situation," and you're not fooling anyone, guys.

My favorite of Hester's Godzillas is the one that appears on the variant cover for the second issue, which appears unencumbered by text in the "gallery" section at the back of this book: 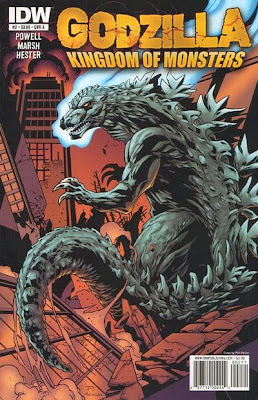 Note the elongated snout, that makes his Godzilla look like a slightly more realistic creature—ditto the longer, thinner arms and the fact that you can't see whether his legs are a pile of fat rubber folding in on itself or not. Hester's Godzilla, especially in that image, looks like he could whirl in any direction and take off at a run at any second, rather than simply trudging and plodding.

Hester's interior Godzilla never looks quite that elongated, but he's definitely a slimmer, more muscular, less fat and unwieldy-looking monster than the man in the suit...or, come to think of it, the ultra-faithful Alex Ross version on the cover of the trade collection. In general, he and/or McCorkindale seem to use fewer lines in their creation of Godzilla's scales, and on his fellow monsters Anguirus and Rodan. The over-all effect is that the monsters look a little less carved and a lot more drawn. The design is still tight, but the texture is smoother and more polished. They all reminded me a bit more of large, living gargoyles than articulated toys and costumes, like Hester was losing some of the detail of the suits in order to achieve something more appropriate for a comic.

Of the three series, this is probably the weakest, but it is maybe also harder to judge simply by the first volume than the Godzilla series was, as its premise isn't so quickly and throughly defined.

Here's one of the Powell covers, featuring three of the monsters: 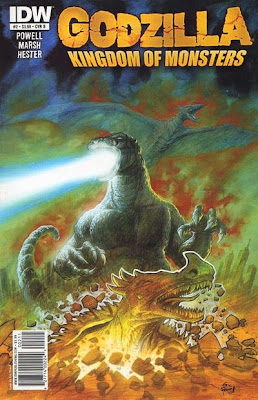 There are three additional Powell covers in this collection, plus a fold-out, three-page image featuring monsters from these issues and several monsters who have yet to appear in the series.

Matt Frank's art is also represented by several covers; I like his Mothra one best: 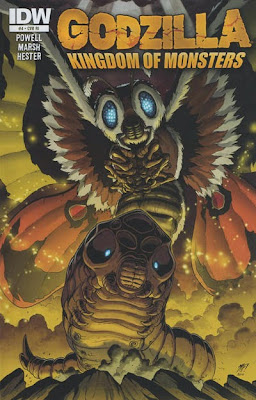 The remainder of the covers come from Jeff Zornow and Paul Hanley. There's only a single image by Hanley, so it's hard to judge his skill at drawing giant monsters, but Zornow, whose variants are attached to some of the other Godzilla comics as well, is pretty great at it.
Posted by Caleb at 8:51 AM

I didn't care for this IDW series at all. I didn't want to read a book spoofing American pop culture - I wanted to read a Godzilla/Kaiju book. Also, way too many kid deaths for my taste.