Review: Vengeance of The Moon Knight Vol. 2: Killed, Not Dead 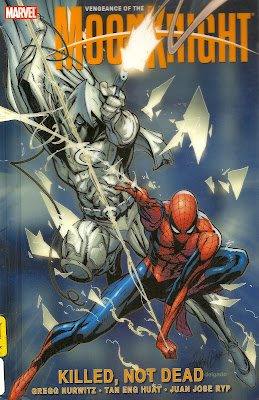 The second trade collection of the Gregg Hurwitz-written Moon Knight monthly, Vengeance of The Moon Knight is on much surer footing than the previous one, with shorter, sharper stories, each of which features at least one more-popular-than-The Moon Knight guest star, and each of which pull a little further back from the Moon Knight Is A Bloodthirsty Lunatic Trying Not To Kill plot line.

I think it also helps that here Hurwitz is paired with two different artists than his first partner, both with clearer, cleaner styles, and both markedly better about some of the basics of telling stories in comic book form. At least this time out, I’ve seen clear shots of some of the character’s faces, and could now identify Samuels and Frenchie on sight. Still not sure about Marc Spector/Jake Lockley, Moon Knight’s secret identity/-ies. There’s only two panels in this featuring his face, I think. (Which is better and more panel-time than his girlfriend, what’s-her-face, gets; she only appears in a single panel, as a pair of naked legs rising out of the soapy water of a bubble-bath, and a come-on line of dialogue, coming from a head somewhere off-panel.)

The first two issues, which tell the story from which the collection takes its sub-title, are drawn by Tan Eng Huat. His style has changed quite a bit since editor Andrew Helfer introduced him the North American direct market in one of the (many) doomed Doom Patrol launches way back in 2001, but even as he grows more experienced and comfortable drawing superheroes and tuning his style closer to the standard superhero wave-length, his artwork retains a sense of weird, awkward energy.

The guest-star in these Huat issues is Deadpool, and he’s taken a contract on a very old man dying of stage four colon cancer in a hospital; the lady who hired Deadpool wants the man killed violently, not dying peacefully, in revenge for his ordering the kidnapping and murder of her child (Thus the story and collection title, "Killed, Not Dead"). It is something this terrible very old man has done a lot of over the years and, in fact, he has a kidnapped child waiting to be ordered killed as the story takes place.

In traditional Marvel style, Moon Knight and Deadpool meet and fight. But instead of teaming up, they simply continue to fight. Oddly, neither character seems to know who the other is. Neither are at the top of the heap of Marvel’s character hierarchy obviously, but they’re not the most obscure characters either. I guess I just assumed every character had met every other character, by this point.
The art’s a little weird here, with some of the action not quite working right, and Deadpool somehow managing to beat blood out of The Moon Knight’s face without getting any on the face mask it must have come through, but it’s a better-looking couple of issues than those in the first volume, and one that manage to retain the same level of darkness and gritty, over-lined work.

The last two issues are drawn by Juan Jose Ryp, a better artist still. His is the smoothest, cleanest art we’ve seen on the series so far, and he has the strongest, clearest figurework and design of the three. His The Moon Knight gives readers the best look at The Moon Knight and his new, over-armored The Moon Knight costume we’ve seen (and really the ninth issue of an ongoing monthly series probably isn’t the ideal time to have a good artist start introducing the character visually).
Ryp also uses a lot of lines, including that almost pointillist form of cross-hatching he does to imply texture and shadow. But his lines are careful, giving every panel a really remarkable amount of detail and breakground, without subsuming the figures into it. A Hurwitz/Ryp series would have really been something to see.

Ryp draws two done-in-one issues. The first of these is a Spider-Man team-up (where the cover comes from), and the second is a Secret Avengers team-up (Moon Knight joined the Secret Avengers, after all; this issue opens with former Captain America Commander Rogers, who had taken over Norman Osborn’s job as Boss Of All Superheroes after the events of Siege, and takes us along on a mission with them, as seen through The Moon Knight’s eyes and read through his narration.

The Spider-Man team-up has the pair trying to stop a robbery by The Sandman, who makes his escape in a gigantic form. I can’t think of an artist better suited to drawing the Sandman, a character literally made up of the little, grainy dots Ryp likes to dapple his work with, and there is just scene after scene of Sandman moving like a sandstorm and reforming. There’s a particularly cool scene set in a museum, where the heroes quietly stalk through taxidermied animals, seeking the hidden and disguised Sandman.

For the Secret Avengers issue, we see Rogers approach Moon Knight, then flashforward to a mission briefing and an attempt to rescue hostages from modern pirates, the leader of which is armed with a pair of super-weapons, one of which they were expecting and one of which they were not. Unlike the later Warren Ellis-written Secret Avengers stories, there’ s no science or espionage really needed on this mission, and nothing clever about its construction or what it asks of the heroes. They basically function as a superhero SWAT or SEAL team, dropping onto the boat and non-lethally but extremely violently dealing with the pirates.

This gives us an opportunity to see Ryp draw not only The Moon Knight and Commander Rogers, but also an Ant-Man, Beast, Valkyrie, War Machine and Black Widow.
Ryp comes up with a nice solution to the zipped or unzipped question when it comes to Black Widow, first drawing her almost completely unzipped, but in the act of zipping up, as she will remain for the rest of the story. Cake and eating!

There’s not a whole lot to this aside from a big fight scene, of course, but it sure is a well-drawn fight scene, and The Moon Knight takes a weird shot with a bow and arrow that I didn’t think anyone in the Marvel Universe outside of Hawkeye would or should be able to make.

When speculating on possible reasons for the relative not-very-good-ness of Vengeance of The Moon Knight Vol. 1, I mentioned that it launched as part of the “Dark Reign” status quo, and thus had to tie itself into the overall Marvel Universe mega-story of the time. Here, “The Heroic Age” branding initiative started during the Deadpool team-up.

Like “Dark Reign,” “The Heroic Age” wasn’t a storyline so much as a branding initiative, a temporary dawn after the dark, stormy night of the previous cycle of crossover stories. During "The Heroic Age," Captain America Steve Rogers came back to life, helped the heroes defeat the villains that were running the world, and then became The Boss, replacing Osborn (who had replaced Iron Man, who had replaced Maria Hill, who had replaced Nick Fury I). The idea was to get back to basics, back to business-as-usual super-heroing, which is why I think we see a story as simple as Spider-Man and Moon Knight team-up to stop The Sandman from stealing a diamond, or even The Secret Avengers beat the shit out of some bad guys and that's the whole story kind of story.
Posted by Caleb at 6:59 PM