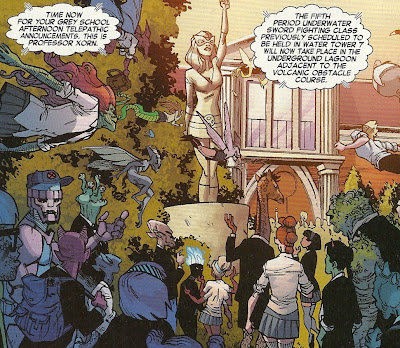 There's an establishing shot of the Jean Grey School of 25 years in the future, and, among the crowd of the New Mutants new mutants is one that is apparently just a bipedal giraffe. I'm not sure if he might have any super-powers of any kind, or if just being a giraffe man is his mutation.

Nor can I imagine what his codename might be...although given that the Class of 2014 includes a guy covered in eyes named Eye Boy and a girl who can turn into a humanoid shark named Shark Girl, I have to assume he would be named "Giraffe Boy," even if that's not all that X-Manly sounding of a name.

At any rate, teenage anthropomorphic giraffe in a school uniform? That's cool.
Posted by Caleb at 7:20 AM

I love the Sentinel with the baseball cap on. Awesome.

Also, is it just me, or is one of those characters a winged version of Goblynn from Alpha Flight?